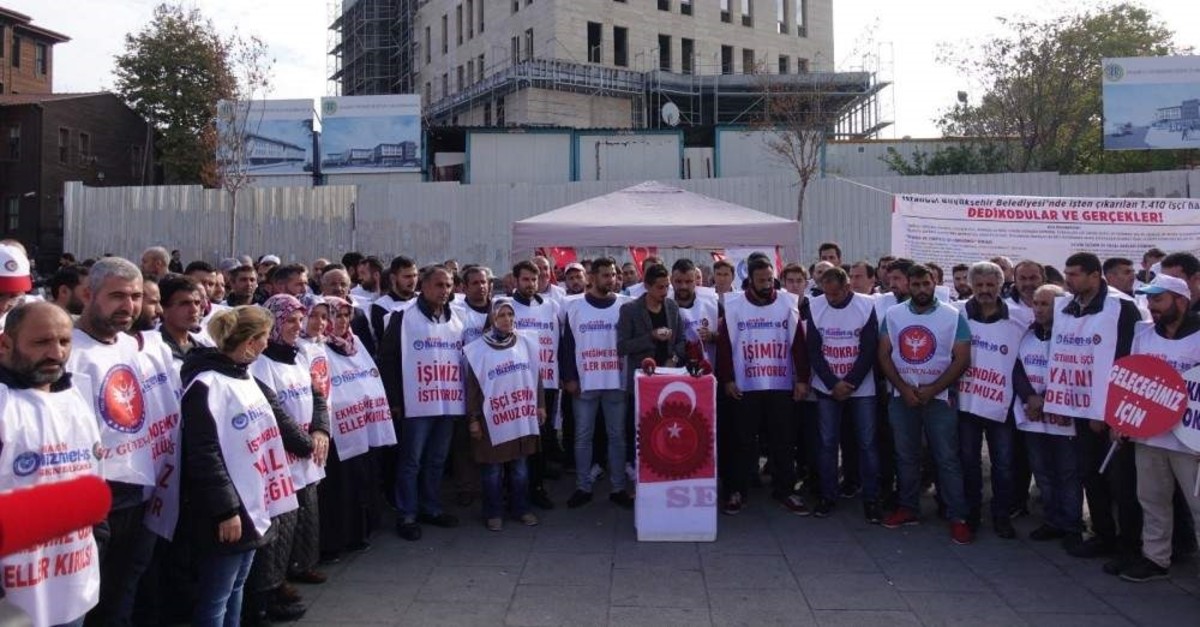 Workers who were fired by the new municipal administration have continued their protest in front of the Istanbul Municipality (?BB) building for 100 days.
by Daily Sabah Dec 04, 2019 5:04 pm

Leaving 100 days behind in their protest to defend their rights and demand justice, hastily dismissed İBB workers demand more support

It has been 100 days since municipal workers who were dismissed from their duties in Istanbul by the newly elected main opposition Republican People’s Party (CHP) administration launched their sit-in protest in front of the Istanbul Metropolitan Municipality (İBB) building. Despite their determination to defend their rights and voice their demands, thousands of workers are not happy about the lack of support for their ongoing protest.
Speaking to Daily Sabah, Umut Aydoğan, a fired İBB worker and a regular attendee of the protests, gave information about the ongoing protests.
He said that there are between 300 and 400 dismissed workers who attend protests on a daily basis and all of them demand justice and their jobs back.
Recalling that a report issued by Parliament on Nov. 11 underlined the rightfulness of protesting workers and suggested that these workers should be given their jobs back, Aydoğan said that they are still expecting a statement from Mayor İmamoğlu.
He said that they will continue their struggle for 1,000 days if necessary until they have their jobs back.
Another point Aydoğan stressed was the lack of support and interest from media, politicians and artists.
“Media, politicians and artists did not give 10% of the support that the public has given,” said Aydoğan, expressing his disappointment and sorrow about the issue.
According to Aydoğan, the best indicator of public support was the 100,000 signatures received in the eight days since dismissed workers opened a stand near Vezneciler metro station in Fatih district.
He concluded by calling on Mayor İmamoğlu to step back from his mistake and give the fired workers what they deserve.
Workers to continue protest under any circumstances

Underlining that İmamoğlu fired thousands of workers despite the promises he gave during the election campaign, Barış Asan, a dismissed worker, said their fight continues and they are undeterred by unfavorable cold weather conditions.

“Although the seasons have changed, our resistance has not ended,” Asan said.

Explaining that they have proven they were doing their jobs properly despite contrary accusations, Asan said, “We are expecting an official statement from Ekrem İmamoğlu. We also want this disgraceful situation in the middle of Istanbul to be ended. It is not a nice view to see people living on the sidewalks in the middle of the city.”

He also said that they will maintain their struggle without causing any physical damage.
“We are talking with many executives. They keep telling us that they have our backs. We no longer want anybody to back us. We want them to side with us. Only saying ‘We back you’ does not mean anything. This phrase is an empty expression for us from now on.”

Muhammet Furkan Doğan, another worker who was fired from his job, said that they are hopeful about the positive developments in the legal process.

“Happy news coming from legal cases serve as a model. It has been 100 days and there are families in difficult situations,” he said and expressed his disappointment about the lack of support to protesters.

Sümeyye Demirci, another victim of the wave of dismissals in the İBB, said they will continue their struggle until the end, under any circumstances. She also complained about the lack of support to protesters in their fair struggle.

Meanwhile, another fired municipal worker, Beytullah Üçler said, “Although I am disabled, I did not use the report about my health condition to take the job. We got the report almost a month ago. I proved that I have a 50% disability. Going to the municipality with my report, I requested my job back mentioning my disability. Nobody paid attention to me. Despite having bad days, we have never lost our belief."

And yet another victim, Mustafa Bilgen, stated that they all believe that they will take their jobs back.

After the June 23 Istanbul election victory, Mayor İmamoğlu mentioned that the rights of all people would be respected; however, the current situation poses a serious contradiction. A large number of workers were fired suddenly without notice from different organizations and agencies run by the municipality. Many of the job terminations were reportedly based on political views, severely contradicting İmamoğlu's campaign promises. The layoffs were followed by protests in front of the municipality in Istanbul as workers demand justice.