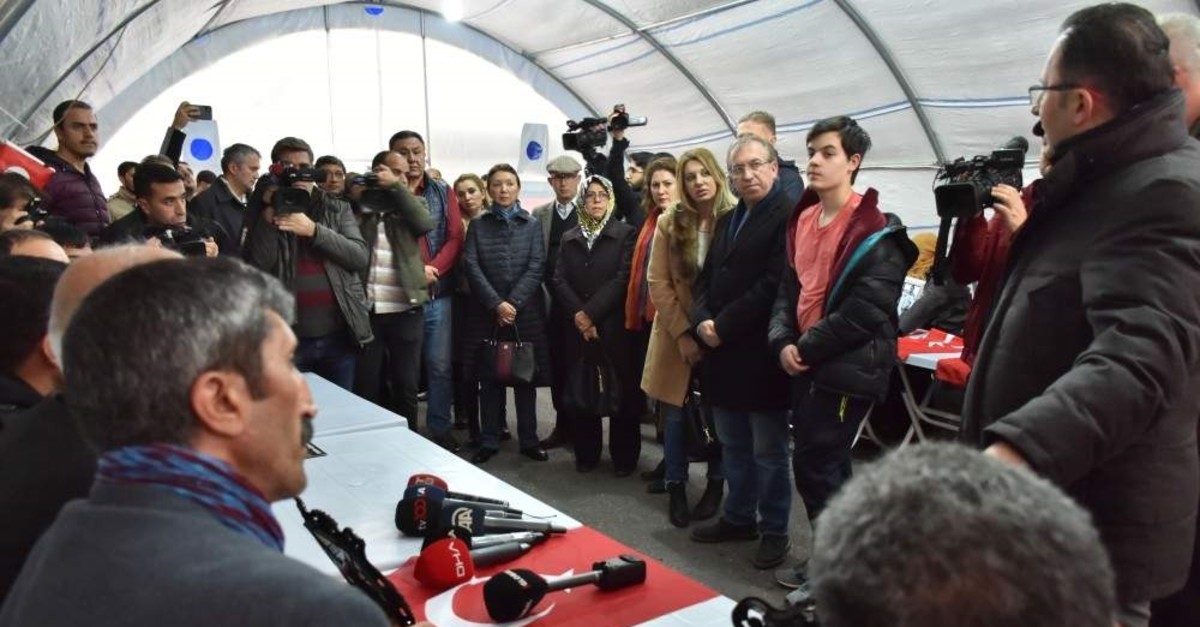 | AA Photo
by Daily Sabah with AA Dec 09, 2019 9:26 am
Nine ambassadors from foreign missions in Turkey paid a visit on Sunday to protesting mothers and fathers seeking the return of their children abducted by the PKK terror group.
The ambassadors of Ukraine, Romania, the Turkish Republic of Cyprus (TRNC), Iran, Iraq, Britain, India and Kyrgyzstan visited families who have been staging a sit-in protest outside the offices of the pro-PKK Peoples' Democratic Party (HDP) in Turkey's southeastern Diyarbakır province.
The HDP is accused by the government of having links to the terrorist group PKK, and accused by the protesting mothers of kidnapping or tricking their children to join the terror group.
"Europe sees the problem as a Kurdish issue, but in fact, it is not," said Aysel Bozkurt, who is seeking the return of her missing cousin. "We are sitting here as Kurds, but they present our children to the group on a golden platter."
Another protester, Süleyman Aydın, accused the HDP of being complicit in the abduction of children. According to the local father, his son Özkan was recruited by the HDP four years ago, when he was just 15 years old.
"The HDP threatens us and blocks our way every day but I'm not leaving without my son," Aydın said during the diplomats' visit.
Aydın also said Monday that there has been a disintegration of the group, and young people had returned by leaving the group and added: “This means we are on the correct path.”
It has been 98 days since Kurdish families launched their sit-in protest to voice their demands of justice for PKK cruelty.
Speaking on the 98th day of the ongoing protests, Süheyla Demir, a mother, said, “We rose against them and will not allow them to have our kids.”
The sit-in protests are seen as a reaction against the outlawed PKK, a terror group that has abducted and recruited their children, as well as the HDP, a political party which many of these families view in league with the PKK.
The protest started when Hacire Akar turned up at the doorstep of the HDP's Diyarbakır office one night. A week later, on Sept. 3, 2019, families inspired by Akar transformed her solo stance into a collective sit-in protest. Akar's son Mehmet returned home on Aug. 24, showing people that there is still hope.
The HDP, long facing public reaction and judicial probes over its ties to the PKK, is under pressure due to this growing civilian protest movement. Various groups from around Turkey have supported the Kurdish mothers in their cause, with many paying visits to show their support.
The HDP is also known for encouraging young people to join the terrorist organization. That is to say, children abducted by the PKK are first radicalized by the HDP. The would-be recruits are then used as an instrument for propaganda and are forced to work. Specialists define four stages of radicalization, the first of which is brainwashing, thereby encouraging the young to join the terrorist organization. This is followed by the armament, violation and finally, leaving to join the organization in the mountains.
The PKK has been involved in a 30-year campaign of terror against Turkey. The terrorist organization is responsible for the deaths of some 40,000 people, including women, children and infants.
Last Update: Dec 20, 2019 2:14 am
RELATED TOPICS