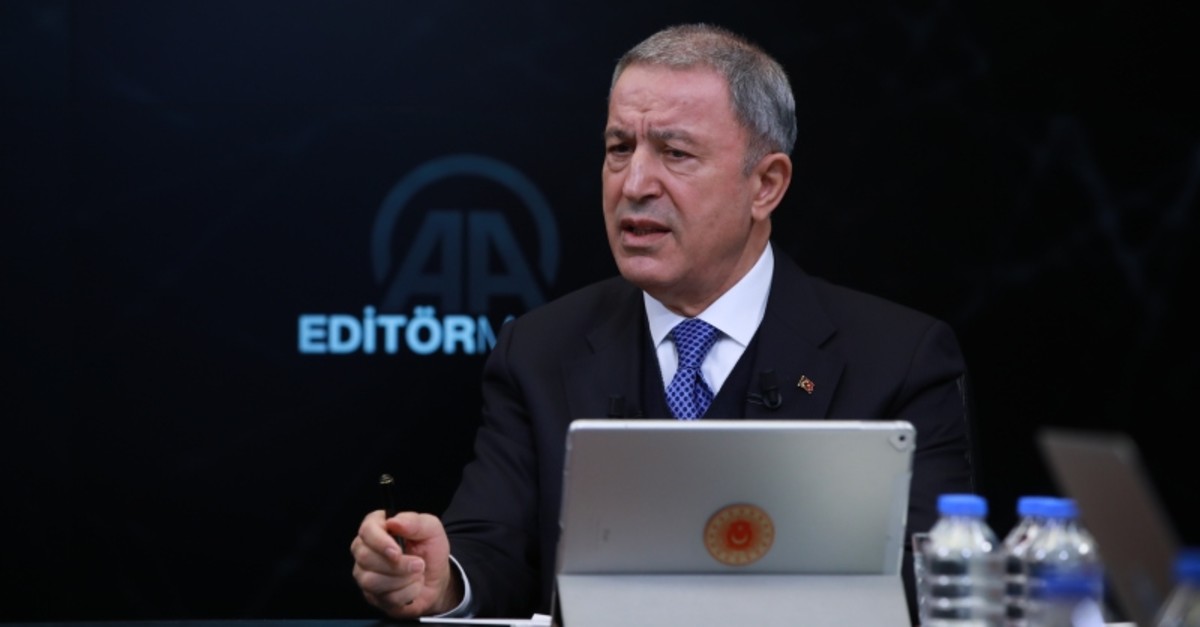 Turkey will continue to protect its rights and interests in the face of regional instability and the failure of allies to display solidarity with the country against terrorist organizations, Defense Minister Hulusi Akar said on Monday.

"When Turkey tries to protect its rights and interests in NATO, the bloc should not consider this attitude as conflictual. The YPG is no different from the PKK and it is out of the question for Turkey to ignore this fact," Akar told the Anadolu Agency's Editor's Desk.
Underscoring the criticval role Turkey plays in the alliance, Akar said the country's southern borders are represent the southern borders of the entire bloc, and so by protecting its borders, Turkey is playing an eactive role in protecting the security of NATO countries and Europe.

Akar reiterated Turkey's concern regarding the terrorist PKK's Syrian offshoot, the People's Protection Units (YPG), saying that the two groups were one and the same.

"The YPG is a terrorist organization and the whole world will recognize this," he said.

Akar stated that Turkey was exercising its right to self-defense in the face of YPG agression on both the group's eastern and western fronts, while the country had taken almost complete control of an area that is 145-kilometer wide, 30-kilometer deep into Syria as part of Operation Peace Spring.

In its more than 30-year terror campaign against Turkey, the PKK – listed as a terrorist organization by Turkey, the U.S. and the European Union – has been responsible for deaths of 40,000 people, including women, children and infants.

On Oct. 9, Turkey launched Operation Peace Spring to clear the PKK-linked YPG from areas east of the Euphrates in northern Syria to secure Turkey's borders, aid in the safe return of Syrian refugees and ensure Syria's territorial integrity. As agreed in two separate deals with both the U.S. and Russia, Turkey has temporarily halted the operation to allow for the withdrawal of YPG terrorists from the proposed safe zone inside Syria.
Ankara wants YPG terrorists to withdraw from the region so a safe zone can be created to pave the way for the safe return of some 2 million refugees from Turkey.

Meanwhile, regarding Greece's expulsion of its Libyan ambassador over a recent maritime deal with Turkey, Akar said the move would not influence the deal's implementation.

"We suggest that Greece approaches the matter with calm, logic and wisdom, and take into consideration international law," the defense minister said, highlighting that the agreement is fully in line with international law. He noted that the deal was not signed against any neighbors, but rather to protect Libya and Turkey's rights and interests in the Eastern Mediterranean.

On Nov. 27, Turkey and Libya's Tripoli-based Government of National Accord (GNA) signed a bilateral memorandum after a meeting between President Recep Tayyip Erdoğan and GNA head Fayez Al Sarraj, took place in Istanbul. The deal enables Turkey to secure its rights in the Mediterranean while preventing any fait accompli maneuvers by other regional states.