Turkey to send troops to Libya 'if requested to do so' 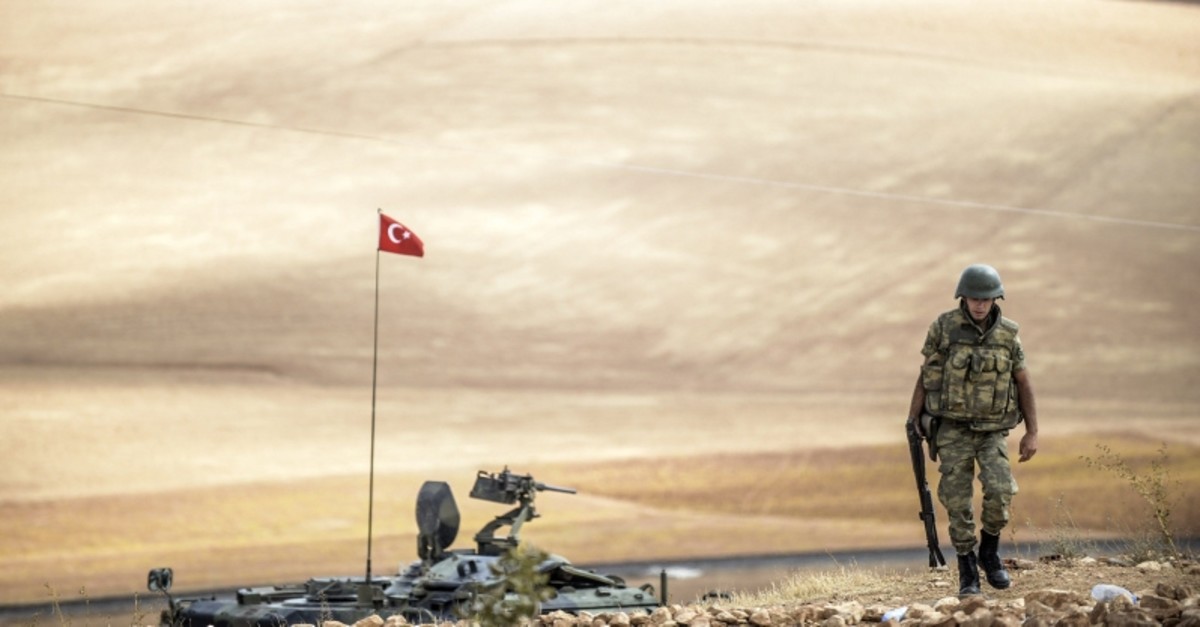 A Turkish soldier patrols near the Syrian border in the southeastern town of Suruu00e7, u015eanlu0131urfa province, Sept. 30, 2014. (AFP Photo)
by Daily Sabah Dec 10, 2019 6:54 pm
Turkey is ready to send troops to Libya to assist the country’s Tripoli-based Government of National Accord (GNA) if there is such a request, President Recep Tayyip Erdoğan said Tuesday.
“Regarding sending troops to Libya, if they request assistance, we would respond to that demand,” Erdoğan said during an event for World Human Rights Day in Ankara.
Pointing to the legitimacy of the GNA, Erdoğan reiterated that GNA head Fayez Al Sarraj is the internationally recognized leader of Libya, so it is only natural for Turkey to work with him.
“Actually, this was a process that started during the (Moammar) Gadhafi era. When he died, the process ended. Now, we have taken steps with Sarraj. (Khalifa) Haftar does not have international recognition. The one who has international recognition is Sarraj. That’s why we sit at the table with him, and we will continue our cooperation with him,” Erdoğan said, referring to the history of Turkish-Libyan ties.
On Nov. 27, Turkey and the GNA signed a bilateral memorandum after a meeting between Erdoğan and Sarraj in Istanbul. The deal enables Turkey to secure its rights in the Mediterranean while preventing any fait accompli maneuvers by other regional states.
The memorandum asserts Turkey's rights in the Eastern Mediterranean in the face of unilateral drilling attempts by the Greek Cypriot Administration, clarifying that the Turkish Republic of Northern Cyprus (TRNC) also has rights to resources in the area.
Meanwhile, a member of Libya’s High Council of State, Abdurrahman Shater, urged Sarraj to accept Turkey’s offer to send troops to Libya “to save the nation and lives of people,” Libya’s media outlets reported on Tuesday.
Libya has remained dogged by turmoil since 2011 when a NATO-backed uprising led to the ousting and death of former President Gadhafi after more than four decades in power.
Since then, Libya's stark political divisions have yielded two rival seats of power, one in Tobruk and another in Tripoli, as well as in-fighting by a host of heavily armed militia groups.
The military, pushed by Haftar's army, has allied with a parallel eastern administration based in Benghazi, marking a dangerous escalation in a power struggle that has dragged on since the vacuum following Gadhafi's death emerged. Haftar is not recognized by the international community, as the elected parliament of the country is centered in Tripoli.
According to Erdoğan, as long as it is beneficial for both sides, Turkey is ready to work with other regional countries, as well.
“As long as it is in accordance with the win-win principle, we are ready to take joint steps with all the Eastern Mediterranean countries. The only condition is for both sides to adopt stances that would allow everyone to come out as winners. If they want everything, it won't work,” Erdoğan expressed, underlining that all parties are entitled to their fair share.
Reiterating that Turkey did not have ships in the Eastern Mediterranean until recently, Erdoğan said the country has two now, both a drilling and a seismic survey, and efforts to buy a third are ongoing.
“We are taking steps to secure the rights of Turkey and the TRNC, and we will continue to do so. All these steps are compatible with international law,” the president underlined.
On Monday night, Erdoğan touched upon the issue, saying that Turkey followed international law in the Libya deal.
"Turkey used its rights originating from international law in the Libya deal; Greece, Israel, Egypt and the Greek Cypriot Administration cannot act without our approval," he said.
According to the U.N. Convention on the Law of the Sea, while a country's territorial waters extend 12 nautical miles out to sea, when it comes to the exclusive economic zone where it has the rights to fishing, mining and drilling, the area can be extended for an additional 200 miles.
However, if the maritime distance between the two countries is less than 424 miles, a bilateral deal is needed to determine a mutually agreed-upon dividing line for their respective exclusive economic zones.
Turkey has the longest shoreline in the Eastern Mediterranean, making it a natural candidate for seeking reserves in the region in accordance with international law.
The presence of the Turkish Cypriot government in Northern Cyprus also strengthens Turkey's hand. The country defends the rights of Turkish Cypriots in the region and insists that their consent is needed for any type of drilling activity.
Still, fellow regional actor Greece did not welcome the deal and even regarded it as a violation of its own rights, though international law deems otherwise. Athens even expelled its Libyan envoy Mohamed Younis AB Menfi from the country in response.
Greece's government also released a series of statements Tuesday claiming that the deal is “invalid” and was negotiated in “bad faith.”
Demanding “a framework on EU sanctions on Turkey and Libya over their accord,” the country said it “has lodged its objections to the United Nations” on the issue.
"The reason why Greece has gone berserk is that its hands are tied over the Turkey-Libya deal. The expulsion of the ambassador is an international scandal," Erdoğan highlighted, responding to Greece's reaction to the deal.
Last Update: Dec 20, 2019 2:18 am
RELATED TOPICS