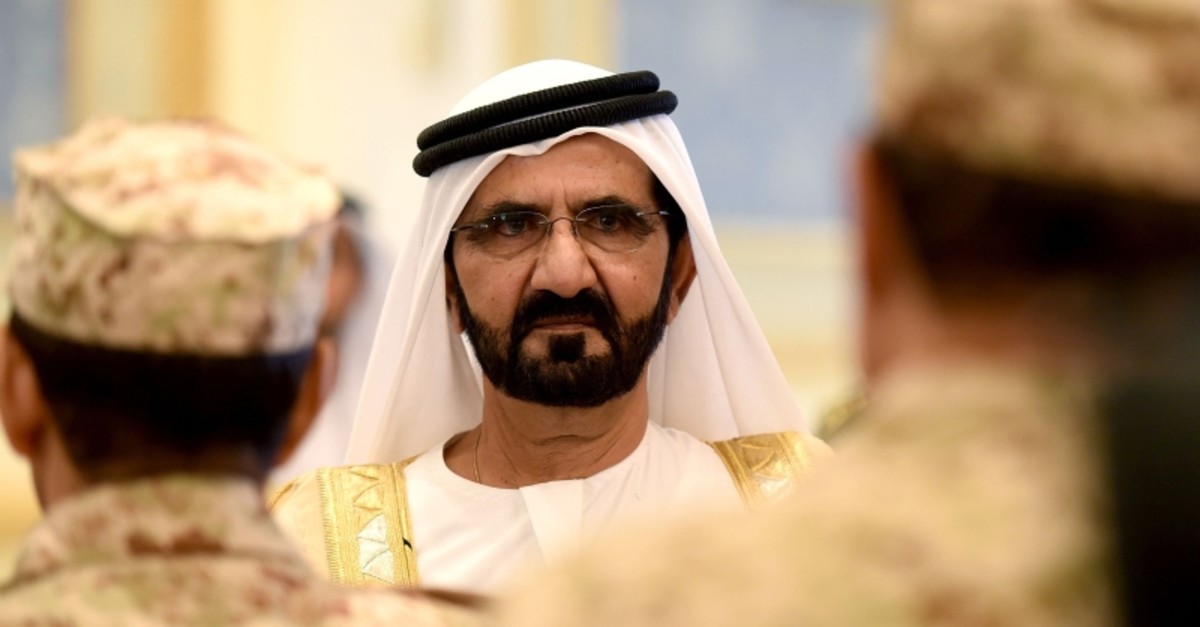 This file photo taken on May 05, 2015 shows Prime Minister of the United Arab Emirates (UAE) and ruler of Dubai, M. bin Rashid al-Maktoum, upon his arrival for a Gulf Cooperation Council (GCC) summit in Riyadh. (AFP Photo)
by Daily Sabah with AA Dec 16, 2019 11:06 pm

An email from Charles Johnson, a partner with the UAE-hired Akin Gump Strauss Hauer & Feld LLP lobbying group, that was sent the week after the House of Representatives passed its own sanctions legislation seeks to drum up support within the vital Senate Foreign Relations Committee for the chamber to follow suit.

"Andrew & Matt - I am reaching out on behalf of our client, the Embassy of the United Arab Emirates, to underscore the UAE's condemnation of Turkish aggression in Syria and support for sanctions measures against Turkey such as the House-passed 'Protect Against Conflict by Turkey Act,'" Johnson writes in the missive obtained through the Justice Department's Foreign Agents Registration Act (FARA) website.

"I hope this information is helpful as you continue to monitor developments in Syria, and as the Senate considers potential sanctions measures," he added in the correspondence dated Nov. 7.

The recipients are not clear, however, as their email addresses do not appear in the document. But the Senate Foreign Relations Committee's Chief Democratic Counsel is Andrew Keeler while the Republican's chief lawyer is Matthew Sullivan, according the Al-Monitor website, which first reported the lobbying effort.

Akin Gump Strauss Hauer is one of over a dozen lobbying firms the UAE has under contract, according to al-Monitor.

Neither the majority or minority on the Senate Foreign Relations Committee responded to emails and a telephone call from Anadolu Agency. The UAE's Washington embassy also did not reply to a request for comment.
UAE-Turkey relations have always been a bit distant, but the UAE has been blatantly stepping up its anti-Turkey efforts – and not only its war of words. From the Gezi events in 2013, which had been depicted as the "Turkish Spring," to the July 15, 2016 coup attempt by the Gülenist Terror Group (FETÖ), Turkish authorities have come across traces of Mohammed Dahlan's, adviser to MBZ, influence. The UAE has funded anti-President Recep Tayyip Erdoğan groups, including the outlawed PKK, according to reports. Turkish Foreign Minister Mevlüt Çavuşoğlu was referring to the UAE when he said after the failed coup attempt: "We know that a country gave $3 billion in financial support to the coup attempt in Turkey." In fact, some UAE-based media openly declared their support for the coup.

Turkey has also revealed a UAE spy network that has been operating all over the country. The proof, which was revealed through security forces investigating the case, demonstrated that the link with the network also had support from the CIA in their operations. The leader of the spies who were captured in April was identified by the National Intelligence Organization (MİT), revealing the details of the network. Disclosed only by his initials, H.E.R. was one of the key figures in the spy chain who was also determined to be the leader of two others who were detained.

The network was revealed through the arrest of two other UAE spies, Samir Semih Shaban and Zaki Y.M. Hasan, by the MİT in April this year. The pair allegedly came to Istanbul with the aim of detecting and gathering information on UAE adversaries after the controversial murder of journalist Jamal Khashoggi.
The Khashoggi murder is not the only case that the UAE grasped a hostile attitude against Turkey and tried to plot against the country. Shortly after the July 15 coup attempt carried out by the Gülenist Terror Group (FETÖ), David Hearst of the Middle East Eye claimed the owner of the Al-Ghad TV Channel, Dahlan, had transferred money to the terrorist group for the attempted coup.

According to a piece written by Hearst in the Middle East Eye on July 29, 2016, Dahlan allegedly transferred money to FETÖ putschists in the weeks before the coup attempt and even communicated with Fetullah Gülen through a person close to him. On the night of the coup attempt, UAE media reported that the Gülenists were in fact successful. The July 15 coup attempt was thwarted in the early hours of July 16 after Gülenist putschists fired on civilians, killing 249 innocent people, bombed Turkish Parliament, and raided the house where President Recep Tayyip Erdoğan was staying that night.

In 2017, President Erdoğan had said that Ankara knew which Gulf countries were happy with the coup attempt.

The president also stressed that Turkey has knowledge of how some countries have spent money in this regard.

In addition, some emails allegedly stolen from the inbox of Yousef Al-Otaiba, the UAE's ambassador to the U.S., revealed that the UAE might have been involved in the July 15 coup attempt.