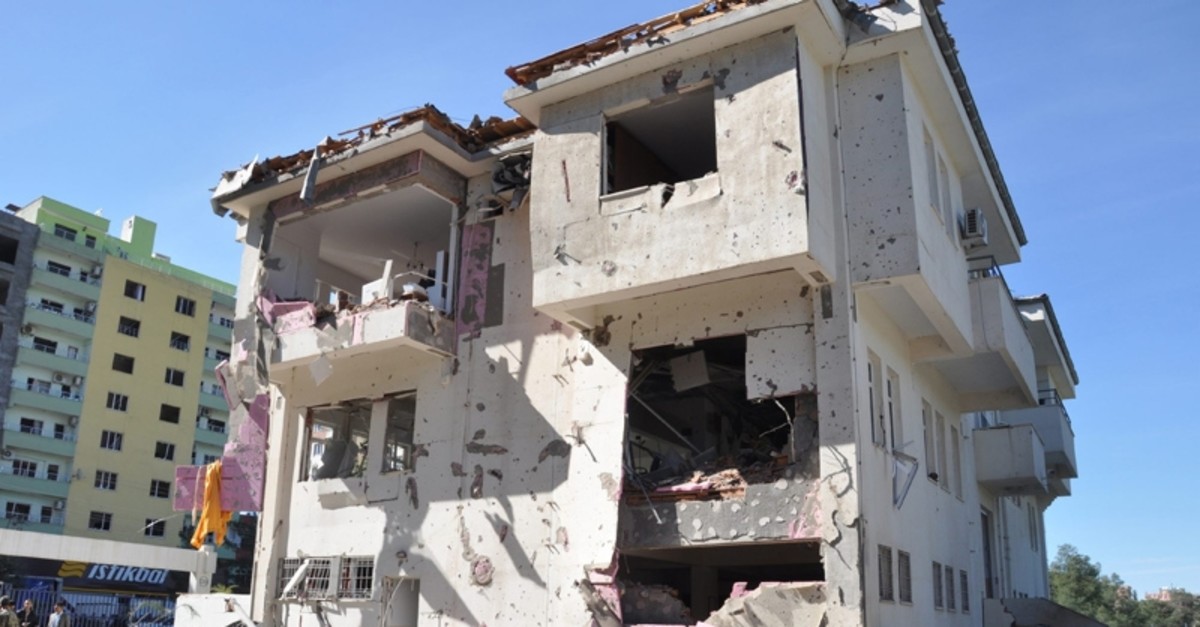 A building damaged in a car bombing by the PKK terror organization, in Ku0131zu0131ltepe, Mardin, April 2016. (Sabah File Photo)
by Daily Sabah with AA Dec 17, 2019 4:23 pm
Turkish citizens gathered Tuesday in memory of 15 off-duty soldiers killed in a suicide car bombing perpetrated by the PKK terrorist organization.
Fifty-four soldiers were also injured when PKK militant Kasım Yıldırımçakar set off his car bomb next to a bus carrying soldiers on weekend leave on Dec. 17, 2016. The soldiers, all conscripts, were members of a commando unit hailed for their counterterrorism operations.
Speaking to Anadolu Agency (AA), Yılmaz Üçkan, the local head of a martyrs foundation, said they organized various events to keep the memories of the murdered soldiers alive.
“The perpetrator of this attack was killed in Diyarbakır. We will hold everyone responsible for the killing of our soldiers to account,” Üçkan said. He also called on everyone to stand united against terrorism.
Two high-ranking PKK terrorists on the Interior Ministry's red list of wanted criminals were killed in Diyarbakır in late November.
The two terrorists, Hejar Çelik and İshak Özçaktu, were found to have ordered the terrorist attack against civilians on Ankara's Merasim Street and the Kayseri attack.
Another foundation director, Aydın Kalkan, said they will build a school in memory of the slain soldiers, adding that the fight against terrorism will continue.
“There is a decisive struggle against terrorism in Turkey and outside the country. I am sure our soldiers will be successful. The 40 years of terrorism will end,” Kalkan said.
The PKK is recognized as a terrorist organization by Turkey, the U.S. and the European Union and has waged a terror campaign against Turkey for more than 30 years, resulting in the deaths of nearly 40,000 people, including women, children and infants.
Last Update: Dec 20, 2019 2:28 am
RELATED TOPICS