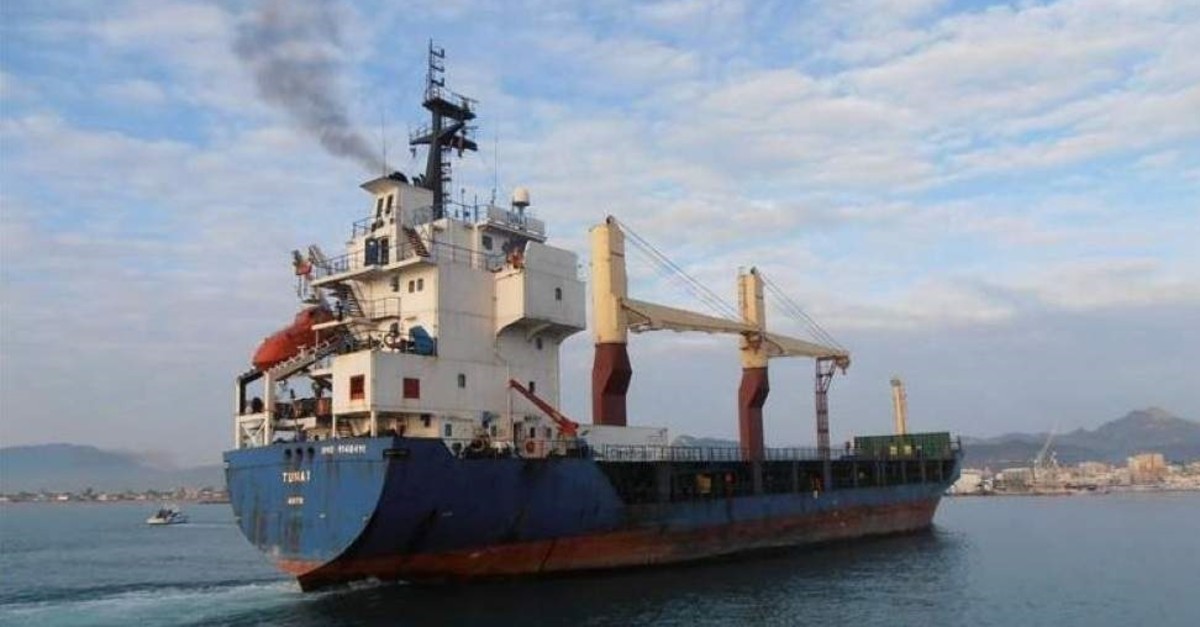 Undated photo shows the Turkish cargo ship Tuna-1, which was attacked off the coast of Libya's port city of Tobruk in 2015. (DHA Photo)
by Daily Sabah with Reuters Dec 22, 2019 1:04 am
Eastern Libyan forces seized a Grenada-flagged ship with a Turkish crew on Saturday off the Libyan coast, a spokesman said, amid rising tensions with Turkey, which supports the internationally-recognized Libyan government in Tripoli.
Turkey's Parliament on Saturday approved a security and military cooperation deal signed with the Tripoli government last month, an agreement that could pave the way for military help from Ankara.
A Libyan National Army forces naval combat vessel stopped the ship in Libyan territorial waters off the eastern city of Derna and towed it to Ras El Hilal port "for inspection and to verify its cargo," spokesman Ahmed Mismari told Reuters. He gave no further details.
The eastern forces loyal to commander Khalifa Haftar provided Reuters with a video that shows Libyan navy forces stopping the ship and questioning three crew members. They also published copies of passports of three Turkish nationals.
It was not immediately clear what the ship was carrying.
Turkey has been backing the Libyan Government of National Accord (GNA) led by Fayez al-Serraj as it fights off a monthslong offensive by Haftar's forces.
President Recep Tayyip Erdoğan has said Turkey could deploy troops to Libya in support of the GNA if a request is made.
Since the ousting and death of longtime dictator Moammar Gadhafi in 2011, two seats of power have emerged in Libya. Turkey and Qatar, as well as Italy, have been allied with Sarraj's government based in Tripoli, while Haftar, who commands forces based in eastern Libya, is backed by France, Russia and key Arab countries, including Egypt, the United Arab Emirates (UAE) and Saudi Arabia.
Last Update: Dec 22, 2019 3:01 pm
RELATED TOPICS