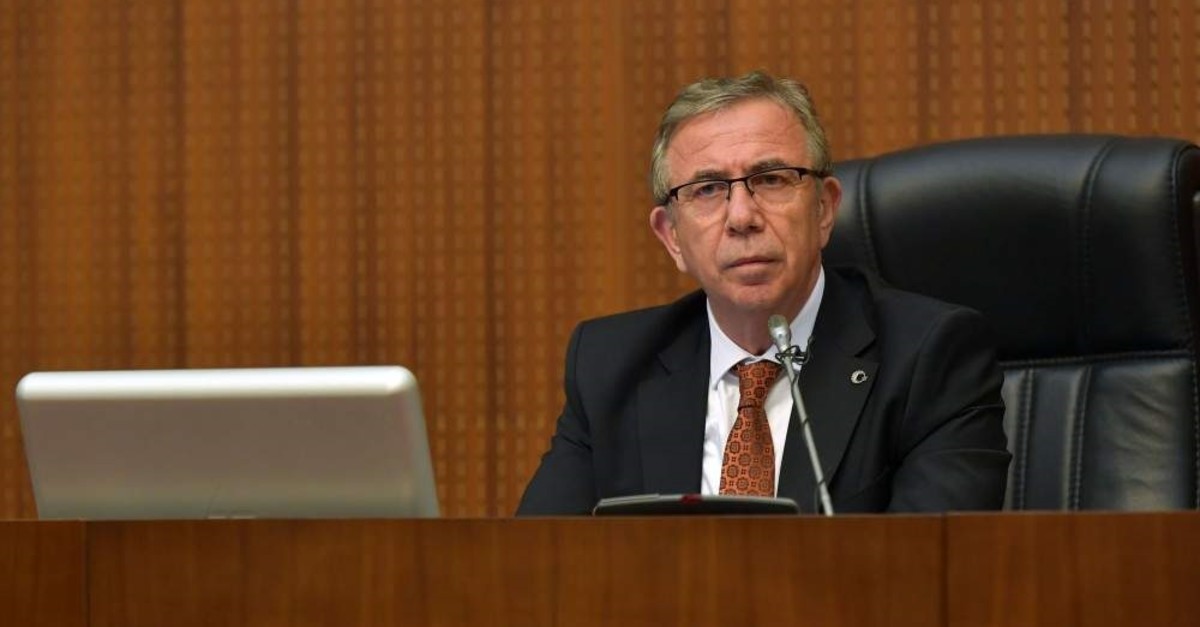 Aygün claims Yavaş is not fit to be mayor, urging him to investigate 79 cases regarding ongoing construction projects in the capital.

In a news conference on Monday, Aygün strongly denied Yavaş's claims that the former lawmaker and businessman was a member of the Gülenist Terror Group (FETÖ).

Aygün claims his construction project "Togo Towers," located on the Eskişehir Highway, was halted and sealed after he turned down the request of Yavaş-linked councilors who asked for a TL 25 million bribe to proceed with the project. He says Yavaş and his circle do not reject the claims and say they allegedly requested it to build a school.

The towers were constructed on a 12,082-square-meter plot of land. Aygün said he owned 2,722 square meters of the land and combined it with a plot of land belonging to a shoe factory. He claimed the land modifications were made in line with the Ministry of Environment and Urban Planning but there had been some issues that were later resolved at the municipal level. He strongly rejected claims that one of the partners of the project was a member of FETÖ, saying that he has suffered the most from the terrorist group.

He told reporters that he had recordings of officials asking for bribes, and has filed a criminal charge against Yavaş and the councilors.

Aygün noted that he received a call from the municipality and went there with his sister on Thursday.

"We entered the room and eight councilors asked us 'What will you give us?" Aygün said, adding that he criticized and warned the councilors about the controversial question asked inside the CHP group's room.

"I repeat ... the metropolitan municipality and Ankara will suffer because of this Mansur Yavaş guy," Aygün added.

The former CHP lawmaker noted that his construction project was paused but re-launched following a decision by an appeals court, and he told Yavaş to take the issue to another appeals court if his administration thought the project violated municipal laws and regulations.

"I filed a petition with Yavaş's personal secretary regarding this and told them that they would have to pay a large sum in compensation," Aygün said, adding that his construction project fully complied with all regulations.

On a different note, Aygün also said that he successfully underwent analysis by a financial crimes specialist, who carefully investigated all of his financial activities in the past 20 years.

"Yavaş says I gave money to FETÖ and fled abroad. This is my fourth decade in the job and never have I, in my entire business career, sent a single lira abroad. Nor have I bought any real estate," Aygün said, adding that Yavaş had invented the FETÖ claims in order to cover up his own corruption.

Without mentioning the mayor by name, Aygün urged authorities to investigate Yavaş' real estate and businesses in London, adding that he was the last person who could be a member of FETÖ.

"This man is supposed to govern Ankara. He is seriously a danger to the metropolitan municipality," Aygün said, adding that he regretted voting for Yavaş in the recent municipal elections.

Aygün also claimed fugitive FETÖ figures Hüseyin Saruhan and Rahmi Bıyık played a role in the nomination of Yavaş as CHP's candidate for Ankara mayor. Bıyık, who acted as the senior FETÖ figure responsible for the group's finances, is sought in the gray category of the wanted terrorists list, while Saruhan is in the orange category. Saruhan, who actively collected money from FETÖ supporters under the name of "himmet," fled the country in September 2015, while Bıyık fled in November 2015. Himmet is the word given for donations to Gülenist charities, which are accused of transferring money for the personal use of FETÖ cadres. Bıyık was also in close contact with Mustafa Özcan, codenamed "Iron Fist," who was the top FETÖ figure who directly received orders from FETÖ leader Fetullah Gülen.

The Interior Ministry's most wanted list is divided into five color-coded categories, with red marking the most wanted, followed by blue, green, orange and gray, depending on the sensitivity of the criminal activity.

Yavaş has filed a charge against Aygün for aiding, abetting and financing a terrorist organization.

The controversy between Aygün and Yavaş is not the first feud between CHP members in recent times. The CHP has been rocked by a number of incidents involving dissenting party figures, who have either resigned from the party or been fired by the administration.

Yavaş was previously criticized for failing to properly address forgery allegations lodged against him prior to the local elections. He was sued for attempting to collect a $600,000 check, which he received as a trustee. It has been said that if Yavaş were convicted, he would no longer be able to serve as mayor.

Yavaş was elected mayor of Ankara metropolitan municipality in the March 31 local elections in Turkey.