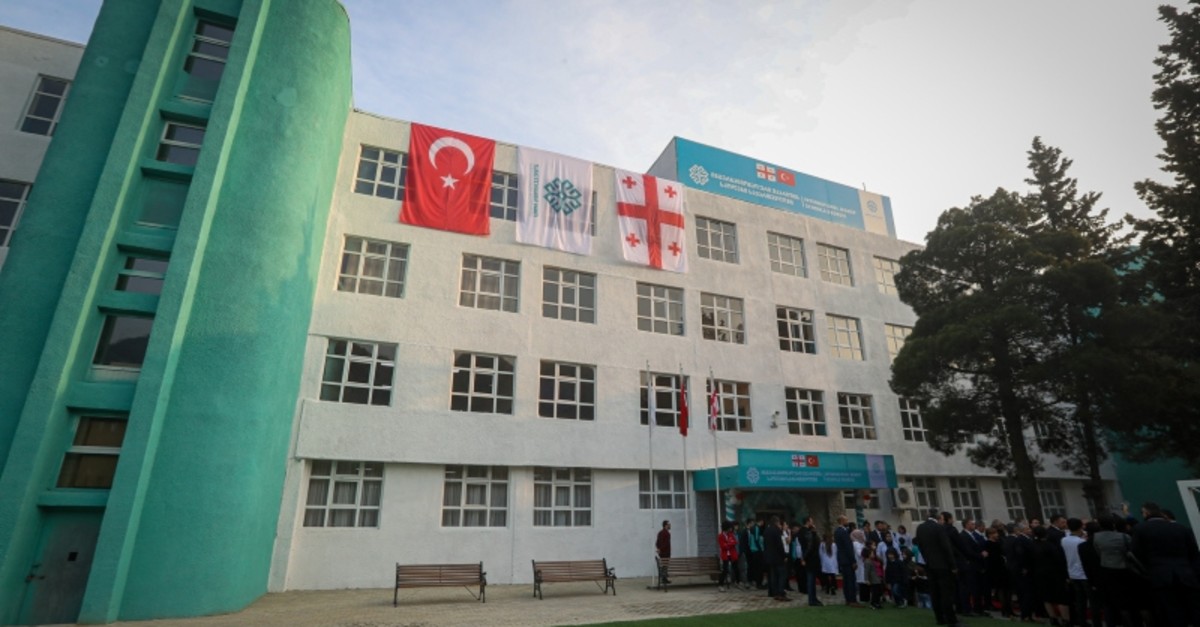 |AA Photo
by Daily Sabah with AA Dec 23, 2019 3:08 pm
Turkey’s Maarif Foundation is planning to open more schools in Georgia, Foreign Minister Mevlüt Çavuşoğlu announced Monday.
Çavuşoğlu attended the opening ceremony of the International Maarif Schools of Georgia in the capital Tbilisi, and said: “The Maarif Foundation will open new schools in Georgia, not only in Tbilisi but also in other cities.”
The minister said the schools provide education in Georgian, English and Russian.
The Turkish government set up the Turkish Maarif Foundation soon after the 2016 defeated coup orchestrated by the Gülenist Terror Group (FETÖ) with the aim of taking over the administration of schools linked to FETÖ.
The foundation has also established schools and educational centers in various continents, from Africa to Asia, over the last three years.
It provides educational opportunities to more than 30,000 students in 325 schools in 42 countries, offering different degrees. While the foundation has signed protocols with 40 countries and is soon planning to launch more educational projects, it also has 42 dormitories located in several countries.
FETÖ and its U.S.-based leader Fetullah Gülen orchestrated the defeated coup in Turkey, which left 251 people dead and nearly 2,200 injured.
FETÖ also has a considerable presence outside Turkey, including private schools that serve as a revenue stream for the terrorist group.
The terrorist group was also behind a long-running campaign to overthrow the state through the infiltration of Turkish institutions, particularly the military, police and the judiciary.
The Maarif Foundation not only facilitates educational activities in other countries. It also provides assistance to many high school students interested in pursuing higher education in Turkey after graduation.
“The Maarif Foundation will educate qualified students and contribute not only to the education of Georgia but also to its future and development,” Çavuşoğlu added.
Stressing that the Maarif Foundation operates schools in 42 countries, he said the quality of education is appreciated by parents and governors.
With the support of Turkey, the foundation will further improve the quality of education, Çavuşoğlu said.
Stronger trade ties
As part of his visit to Tbilisi, Çavuşoğlu met with Georgian Prime Minister Giorgi Gakharia to discuss stronger bilateral relations.
In a brief, closed-door meeting, Çavuşoğlu and Gakharia spoke about boosting bilateral trade relations as well as encouraging mutual investment.
Turkey also stressed its support to Georgia's territorial integrity and sovereignty.
Çavuşoğlu went to Tbilisi on Monday to attend the eighth Trilateral Meeting of Foreign Ministers of Turkey, Azerbaijan and Georgia.