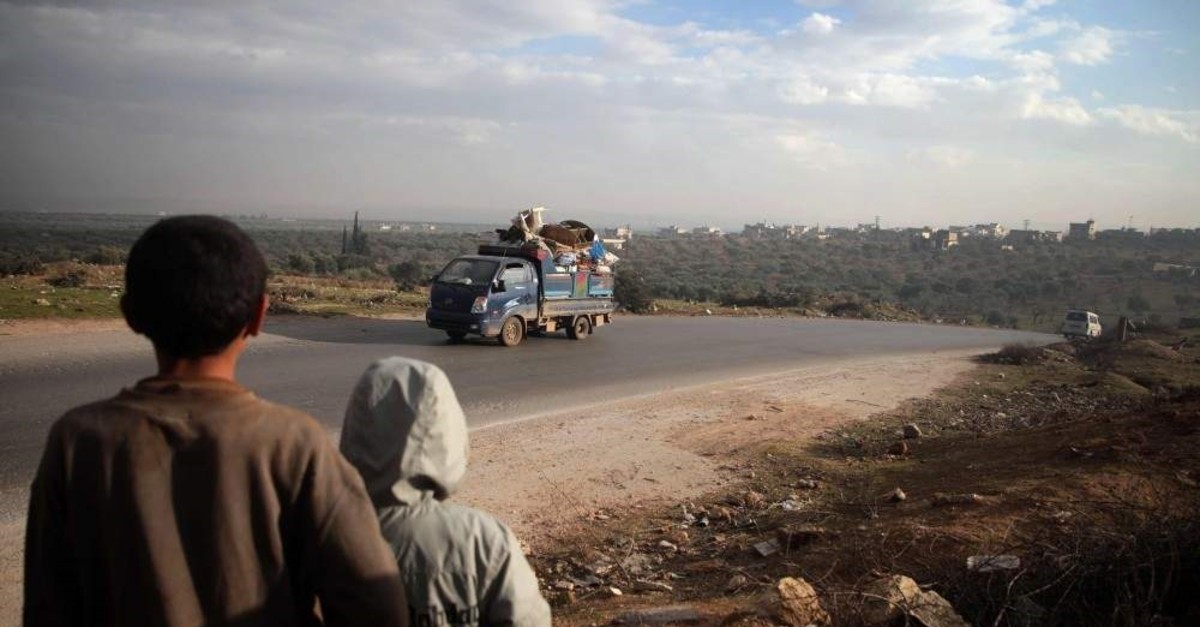 Boys look on at a truck loaded with furniture and belongings in the village of al-Mastumah, near Idlib, Syria, Dec. 24, 2019, amid Assad regime attacks in the area. (AFP Photo)
by Compiled from Wire Services Dec 24, 2019 8:01 pm

"We are closely following the process for an end to the attacks, and these attacks should come to an end immediately and implemented under a new ceasefire," Kalın told a televised news conference. "This is our main expectation from the Russian side."

The Idlib region has seen an uptick in violence in recent days as forces loyal to the regime of Bashar Assad, supported by Russian airstrikes, have launched a fresh assault to capture one of the largest urban centers in the area.

Assad's regime has repeatedly vowed to take back the area, and bombardment has continued despite a ceasefire.

Turkey and Russia agreed last September to turn Idlib into a de-escalation zone in which acts of aggression are expressly prohibited. Since then, more than 1,300 civilians have been killed in attacks by the regime and Russian forces in the de-escalation zone as the cease-fire continues to be violated. Over a million Syrians have moved near the Turkish border following intense attacks.

Turkey on Monday sent a delegation to Moscow led by Turkish Deputy Foreign Minister Sedat Önal for talks on the Idlib issue, after President Recep Tayyip Erdoğan said Ankara cannot handle a new refugee flow on its own.

Idlib hosts some three million people including many displaced by years of violence in other parts of Syria.

Kalın said Russian authorities told the Turkish delegation that Moscow would try to bring its influence to bear on Assad for a cessation of violence.

"We are now waiting for (Russia) to begin efforts in the coming 24 hours for an end to the regime attacks in Idlib."

Speaking about development in Libya, Kalın said Turkey may need to draft a bill to allow for troop deployment to the North African country and the Parliament is working on the issue.

"There might be a need for an authorisation in line with the developments over there. The parliament is conducting work on this issue," Kalın said.

"We will continue to support the internationally recognised Libyan government. This support may be in terms of military training, or other areas, such as political support," he added.

Turkey backs Libya's internationally recognized government and has said it could deploy troops there if it receives such a request. Libya's Tripoli-based government has been fighting off a months-long offensive by Khalifa Haftar's forces based in the east of the country. Haftar's Libyan National Army has received support from Russia, Egypt, Jordan and the United Arab Emirates.

Kalın stressed that Turkey would continue to provide the necessary support to Fayez al-Serraj's Tripoli-based government.

Ankara says Fayez al-Serraj's Government of National Accord (GNA) has not yet asked Turkey to deploy troops to Libya. However, Erdoğan said Sunday that Turkey would increase its military support to Libya if necessary and would evaluate ground, air and marine options.

Any energy project that excludes Turkey and violates its sovereign rights in the Eastern Mediterranean cannot be realized, Kalın added, touching upon the recent tensions in the region.

Referring to the protracted efforts of regional countries to deliver Eastern Mediterranean gas to Europe bypassing Turkey and the Turkish Cypriots, Kalın stressed that any such projects are impossible and Turkey will defend its rights in the region.

In order to solidify its exclusive economic zone (EEZ) in the Eastern Mediterranean, which has been violated by the Greek Cypriot administration, Turkey signed a maritime delimitation agreement with the U.N.-backed Government of National Accord of Libya on Nov. 27. Some of the regional actors, particularly Greece and Egypt, have criticized the agreement although Turkey has said any accusations saying the deal is illegal are wrong. "Our agreements with Libya pose a threat for third parties," Kalın stressed. The memorandum asserts Turkey's rights in the Eastern Mediterranean in the face of unilateral drilling attempts by the Greek Cypriot administration, clarifying that the Turkish Republic of Northern Cyprus (TRNC) also has rights to resources in the area. It went into effect on Dec. 8.

The leaders of the Greek Cypriot administration, Greece and Israel plan to sign an agreement on Jan. 2 to oversee the construction of an Eastern Mediterranean natural gas pipeline, the Greek prime minister's office announced Sunday. Speaking of the military security agreement Ankara and Tripoli inked, the presidential spokesperson also stressed that the Turkish Parliament is carrying out the necessary negotiations. Earlier Tuesday, public broadcaster TRT reported that the Parliament is preparing a bill to send Turkish soldiers to Libya and the bill will be discussed on Jan. 7.

In reference to the foreign involvement in the war-torn country which has been recently ramped up with the inclusion of Russian mercenaries, Kalın underscored that sending military aid and ammunition to the self-proclaimed Gen. Khalifa Haftar means sabotaging any peace negotiations in the country.