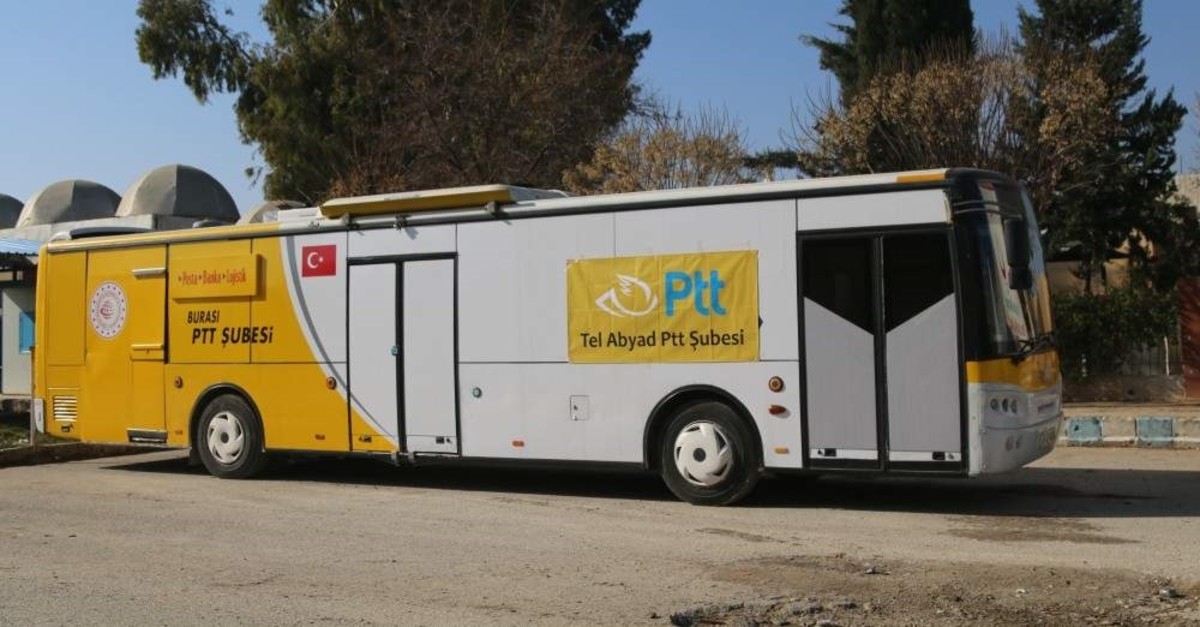 The mobile PTT branch opened for service in Syria's Tal Abyad after being liberated from terrorists. (AA Photo)
by Daily Sabah Dec 25, 2019 5:52 pm

A mobile branch of Turkey's state-run Post and Telegraph Organization (PTT) opened on Tuesday in Syria's northern Tal Abyad province, which was cleared of terrorists in Turkey's Operation Peace Spring and has since been under a normalization process with the help of Turkish institutions, military and humanitarian aid groups.

The mobile PTT was opened in coordination with the Şanlıurfa Governorate's Syria Support and Coordination Center (SUDKOM). Abdullah Erin, the governor of Şanlıurfa and his delegation attended the launch of the branch.

"Our workers in Tal Abyad will receive their payments through PTT branches. They will be able to make their money orders and payment processes at this branch," head of the Tal Abyad local council Vail Hamdo told Anadolu Agency.

It will be possible to carry out the process of opening an account, paying bills, depositing money, withdrawing cash, making a remittance and sending cargo.

Turkey's efforts to normalize the regions liberated from YPG and Daesh terrorists have enabled citizens to return to their everyday life with schools and hospitals reopened and roads built.

After launching three consecutive operations in northern Syria, Turkey rolled up its sleeves to reconstruct hospitals, schools, mosques and roads destroyed by the YPG. Within the scope of ameliorating the region's social infrastructure, people were given food and clothing aid by several nongovernmental organizations while roads and buildings were rebuilt.

Tal Abyad is populated to a great extent by Arabs and was occupied by the Daesh terrorist group in 2014. A year later, the YPG occupied the city with the support of the U.S. Tal Abyad was cleared of terrorists as part of Operation Peace Spring on Oct. 13. Since then, locals have gradually returned with humanitarian aid being provided with the help of the Turkish Armed Forces and the Turkish Red Crescent.

Turkey is a country that has gained appreciation around the world by virtue of its efforts to assist Syrians who were forced to leave their homes. Hosting more than 4 million Syrians and spending billions of dollars on their needs, despite the ongoing conflict, Turkey now looks to establish prosperous settlements and improve the living conditions for Syrians in Turkish-controlled areas.

Terrorist organizations also left the region littered with bombs and improvised explosive devices in civilian settlements such as in residential buildings, schools and under bridges and roads, the TSK has been working to detect these explosives and neutralizing them.

According to recent statements by the Interior Ministry, Turkey has facilitated the return of 368,217 Syrian refugees.

"Turkey spreads safety and peace wherever it goes. People from this soil return swiftly from Syria's depths and other places. Ras al-Ayn had been nearly a ghost town prior to the operation. The number of people returning to the district after the operation exceeds 50,000," he added, while also pointing out that together with SUDKOM and public institutions, they will continue to support civilians.

Furthermore, according to a written statement by the governorate, the first export to Tal Abyad in years was conducted through the reconstructed Akçakale customs gate. Muhammed El Ahmed, a merchant from Tal Abyad, has brought 250,000 tons of cement from Şanlıurfa in six trucks. It was determined that the value of the cement exports was $7,562.

Trade activities through the Akçakale customs gate had been stopped in 2012 and closed in 2014 due to security concerns when Tal Abyad was occupied by terrorist organizations.