Turkey to send troops to Libya, upon invitation, Erdoğan says 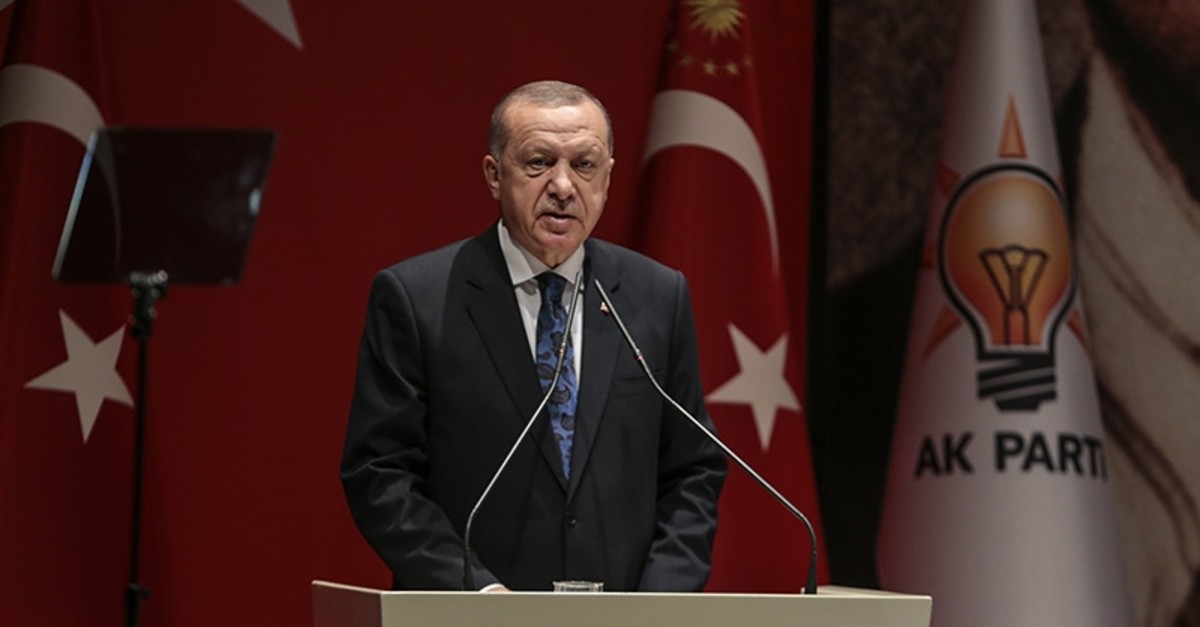 President Recep Tayyip Erdou011fan speaks at the meeting of provincial heads at headquarters of the ruling Justice and Development Party (AK Party) in Ankara on Thursday, Dec. 26, 2019 (AA Photo)
by Daily Sabah Dec 26, 2019 11:33 am

President Erdoğan announced that the military mandate to send troops to Libya will be submitted to the Parliament early January, criticizing countries supporting illegitimate Haftar forces in the war-torn country

Turkey will introduce a bill to send troops to Libya as soon as Parliament resumes, in response to the country's invitation, President Recep Tayyip Erdoğan announced on Thursday.
Speaking at a meeting of provincial heads at the headquarters of the ruling Justice and Development Party (AK Party) in the capital Ankara, Erdoğan said the military mandate to send troops to Libya will be on Parliament's agenda when it resumes early January.
He also criticized countries supporting the East Libya-based warlord Khalifa Haftar rather than Fayez al-Sarraj.
"They support a warlord but we support the legitimate government and accept their invitation to send troops. This is what makes us different," Erdoğan said.
The president reiterated Turkey's determination to provide the necessary assistance to the Tripoli administration, which he said is fighting against "putschist commander Haftar, supported by various European, Arab countries."
Libya's interior minister said Thursday Tripoli will ask Turkey for military support if the fight over the capital escalates.
Turkey's Parliament approved a security and military deal with Libya's U.N.-recognized Government of National Accord (GNA) Saturday. The deal went into effect yesterday after it was published in the Official Gazette.
The deal allows Turkey to provide military training and equipment at the request of the Libyan government, which controls the capital, Tripoli, and some of the country's west. Following the military cooperation deal, Erdoğan said Ankara might consider sending troops to Libya if the Tripoli government made such a request.
Turkey supports the U.N.-backed GNA government in Libya against the militia and mercenaries of self-proclaimed military leader Haftar. Tripoli-based GNA Prime Minister Fayez al-Sarraj sent letters to the leaders of the United States, Britain, Italy, Algeria and Turkey, urging them to "activate security cooperation deals."
The aim is to help the GNA "face aggression against the Libyan capital ... by any armed group operating outside the legitimacy of the state, to preserve social peace and achieve stability in Libya," he said.
Al-Sarraj also called for help to battle Daesh and al-Qaida, saying Haftar's offensive had given the terrorist groups "the appropriate opportunity and environment" for a resurgence in Libya.


Following the GNA's announcement over Turkey, the U.N. mission in Libya, UNSMIL, renewed its call for a political solution to the conflict.
Since the ousting and death of the longtime dictator, Muammar Gadhafi in 2011, two seats of power have emerged in Libya. Turkey, Qatar and Italy have been allied with Sarraj's government based in Tripoli, while Khalifa Haftar, who commands forces based in eastern Libya, is backed by France, Russia and key Arab countries, including Egypt, the United Arab Emirates (UAE) and Saudi Arabia.
On April 4, Hafter's forces launched an offensive to capture the capital Tripoli from the GNA. Haftar's April push made early gains but has since stalled at the edge of the capital in a bloody stalemate.
The fighting has escalated in the past week after Haftar declared a “final” and decisive battle for the capital.
According to the latest U.N. figures Friday, the fighting has left at least 284 civilians dead and 363 wounded since the April 4 start of the armed conflict that has forced more than 140,000 Libyans to flee their homes.
Erdoğan continued by saying that Turkey has historic and brotherly ties to the Mediterranean and North African regions and developments in those areas directly affect the country. He noted that Libya was particularly important to the Ottoman Empire and the founder of modern Turkey, Mustafa Kemal Atatürk.
"Gazi Mustafa Kemal mobilized our brothers and sisters in the Tripoli, Benghazi and Derna areas against the occupying forces and fought with them," Erdoğan said, adding that he sustained an injury to his eye during the clashes in Derna.
The president highlighted that the people of the region always loved one another and have close ties and the proximity of the countries allows them to enjoy multilateral relations.
"The steps we have taken [with Libya] fully comply with international law," Erdoğan said, adding that the only goal of the deal is to ensure that Turkey's rights in the Eastern Mediterranean are not violated.
On Nov. 27, Turkey and the GNA signed two bilateral memorandums after a meeting between Erdoğan and Sarraj in Istanbul.
The maritime deal enables Turkey to secure its rights in the Mediterranean while preventing any fait accompli maneuvers by other regional states.
The memorandum asserts Turkey's rights in the Eastern Mediterranean in the face of unilateral drilling attempts by the Greek Cypriot administration, clarifying that the Turkish Republic of Northern Cyprus (TRNC) also has rights to resources in the area.
Fellow regional actor, Greece, did not welcome the deal and even regarded it as a violation of its own rights, though international law deems otherwise. Athens later said it would expel its Libyan envoy Mohamed Younis AB Menfi from the country in response.
According to the U.N. Convention on the Law of the Sea, while a country can stretch its territorial waters only 12 nautical miles out to sea but when it comes to the exclusive economic zone, where it has the rights to fishing, mining and drilling, the area can extend for an additional 200 miles. However, if the maritime distance between the two countries is less than 424 miles, a bilateral deal is needed to determine a mutually agreed-upon dividing line for their respective exclusive economic zones.
Turkey has the longest shoreline in the Eastern Mediterranean, making it a natural candidate for seeking reserves in the region per international law. The presence of the Turkish Cypriot government in Northern Cyprus also strengthens Turkey's hand as the country defends the rights of Turkish Cypriots in the region and insists that their consent is needed for any type of drilling activities.
Erdoğan calls on Europe to take action on Idlib

Erdoğan also urged Europe to take action in the face of a humanitarian crisis in Syria's Idlib province.

"European countries need to shoulder the responsibility to ensure stability in Idlib and prevent another wave of mass migration," Erdoğan said, noting that Turkey has consistently told European and world powers that they will all have to pay the price if they do not take action and support efforts to ensure calm in the Idlib area.

The president noted that the Assad regime's persistent attacks prevent the perpetuity of the cease-fire in Idlib, forcing hundreds of thousands of civilians to head toward the Turkish border.

Presidential Spokesperson İbrahim Kalın said earlier this week that Ankara is talking to Moscow with the aim of reaching a new cease-fire after increased bombardment in Syria's northwestern Idlib province.

There has been an increase in violence in the area around Idlib, as Assad regime forces launched a fresh assault to capture the city center.

There are around 3 million people, including many who were displaced as a result of the yearslong conflict in other parts of Syria and sought refuge in Idlib.