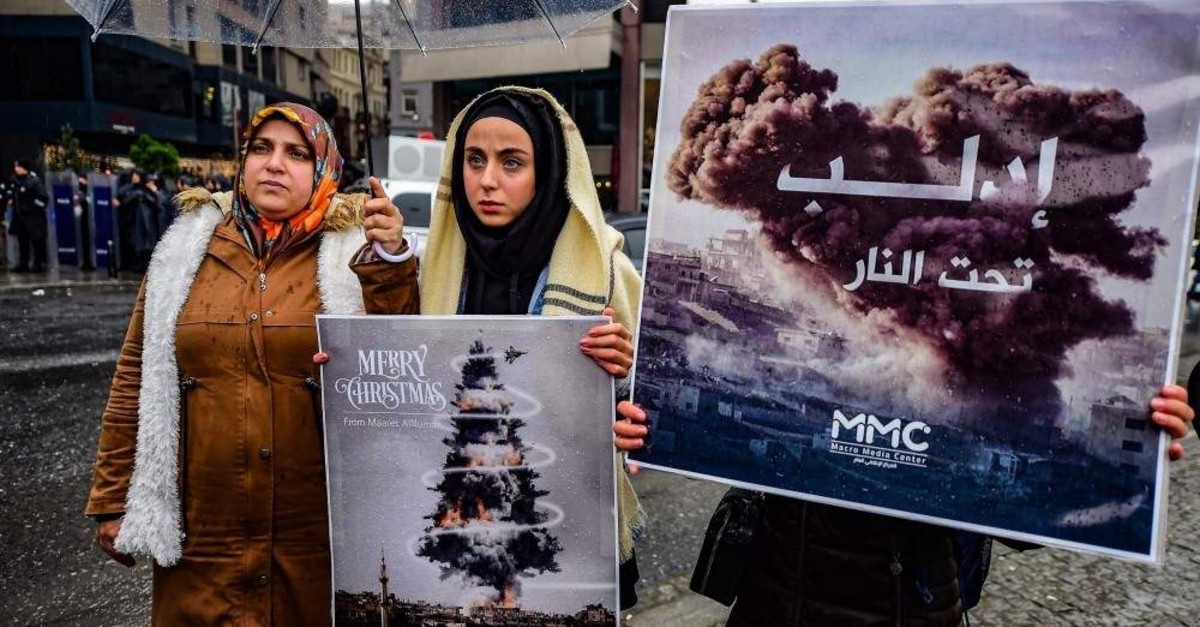 Several hundred Turkish and Syrian protesters held a demonstration in Istanbul Saturday against the intensified Russian and regime bombardment in what is supposed to be Syria's de-escalation zone of Idlib.

Some 300 protesters – mostly Syrians living in Turkey – gathered close to the Russian consulate in Istanbul, shouting "Murderer Putin, get out of Syria!" referring to the Russian President Vladimir Putin.

Since mid-December, regime forces and their Russian allies have heightened attacks on the southern edge of Syria, a de-escalation zone that Russia and Assad continually breach, eight years into the country's devastating war.

President Recep Tayyip Erdoğan and his Russian counterpart Vladimir Putin reached an agreement in Sochi on Sept. 17, 2018, which envisaged that the cease-fire in the Idlib region was to be preserved with the withdrawal of heavy arms and radicals from the region.

Despite the Sochi deal, the regime, backed by Moscow, intensified its attacks starting on April 26 under the pretext of fighting terrorists.

The latest violence has displaced more than 235,000 people and killed scores of civilians, despite an August ceasefire deal and international calls for de-escalation.

Protesters in Istanbul, including women with their children, held pictures of victims of the attacks, while some brandished a banner that read: "Russia is killing our people and children and the world is not doing anything."

"What does Russia want from us? Kids, wives are dying. People are dying," Syrian demonstrator Ahmed Marwan, 24, told AFP.

"We aren't terrorists, we are humans. We came to this country to live. Leaving your homeland isn't easy but we live in this pain. Enough already."

Turkey is home to around five million refugees, among which 3.7 million are Syrians.

"We are here to protest this massacre going on in Syria," Turkish protester Gülden Sönmez said.

"Here, I also want to make this call to Russia, and especially Bashar al-Assad... anyone who is responsible for this massacre, all of them have to be judged and pay for these war crimes in the name of humanity," she added.

Turkish police blocked the group from walking to the consulate in the busy Istiklal Street, but instead allowed a small group to unfurl a banner that read: "More than 30,000 children killed by Russia and Assad regime."

The Assad regime, which now controls 70% of Syria, has repeatedly vowed to take back the Idlib region, which hosts some three million people, including many displaced by years of violence in other parts of Syria.

Alarmed by a new wave of refugees near its border, Turkey this week sent a delegation to Moscow in a bid to press for a fresh ceasefire deal.

Erdoğan has already warned Europe that Turkey could not handle a new wave of Syrian refugees fleeing the increased bombardment in Idlib.