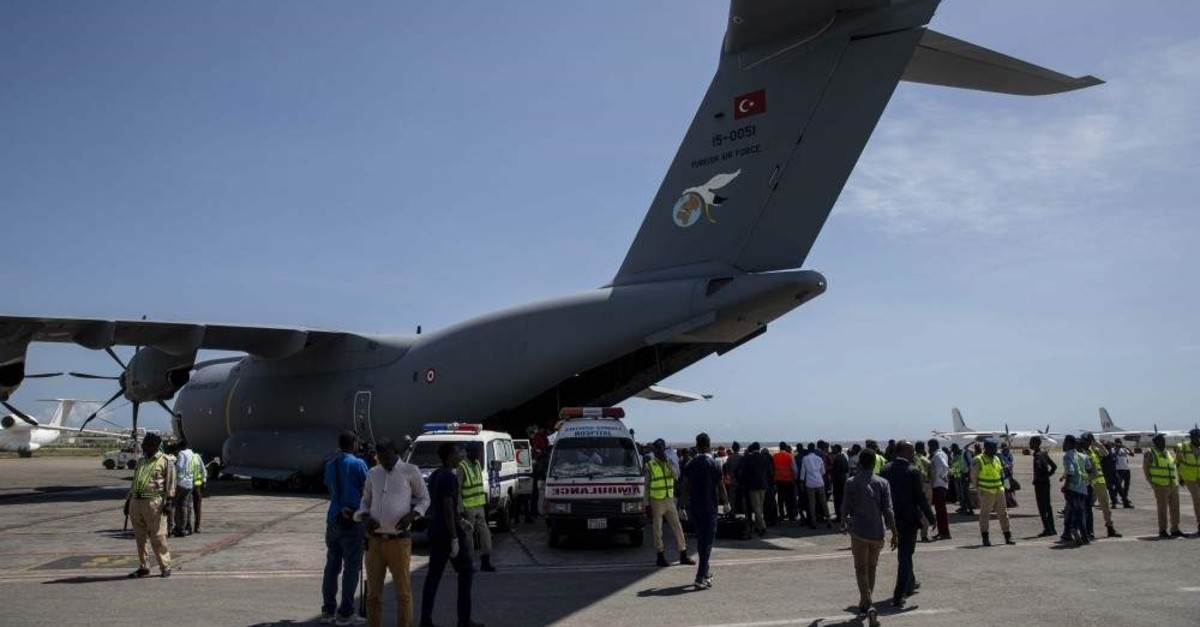 A Turkish military plane carrying victims of the brutal terrorist attack in Somalia arrived in Turkey to receive medical treatment, while authorities in Mogadishu continue to search for 25 people lost after the attack as other victims receive treatment at a hospital established by Turkey in the country.

The plane carrying 20 medical staff, including the national rescue team staff and surgeons, took off from Etimesgut Military Airport in the Turkish capital Ankara late Saturday and landed in Mogadishu early Sunday, Turkey's Defense Ministry said in a statement.

The same plane carried the bodies of deceased Turkish nationals Turan Sevi and Mehmet Kaplan and 15 people injured in the attack on its way back to the Etimesgut Military Airport in the capital Ankara.

The victims evacuated to Turkey were critically injured, while others injured in the attack are receiving treatment at the Recep Tayyip Erdoğan Hospital, which was established by Turkey in Mogadishu.

Abdukadir Moalim, whose relative was injured in the attack and was sent to Turkey by plane, told French Press Agency that his cousin had a critical head injury and the necessary medical treatment could not be made in Mogadishu so he was sent to Turkey.

The Somalian intelligence agency announced Monday that a foreign country was involved in the planning of the brutal attack, although it did not release evidence or specify the country.

"Let there be no doubt that #ExControlTerroristAttack was carried out by al-Shabab. We don't know what 'brotherly country' paid for it. To find that out, we need to ask ourselves what 'brotherly country' wished the Turkish engineers dead so that there is no more road construction," Minister of Planning and International Cooperation Adam Aw Hirsi said on his Twitter account.

The attack was one of the deadliest attacks in Mogadishu in recent memory, and witnesses said the force of the blast reminded them of the devastating 2017 bombing that killed hundreds.

Most of those killed were university students returning to class, Mayor Omar Mohamud Mohamed said at the scene.

Turkey's official humanitarian institutions, such as TİKA, the Turkish Red Crescent Kızılay and Diyanet Foundation along with civil initiatives such as the Humanitarian Relief Foundation (IHH) and Helping Hands, have implemented many development aid projects relating to infrastructure, education, health and related fields. For instance, TİKA financed projects in Mogadishu that included rehabilitating the Digfer Hospital, constructing 33 kilometers of roads and building the Somalian Statehouse.

Relations between Turkey and Somalia date back to the 16th century. At the time, the Ottoman Empire sought to prevent Somalia from becoming a Portuguese colony. In the wake of the 16th century, Somalia was ruled by local elements of the Ottoman Empire, following the empire's demise, by Western colonial powers. During this period, the Ottoman presence in Berbera, just like the presence of the military training center in Somalia today, was the guarantee of peace in the region.

Contemporary Turkish and Somalian relations began with the opening of embassies in 1979, although Turkey's embassy was closed in 1992 due to the civil war in Somalia. In the following years, Turkey was not indifferent to Somalia's internal problems and joined the United Nations Operation in Somalia with an army under the control of Gen. Çevik Bir. During the civil war, some Turkish civil initiatives also provided assistance through their local partners.

During the transitional government in Somalia, official bilateral relations remained limited. Following this period, then-Prime Minister Erdoğan and the late President Abdullahi Yusuf met on Jan. 29-30, 2012, at the African Union summit meeting in Addis Ababa. At this meeting, Prime Minister Erdoğan asked the Somali president to send a delegation to Ankara to present Somalia's needs.