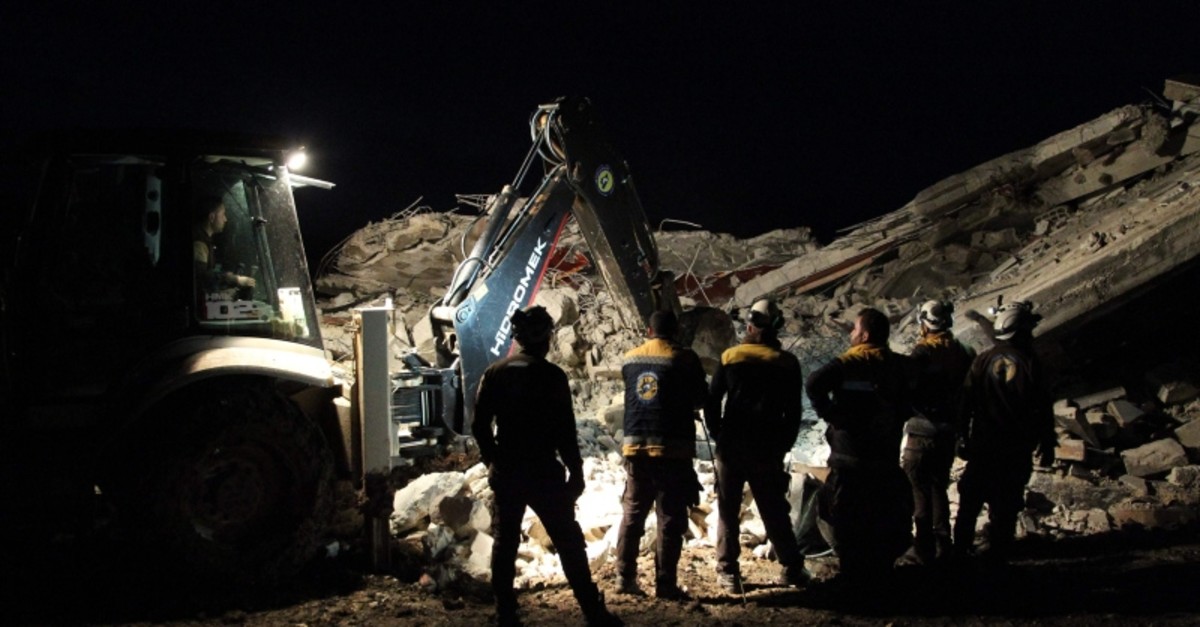 Members of the Syrian Civil Defence, also known as the White Helmets, search for survivors following an air-strike on the flashpoint town of Maaret al-Numan in Syria's southern Idlib governorate on December 30, 2019. (AFP Photo)
by Anadolu Agency Jan 01, 2020 1:05 pm
Many villages on the outskirts of Idlib in northwestern Syria have suffered from heavy bombardments carried out by the Bashar Assad regime and Russia on the first day of the new year.
According to opposition sources, Russian warplanes conducted more than 10 air raids on Idlib city center and Kafr Sajna village. Assad regime forces joined the attacks with rockets, mortars and artilleries.
Meanwhile, forces belonging to the Assad regime attacked a school in in Idlib’s Seraqib district on the first day of the new year, killing eight civilians, four of them children.
“On #NewYear2020 Day, regime forces commit a war crime against student children and teachers, after targeting a school in the town of #Sarmin to the east of #Idlib using internationally prohibited cluster bombs this morning,” the White Helmets Civil Defense Group wrote on Twitter on Wednesday.
The attack reportedly wounded 20 people, with the death toll likely to rise.
No information has yet been given on the number of casualties.
While attacks on civilians continue, locals in the war-torn city are looking for ways to protect themselves, with at least 49 families having taken refuge in one of the city's mosques.
Turkish Red Crescent is supplying food and blankets to the displaced as the severe winter conditions add to the suffering.
Speaking to Anadolu Agency, Abdullah Sharaf al-Din, who is among those sheltering in the mosque, said they had had to leave their homes to escape aerial bombardments from Russia and the Syrian regime.
He said he took refuge in the mosque with his wife and his six children nine days ago, adding they had been struggling to survive amid the harsh winter. Sharaf al-Din's wife said her children are sick due to the cold weather, adding that she hoped the war would draw to a close soon so they could return home.
Fatima Ahmadi said she had taken refuge in the mosque two days earlier with her children to escape the severe bombardments of her home city, Maarat Al-Numan.
She pointed out that living conditions were very poor and that she could not find a place other than the mosque to protect her children.
Ahmadi thanked all the organizations and bodies supporting them, especially amid the freezing weather.
Since November, a wave of attacks by the Syrian regime and its supporters has resulted in the displacement of more than 264,000 civilians from Idlib to areas near the Turkish border, according to field reports.
Last Update: Jan 01, 2020 4:25 pm
RELATED TOPICS