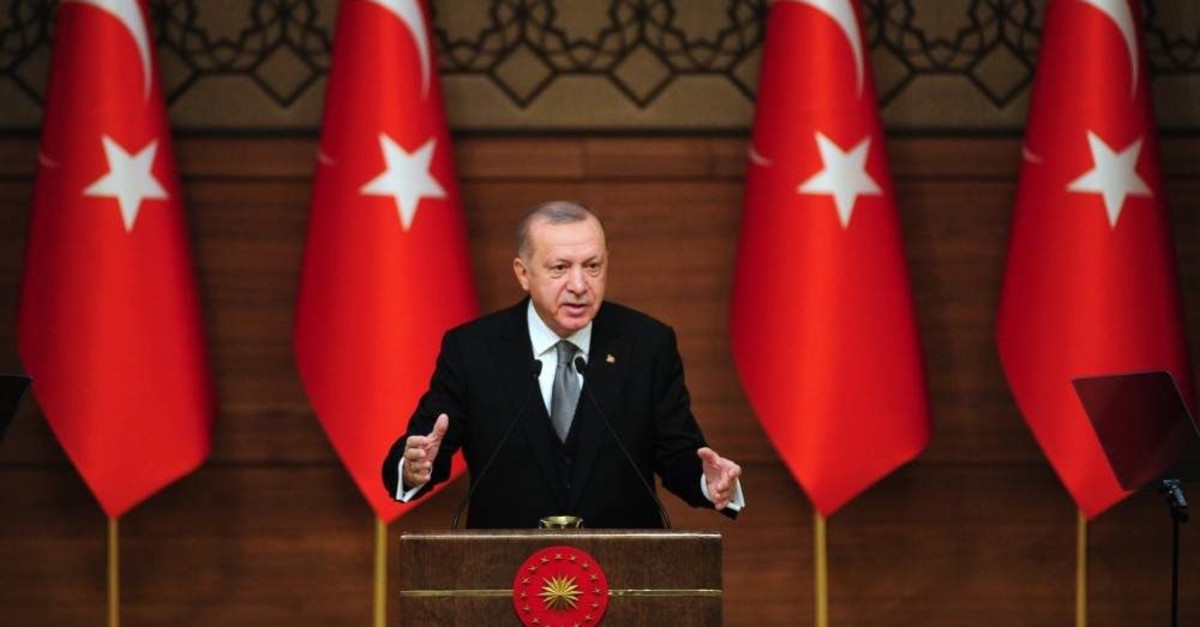 As many as 250,000 migrants fleeing from the northwestern Syrian province of Idlib are headed toward Turkey, President Recep Tayyip Erdoğan said Thursday as Ankara tries to prevent them from crossing the border.

"Right now, 200,000 to 250,000 migrants are moving toward our borders. We are trying to prevent them with some measures, but it's not easy. It's difficult; they are humans too," Erdoğan said Thursday at an urban security symposium at the Beştepe Presidential Complex in Ankara.

Erdoğan criticized Western powers for failing to take action on the Syrian crisis while refusing to accept refugees. He noted that Turkey has embraced the migrants but the West is still hesitating to open its doors because it does not want foreigners in its cities. 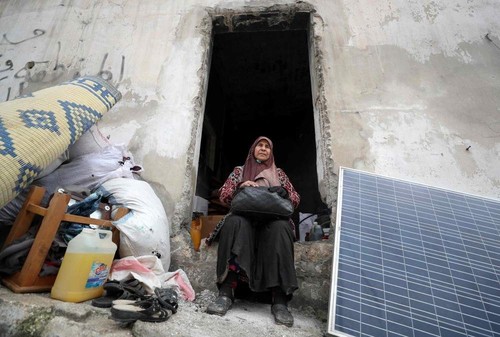 A Syrian woman displaced from Maar Shamshah town waits as her belongings are unloaded at a makeshift camp in Idlib, northwestern Syria, Dec. 31, 2019 (AFP Photo)

He continued by saying that unlike European countries, Turkey will not put up a barbwired fence around the border to prevent the flow of migrants, but Ankara wants to take a more humanitarian approach to deal with the issue.

Turkey has frequently warned the international community of the imminence of a humanitarian disaster and fresh wave of refugees unless actions are taken and the Syrian regime is restrained. Yet, no worthwhile actions have taken place, as airstrikes and artillery continue to target thousands of civilians.

Ankara has also proposed the establishment of a safe zone in northern Syria clear from all terrorist elements in order to allow for the resettlement of Syrians who have fled to Turkey from war-torn areas. Turkey's safe zone plan aims to host millions of Syrians in a safe and stable environment.

Turkey and Greece have been key transit points for irregular migrants aiming to cross into Europe to start new lives, especially those fleeing war and persecution. To reduce the number of illegal migrants on the dangerous Aegean Sea route and to find a solution to the influx of refugees heading to the union, Turkey and the European Union signed an agreement in March 2016. The deal stipulates that Greece is to send migrants held on its Aegean islands back to Turkey. In return, Turkey is to send Syrian migrants it hosts to various European Union countries.

According to the deal, Turkey was also promised 6 billion euros ($6.6 billion) in financial aid, which was initially planned to be given to the country in two installments to be used by the Turkish government to finance projects for Syrian refugees. Visa freedom for Turkish citizens traveling to the EU was also promised under the agreement.

Despite significant developments in the control of migration traffic, the EU has not delivered on its commitments. Similarly, although the first installment of the funding pledged has been provided to Turkey, the EU has yet to fulfill other articles, such as visa-free travel for Turkish citizens and an update of the customs union.

Turkey hosts the largest number of refugees and spends the most on humanitarian aid per capita compared to other countries. According to Interior Ministry figures, the number of refugees was 4.2 million in 2017 and has now reached 4.9 million. While 3.7 million Syrians are living in Turkey, more than 415,000 Syrian children have been born in Turkey since the start of the civil war in 2011. Furthermore, Ankara has spent $40 billion for the refugees so far, according to official figures.