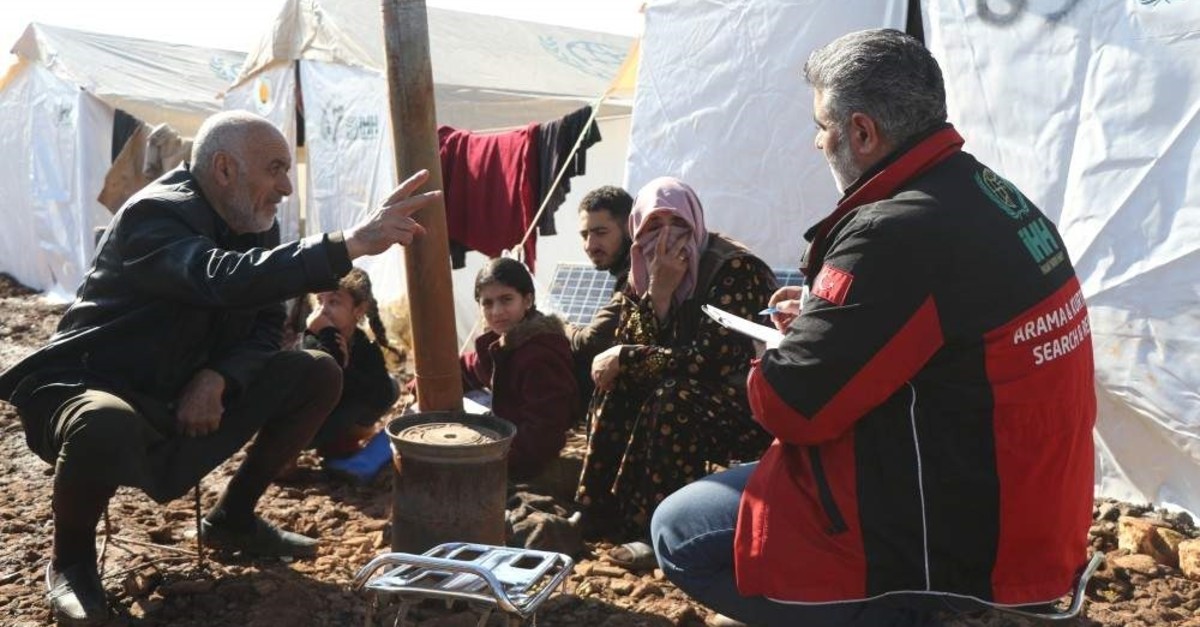 Officials from the Humanitarian Relief Foundation (?HH) conducted health checks for displaced Syrians who fled from the regime attacks on Idlib to refugee camps in northern areas near the Turkish border, Jan. 2, 2020. AA
by Daily Sabah with Agencies Jan 02, 2020 12:30 pm

In severe winter weather conditions, the Syrian families who have been forced to displace due to the attacks carried out by the Assad regime and Russia, try to live under harsh winter conditions in Idlib.

Refugees have difficulty in finding a living place due to the lack of campsites, infrastructure and the excessive amount of refugees in the camps, although the Turkish Red Crescent is supplying food and blankets to the displaced.

On Thursday, thousands of civilians who left their homes due to regime attacks and migrated toward northern areas near the Turkish border had health checks by Turkish officials.

Selim Tosun, İHH's media officer for Syria Operations, said that they conducted health checks for providing health assistance to civilians who need it because of long migration trips.

Tosun stated that they will continue their efforts of health assistance for displaced civilians.

In the latest round of violence in Syria's nearly nine-year-old war, regime forces have upped their deadly bombardment of the northwestern opposition bastion of Idlib in recent weeks.

In December alone, the violence pushed some 284,000 from their homes in the opposition-run region of some 3 million people, the United Nations said.

Rescue services and witnesses say the bombing campaign that has killed several thousand civilians has left many towns in ruins and knocked out dozens of medical centers.

Regime ally Russia announced a cease-fire for Idlib in late August after months of deadly Russian and regime bombardment that killed around 1,000 civilians.

But sporadic clashes and bombardment persisted throughout the autumn before a spike in violence in the past month, the Observatory has said.

The attack in Idlib province, the last opposition stronghold Syria, was part of an ongoing offensive in which Syrian troops have captured more than 40 villages and hamlets over the past two weeks.

Idlib is dominated by opposition groups and is also home to 3 million civilians. The United Nations has warned of the growing risk of a humanitarian catastrophe in the region, which lies along the Turkish border.

U.S. President Donald Trump spoke out last week against the "carnage" in Idlib. Moscow and Damascus deny claims of indiscriminate bombing of civilians, saying say they are fighting terrorist groups.

Speaking at the City and Security Symposium in the capital Ankara, President Recep Tayyip Erdoğan reiterated Thursday that nearly 250,000 refugees are moving toward the Turkish border to save their lives by escaping from the regime attacks in Idlib.

Underlining that Turkey is trying to prevent a new refugee influx with certain measures, Erdoğan said a country is safe as long as it treats its own citizens and those seeking refuge with a humane attitude.

“While Turkey hosts more than 5 million people, including almost 4 million Syrians, spread across its 81 provinces, those who do not want foreigners in their own cities cannot be sincere in their humanitarian sensitivities,” he added.

Erdoğan also criticized the Arab League for its indifference to the refugee crisis and decisions taken against Turkey.
He continued by saying that unlike European countries, Turkey will not put up a wired fence around the border to prevent the flow of migrants, but wants to take a more humanitarian approach to deal with the issue.
Turkey has frequently warned the international community of the immanence of a humanitarian disaster and fresh wave of refugees unless actions are taken and the Syrian regime is restrained. Yet, no worthwhile actions have taken place, as airstrikes and artillery continue to target thousands of civilians.
Ankara has also proposed the establishment of a safe zone in northern Syria cleared from all terrorist elements in order to allow for the resettlement of Syrians who have fled to Turkey from war-torn areas. Turkey’s safe zone plan aims to host millions of Syrians in a safe and stable environment.
Turkey hosts the largest number of refugees and is the country that spends the most on humanitarian aid per capita. According to Interior Ministry figures, the number of refugees was 4.2 million in 2017 and has now reached 4.9 million. While 3.7 million Syrians are living in Turkey, more than 415,000 Syrian children have been born in Turkey since the start of the civil war in 2011. Furthermore, Ankara has spent $40 billion for the refugees so far, according to official figures.

Meanwhile, at least nine civilians, including five children, were killed when the Syrian regime forces launched missiles that struck a school used as a shelter for displaced families in the country's northwest, a war monitor said Wednesday.

The school building was being used by displaced families fleeing a Russian-backed regime bombing campaign in Idlib, the last opposition bastion in the northwest, the Britain-based Syrian Observatory for Human Rights reported.

Five children were among those killed in the strike on a disused school in the town of Sarmin in Idlib province.

At least 20 others were also injured in the latest attack in Saraqib province in Idlib’s de-escalation zone, the White Helmets civil defense agency said.

An AFP correspondent in Sarmin saw the remains of a missile several meters long in a nearby olive grove.

Sarmin is among the towns and villages that have been pounded relentlessly by Russian jets and Syrian artillery since a renewed regime assault last month, despite a deal agreed on last September by leaders of Turkey, Russia and Iran to ease tensions.

Since Moscow and Ankara reached a deal in September 2018 under which acts of aggression are supposed to be prohibited in Idlib, over 1,300 civilians have been killed in the de-escalation zone.

The Russian-led campaign that started in April 2019 had already forced at least a million people to leave for relatively safer areas closer to the border with Turkey, which Russian jets rarely hit.

Syria's civil war has killed more than 370,000 people since it started in 2011 with the brutal repression of anti-government protests.

In total 11,215 people including more than 1,000 children were killed during the war last year, although it was the least deadly year on record since the beginning of the conflict.