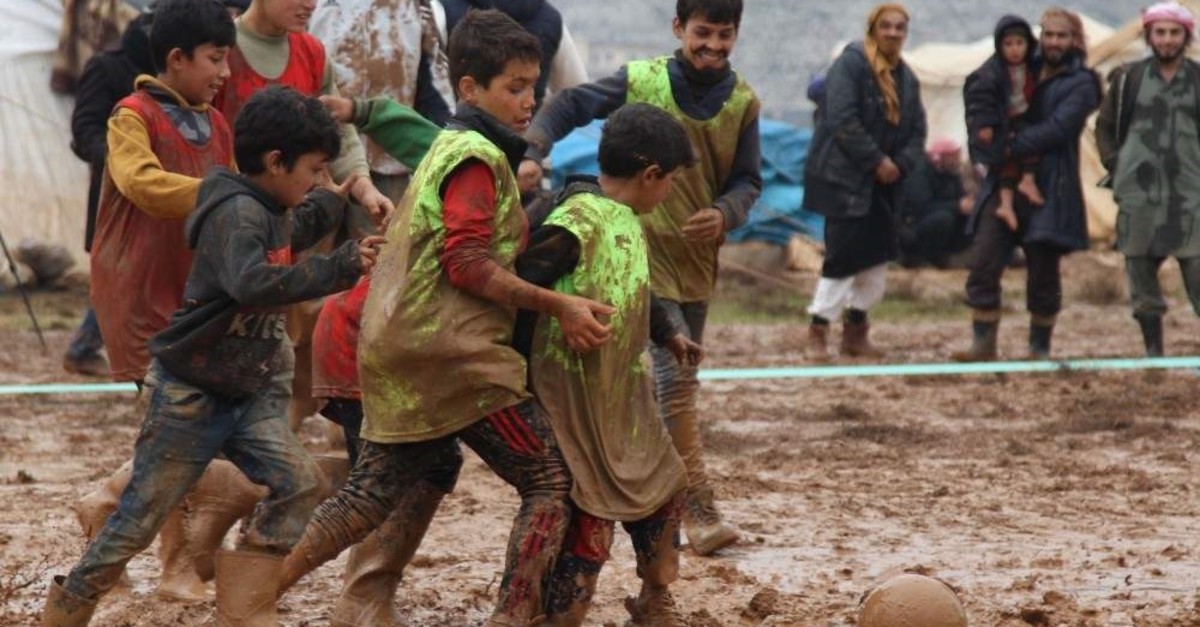 Syrians play a game of football organized by local activists in a muddy field in a camp for the internally displaced west of the town of Sarmada in Syria's northwestern Idlib province, Jan. 2, 2020. - The latest round of violence in Syria's nearly nine-year war saw regime forces upping their deadly bombardment of the northwestern province of Idlib, forcing in December alone, according to the United Nations, some 284,000 from their homes in the jihadist-run region of some 3 million people. (Photo by Abdulaziz KETAZ / AFP)
by Daily Sabah with AA Jan 03, 2020 6:13 pm

A football match organized in Idlib by Syrian activists aimed to draw attention to the displaced's struggle in the conflicted province made worse by winter conditions. The event, offering interesting scenes thanks to enduring mud and rain, made participating Syrian children smile.

Under the scope of the "Let's Live Some Memories" project, Syrian activists came together near the Turkish-Syrian border and organized the event with an aim to attract attention to the plight of displaced Syrian civilians and their struggle to survive.

According to an activist who participated in the match, Yusuf Şaban, the ongoing heavy rain and mud were far from a nuisance since they are used to the harsh conditions of the nine-year-long civil war.

"Every day, when I was visiting the camps, I would see tears in the children's eyes, who were constantly falling due to the mud and getting wet in the rain. Now, we have tried to put a smile on the children's faces with this match. We are covered in mud, but we are happy," Şaban said, speaking to Anadolu Agency (AA).

Another activist, Bessam Hammede, said they organized the match to prove that even under harsh conditions, they have the power to survive.