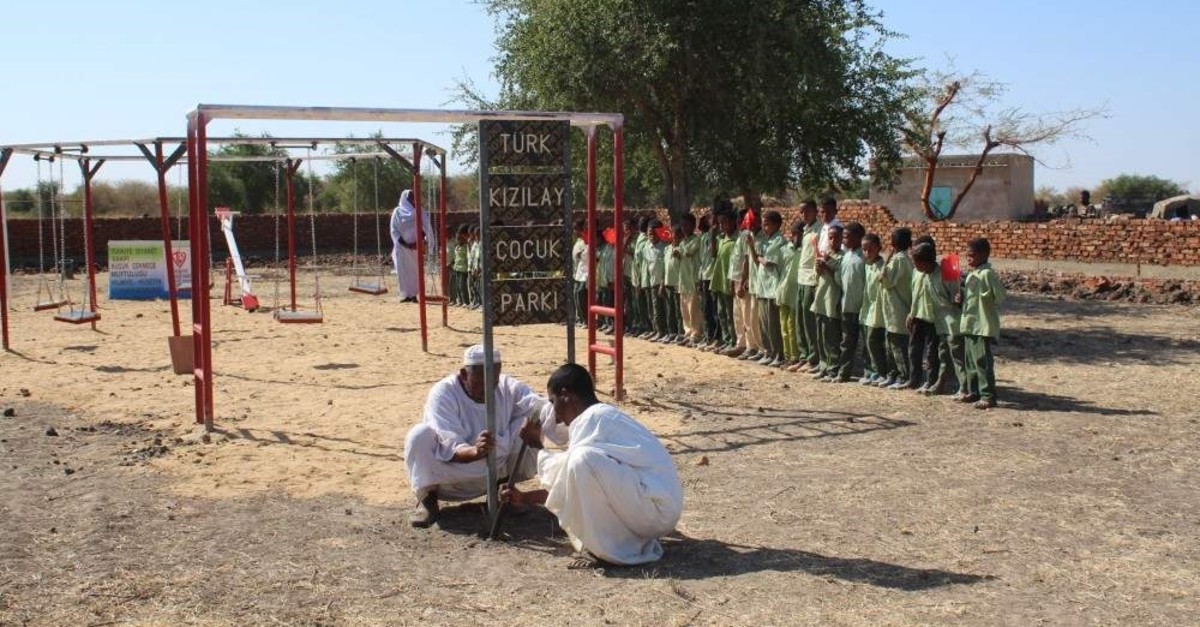 by Daily Sabah with AA Jan 05, 2020 6:03 pm
Four playgrounds have been built in Sudan's flood-hit regions by several Turkish nongovernmental organizations (NGOs) in coordination with the Turkish Cooperation and Coordination Agency (TİKA).

Thanks to support provided by the Turkish Red Crescent (Kızılay) and the Turkish Diyanet Foundation, four playgrounds have been built at the Khartoum Vocational Training Center, an affiliate of TİKA. Two of the playgrounds were placed in areas worst hit by the flooding – one in Bahri and one in the Ad-Damazin province of the Blue Nile region, the latter representing the first and only playground in region – bringing smiles to the face of local residents.

Head of the Turkish Red crescent's Sudan delegation Serdar Yılmaz stated that the building of permanent housing for victims of the flood continues, with three of the 100 houses built having been given to their new owners.

Heavy rains and floods have swept Sudan for months since June of last year, creating a disaster for thousands of people. According to the U.N. Office for the Coordination of Humanitarian Affairs (OCHA), 245,700 people have been affected by floods in Sudan, while more than 32,800 homes have been destroyed and another 16,200 damaged.

Following the disaster, Turkish non profit organizations have come to the aid of those worst affected, providing tons of food and provisions, as well as tents.

The White Nile state to the country's south has suffered most from the floods, with more than 66,000 people affected and more than 13,000 houses destroyed or damaged, according to OCHA. Crucial infrastructure, such as water access points, schools and latrines, has been damaged and roads have become impassable, cutting off entire villages and communities, the organization said. Loss of livestock may aggravate already rising food insecurity, OCHA added. An estimated 5.8 million people are severely food-insecure in Sudan, according to the U.N. – 2 million more than the previous year.
RELATED TOPICS