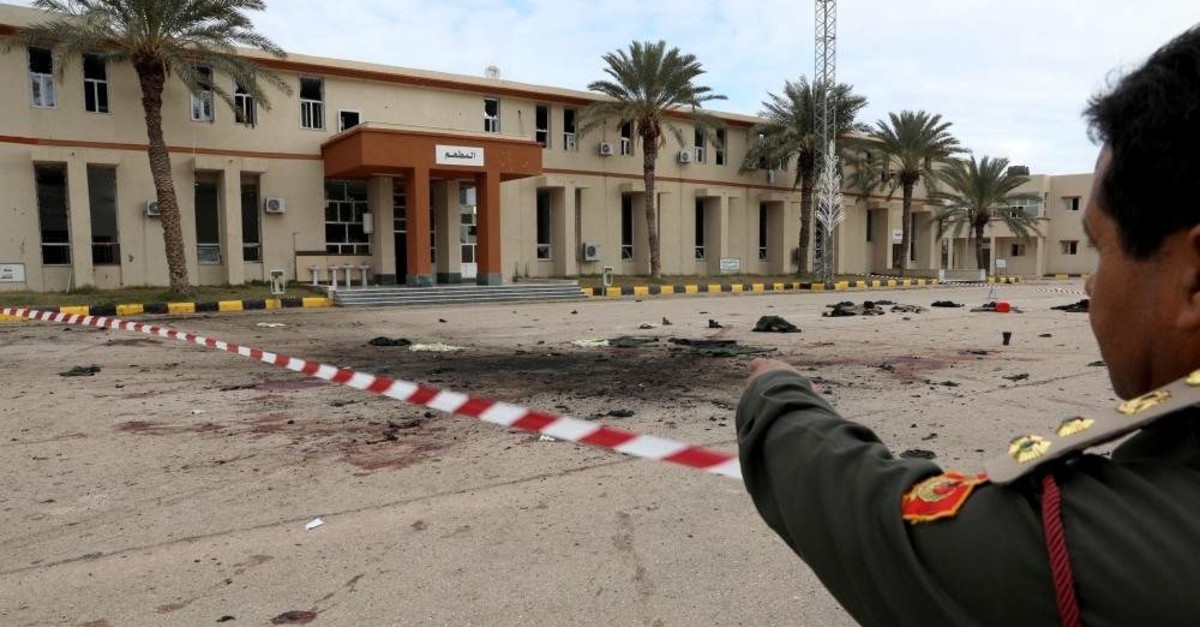 A member of security forcers of the Government of National Accord (GNA) gestures as he inspects the site of an attack on a military academy in Tripoli, Libya Jan. 5, 2020. (REUTERS)
by Anadolu Agency Jan 07, 2020 4:37 pm
A multinational force has attacked Libya's coastal city of Sirte, the U.N.-recognized government said Tuesday.

In a statement, Taha Hadid, a spokesman for Sirte protection force of the Government of National Accord (GNA), described the withdrawal of government forces from the city as "tactical."

"Sleeper cells attacked our forces, which found themselves before the option of turning the situation into warfare inside residential neighborhoods," Hadid said.

"Our operations' room looked into the situation and estimated that this would put 120,000 residents at the risk of death and displacement," he added.

"After analyzing the situation, we have taken the decision to pull out of the city and wait for orders," the spokesman further indicated.

On Monday, forces aligned with Khalifa Haftar, who is based in eastern Libya, said they had taken control of Sirte in a rapid advance.

In April, Haftar's forces launched a military campaign to capture Tripoli from the internationally recognized government but have so far failed to progress beyond the city's outskirts.

However, on Dec. 12, Haftar announced that he had ordered his militants to launch a "decisive battle" to capture the capital.

According to U.N. data, more than 1,000 people have been killed since the start of the operation and more than 5,000 have been injured.

Since the ouster of late ruler Muammar Gaddafi in 2011, two seats of power have emerged in Libya: one in eastern Libya supported mainly by Egypt and the United Arab Emirates and another in Tripoli, which enjoys U.N and international recognition.

Meanwhile, Russia has sent mercenaries from Syria to Libya to fight for renegade Haftar, a London-based daily reported Tuesday.

Citing unnamed sources, the Arabic al-Jadeed reported that the move came with the support of the United Arab Emirates and Egypt.

Two Russian military planes have landed at the Benghazi airport in the past three days carrying fighters from Russian security companies Moran and Schit, it added.

Some Syrian nationals working for the Russian forces were also sent to Libya, the report said.