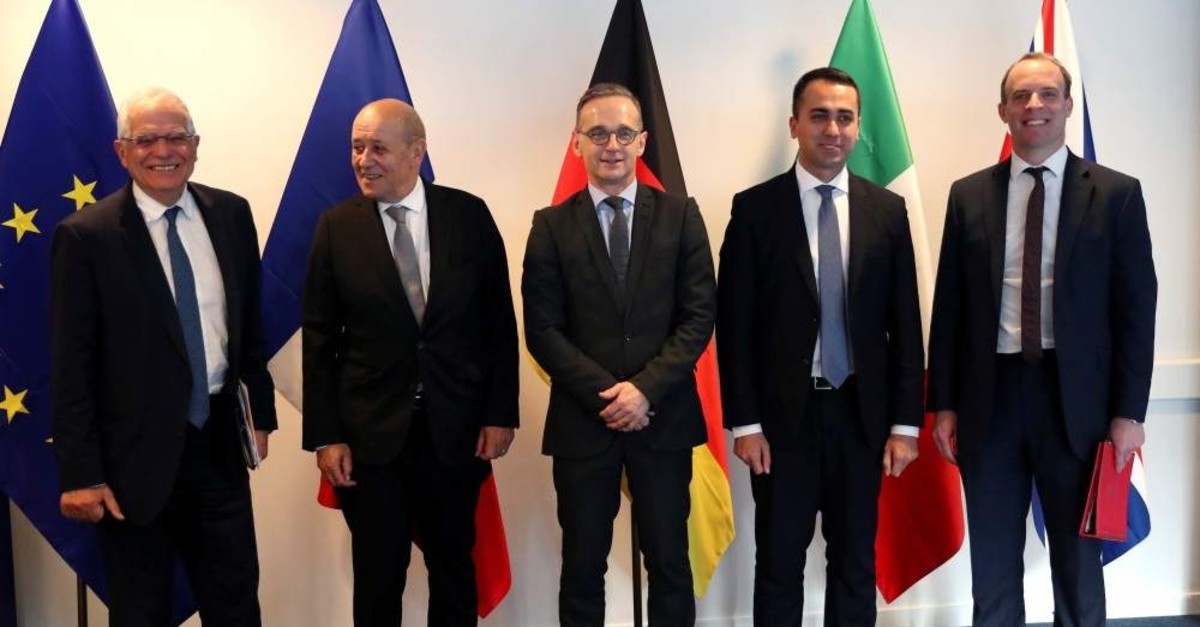 The European Union called for a cease-fire and diplomatic solution in conflict-ravaged Libya after a meeting with the foreign ministers of France, Italy, Germany and the U.K.

"EU doesn't use force, we are asking for diplomatic solutions," EU diplomatic chief Josep Borrell said Tuesday at a news conference in Brussels following the meeting.

The EU's high representative for foreign affairs and security policy also called for the respect of the U.N. arms embargo.

He said the military aid Turkey offered to Libya is considered as foreign interference which the EU rejects.

Last week, Turkey's Parliament passed a motion allowing the government to send troops to Libya's U.N.-recognized Government of National Accord (GNA), which has been besieged by forces of Khalifa Haftar.

Separately, Ankara and Tripoli's GNA signed two separate pacts: one on military cooperation and the other on their maritime boundaries in the Eastern Mediterranean.

Meanwhile, the joint statement issued after the discussions underscored that the EU is convinced that "there is no military solution to the Libyan crisis" and "a protracted conflict ... spread instability across the region and aggravate the threat of terrorism."

"An immediate cessation of hostilities is therefore crucial," it said.

The statement also called all the members of the international community to strictly respect and enforce the U.N. arms embargo.

It said the external interference is fueling the crisis and said if the warring parties of Libya rely on foreign military assistance, it will be to the detriment of the country's national interests and regional stability.

"In particular, we stressed the necessity to avoid unilateral actions such as the signing of agreements which further exacerbate the conflict or actions which create a pretext for external interference that are contrary to the interests of the Libyan people, as well as to European interests, as underlined by the European Council conclusions of Dec. 12, 2019," the statement said.

The EU is also convinced that the Berlin peace process and the U.N.-led negotiations are the only way to bring an end to the conflict in Libya.

Since September, several high-level meetings were held in Berlin to put an end to the Libyan conflict, with the participation of France, Italy, Germany, and the U.K. The negotiations are known as the Berlin peace process.

Turkey aims for a cease-fire

Addressing reporters after a Cabinet meeting in the capital Ankara, Presidential Spokesperson İbrahim Kalın said Turkey mainly cares about the immediate end of clashes and an announcement of a cease-fire in Libya.

"Turkey's priority in Libya is that clashes stop as soon as possible and a cease-fire is reached," Kalın said.

Kalın also criticized the global community for not condemning the attacks by Haftar and his forces.

"Haftar gets away with all kinds of attacks in Libya, the international community has not even condemned them," he said.

Since the ouster of late leader Moammar Gadhafi in 2011, two seats of power have emerged in Libya: one in eastern Libya, supported mainly by Egypt and the United Arab Emirates, and the other in Tripoli, which enjoys U.N. and international recognition.

Haftar is also supported by Russia. Haftar's relations with Russia can be traced back to his military training in Moscow during the Soviet era. Since 2016, Haftar has visited Moscow several times to seek support for his offensive in Libya. He has received high-level welcomes in Moscow, conducting talks with Foreign Minister Sergey Lavrov and Defense Minister Sergey Shoigu.

A meeting between Haftar and Shoigu in Moscow in 2018 was attended by wealthy businessman Yevgeniy Prigozhin, who has been linked to a mercenary group known as the Wagner Group which has been involved in various actions as a private military contractor.

Following the meeting, the presence of nearly 2,000 mercenaries of the Wagner Group in Libya was revealed. The group actively provides military support and armament to Haftar forces.

In April, Haftar's forces launched a military campaign to capture Tripoli from the internationally recognized government.

On Dec. 12, Haftar announced that he ordered his militants to launch a "decisive battle" to capture the city. On Sunday, Haftar's forces attacked a military school in Tripoli.

The GNA announced on Tuesday the withdrawal from Sirte, a strategic coastal town that was recently taken over by Haftar's forces, calling it a "tactical" move.

On late Tuesday, Turkey and Italy's foreign ministers also held talks in the Turkish metropolitan city of Istanbul to discuss the situation in Libya and bilateral relations.

Libya and Italy sit opposite each other on the Mediterranean Sea, making Libya a destination for migrants hoping to get to Europe through Italy's shores.

The Tunisian presidency also made a statement Tuesday and said Turkey did not request to use its airspace or maritime territory.

The statement came in response to false news reported by media outlets.

"Tunisian presidency stressed that it's important to clarify that circulated reports on social media about the request of Turkish President Recep Tayyip Erdoğan from the Tunisian President Kais Saied to use the Tunisian airspace and maritime territory are unfounded," the statement read.

The presidency asserted that the topic was not proposed or discussed.

"What has been promoted today and the previous days from several sources aimed to damage the credibility of the Tunisian position as well as harming Tunisian relations with other brotherly and friendly countries," the Tunisian presidency said.