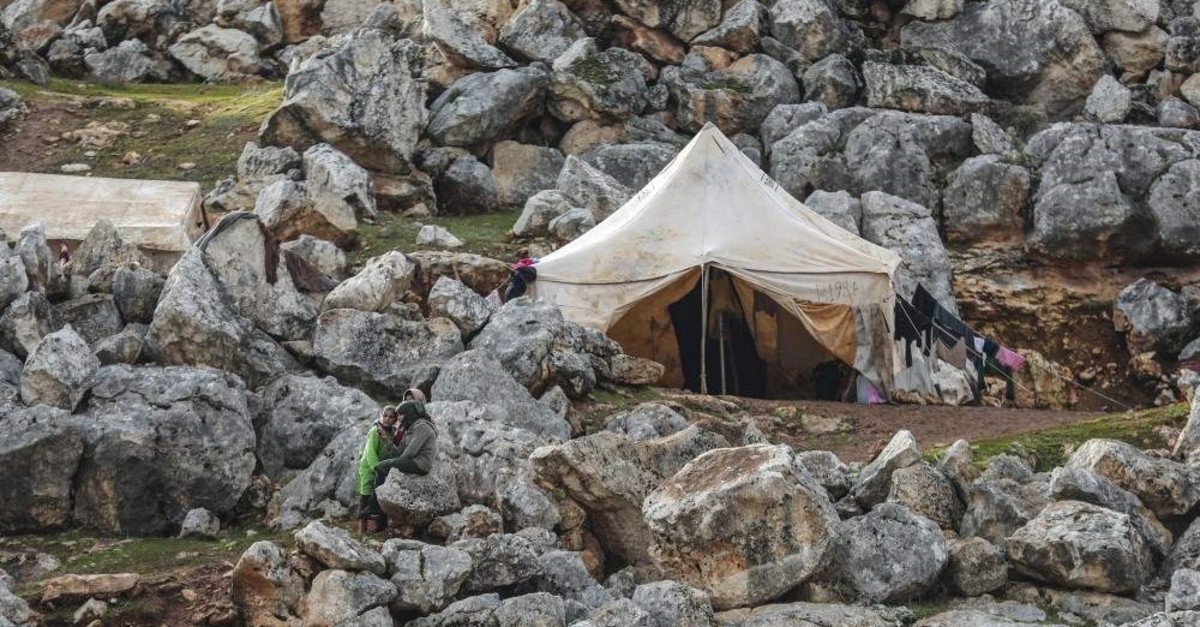 Families fleeing the attacks of the Assad regime and Syria are living in mud camps under harsh winter conditions in the Yavru Fida camp in rural ?dlib ( Esra Hacio?lu - Anadolu Ajans? )
by Daily Sabah with AA Jan 08, 2020 4:19 pm

As attacks on the Idlib de-escalation zone intensify by the day, civilians are forced to flee and seek refuge in camps near the Turkish border under harsh humanitarian conditions

Northwestern Syria is facing one of the worst humanitarian crises as the situation in the de-escalation zone in Idlib further deteriorates with the unceasing attacks by the Bashar Assad regime and its backers as well as the poor living conditions resulting from the assaults on civilians.

The regime attacks that left thousands dead or displaced have forced people to live in camps or in the open near the Turkish border. The displaced people, most of them women and children, are living in harsh conditions, bringing up the risk of epidemics.

Syrians who are trying to survive outdoors, often in the fields or gardens, do not even have access to basic needs like water, food, medicine and heating. Living in "mud cities," these people are desperately looking for a helping hand.

The 90-tent Yavru Fida camp, beset by hard weather conditions, is just one of the camps that expose the dire conditions refugees are forced to live in. Families here set up makeshift tents, burn garbage to meet their heating needs, and are forced to drink or use muddy water.

"Everyone in the camp is poor. They have nothing to continue their lives. Everyone has a child," said Abu Mahmud, an imam from Maarat al-Numan. He added that they did not receive any aid until now.

Ahmed Abdullah, another refugee who has two children and wife at the camp, said, "There is a large number of children here. There is mud and floodwater everywhere. We do not have blankets or spare clothes. We need all kinds of help. I hope someone hears our voice."

More than 300,000 civilians were forced to flee their hometowns due to violent attacks carried out by the Russia-backed Bashar Assad regime on Idlib's de-escalation zone, Turkey's Interior Ministry said Tuesday.

Turkey, as well as the U.N., had repeatedly called on the regime and its supporters to halt violence in the region, saying it would trigger another refugee wave.

"At least 300,000 civilians have fled their homes in southern Idlib since mid-December, following a sharp escalation in hostilities," Mark Cutts, U.N. deputy regional humanitarian coordinator for the Syria crisis, said in a statement.

"This brings the total number of people displaced by fighting in Idlib in the last eight months to over 700,000," Cutts added.

"Many are now sheltering in schools, mosques and other public buildings. Critical shortages of food, shelter, health and winterization assistance, as well as other basic services required for survival, are being reported across Idlib," the statement said.

On Dec. 20, the regime and its allies launched a military campaign mainly in the cities of Maarat al-Numan and Saraqib as well as the surrounding rural areas, capturing 35 residential areas.

The latest reports reveal that at least 253 people were killed and 250 others were injured in Idlib in December alone.

Ümmü Nejva, another refugee living in a camp in Idlib's rural area stated her desperation with the words "We do not have a heating stove, we have no wood for a fire. We also do not have the money to buy these. We gather food from the trash. What shall we do, eat soil and stones?" The mother of three children, who fled to a new camp in Sarmada district, had lost one child in Assad's prisons. The family that had to leave Hama due to the attacks, is now struggling to survive in a 10-square-meter tent.

Nejva told Anadolu Agency that her husband is disabled and cannot work. She said the family is waking up to more difficult days every morning.

Meanwhile, Iran-backed terrorist groups are building up military presence in a rural area west of Aleppo, within the borders of the de-escalation zone. Iran-backed groups fighting beside the Assad regime, are preparing to launch an attack. Forces previously stationed in Aleppo, Deir el-Zour, Hama and Lazikiyah are being moved to western Aleppo. It was reported that convoys carrying tanks and military vehicles carrying armed terrorists were on the move. An attack on opposition forces is expected to take place soon.

More than 1,300 civilians have been killed in attacks by the regime and Russian forces in the de-escalation zone as the cease-fire continues to be violated. Over a million Syrians have moved near the Turkish border following intense attacks. If aggression by the regime and its allies continues, Turkey and Europe face the risk of another refugee influx.

After almost nine years of conflict, forcible displacement and torture, Syria is one of the countries in the world in the greatest need of humanitarian aid. Despite the efforts of many nongovernment organizations from around the world as well as countries like Turkey, the amount of aid reaching the war-torn country is still not at desired levels, prompting the international community to come up with new initiatives to solve the problem.