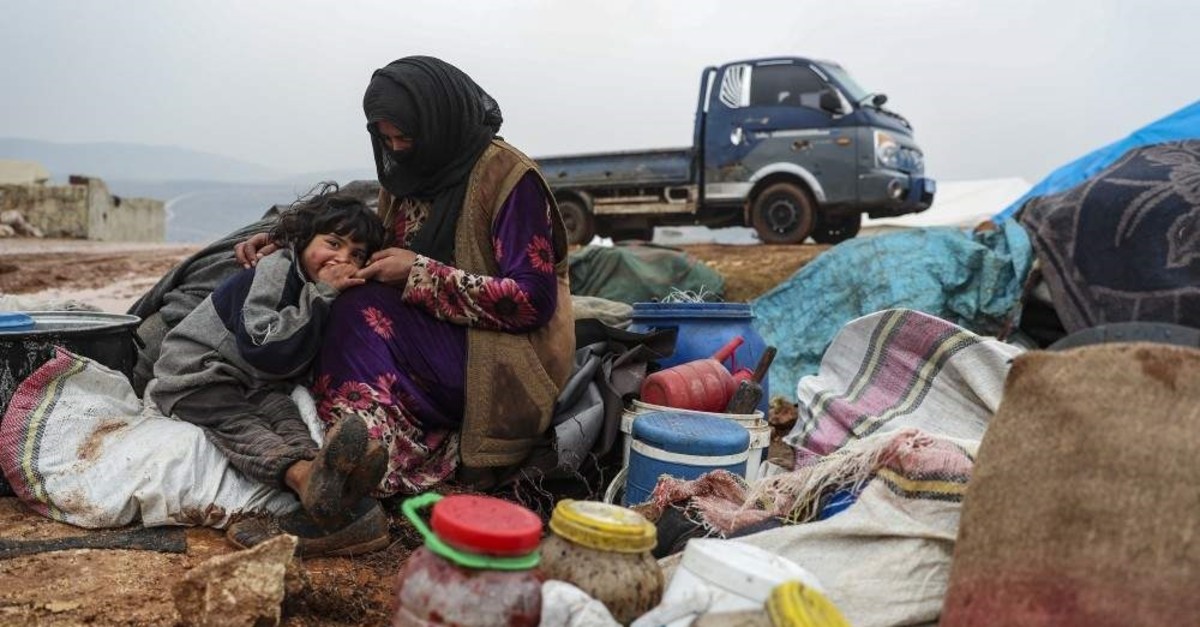 In the past two days, around 20,000 more Syrian civilians in Idlib have fled attacks by the Assad regime and groups supported by Iran and headed toward the Turkish border.

Civilians living in villages in Saraqib and Ma'arat al-Nu'man in the northwestern Idlib province have been fleeing their homes in masses, Anadolu Agency quoted the Syria Response Coordinators Director Muhammad Hallaj as saying on Thursday.

With the latest addition, the total number of people who fled their homes in the past two months reached 379,523, Hallaj said.

Most of the displaced civilians took refuge in areas near the Turkish border, while others are headed toward the areas of Operation Olive Branch and Euphrates Shield.

Turkey has carried out two cross-border operations west of the Euphrates River – Operation Euphrates Shield launched in August 2016 and Operation Olive Branch in January 2018 – to drive terrorist groups, including the YPG and Daesh, from its borders.

While the country liberated northwestern territories from Daesh, it also prevented the YPG from establishing a de facto autonomous region in Syria connecting Afrin in the northwest to Kobani and Jazeera in the northeast, which Ankara describes as a "terror corridor" posing a grave security threat to its national security.

Since then, Turkey has ramped up efforts to get daily life in these areas back to normal and make local people's return to the region possible.

People in the Jabal az Zawiyah region also started to migrate, the report said, adding that officials expect 250,000 more civilians to flee the areas if the attacks intensify.

Thousands of civilians struggle to find refuge in Idlib's camps, which do not have space for more people. Officials also note that the area lacks sufficient infrastructure for the construction of new tents and a decrease in the amount of aid they receive, leaving thousands of families without homes.

Aid agencies have been forced to suspend their work in some areas where hospitals and settlements were heavily targeted. Displaced families lack essential living material such as shelter, tents, beds and blankets, as well as food and water.

The intensification of Russian and Syrian regime airstrikes on southern Idlib since Dec. 16 is causing a new humanitarian catastrophe, forcing tens of thousands to flee their homes, according to the United Nations.

Idlib, home to around 4 million people, is the last opposition stronghold in Syria. Erdoğan and Putin reached an agreement in Sochi on Sept. 17, 2018, which envisaged that the cease-fire in the Idlib region was to be preserved with the withdrawal of heavy arms and radicals from the region.

Following eight months of relative calm provided by the deal, the regime intensified attacks on April 26 under the pretext of fighting the al-Qaida-linked Hayat Tahrir al-Sham (HTS) terrorists holed up in Idlib. The situation has deteriorated since, claiming more civilian lives with every passing day.

Since the Russia-backed regime forces intensified attacks on Idlib in April, almost 1,300 civilians have lost their lives and more than one million people fled to areas near the Turkish border.

Turkey has frequently warned the international community of the immanence of a humanitarian disaster and fresh wave of refugees unless actions are taken and the Syrian regime is restrained. Yet, no worthwhile actions have taken place, as airstrikes and artillery continue to target thousands of civilians.

The Syrian Civil War, which broke out in 2011, has killed hundreds of thousands of people and forced more than five million people to flee the country, while more than seven million are internally displaced.