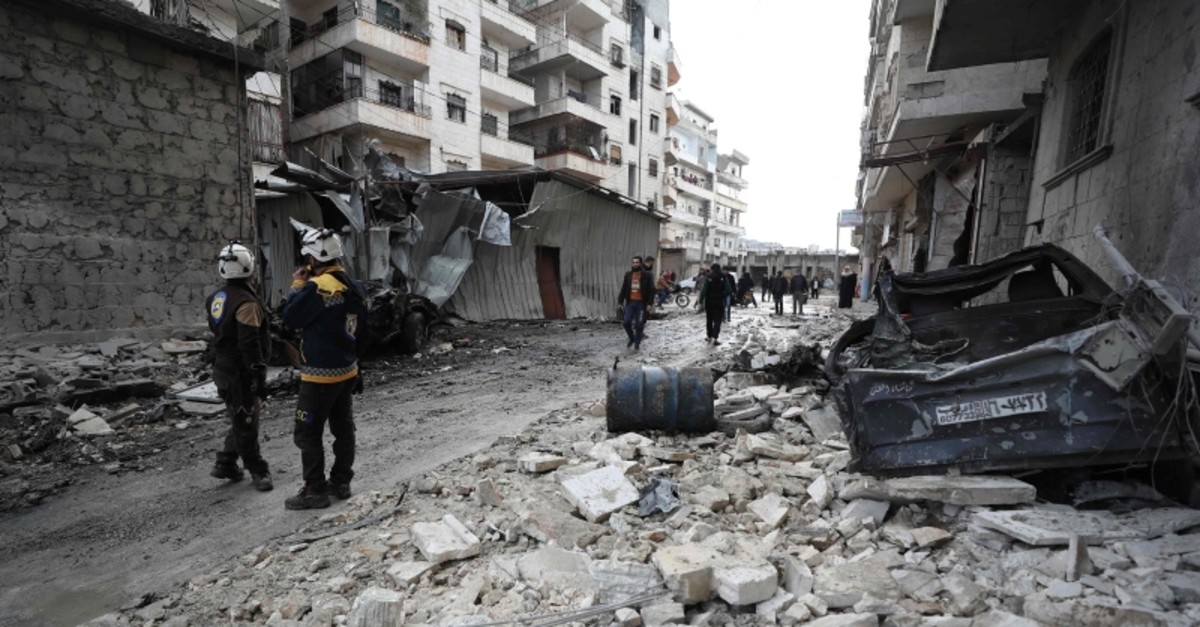 Syrian rescuers known as the White Helmets walk amid the rubble scattered across a street following a reported regime airstrike in the town of Ariha in the Idlib province on Jan. 5, 2020. (AFP Photo)
by Daily Sabah Jan 09, 2020 10:20 pm

After the third failed attempt to establish a cease-fire in the Idlib de-escalation zone, the region is once again at risk of further chaos amid the dire humanitarian situation

The Assad regime continues its assaults on the last opposition-held stronghold in Syria’s northwestern Idlib – despite Russia’s announcement of a cease-fire in the area to begin Thursday afternoon – continuing to put at risk the lives of thousands of people and ignoring the calls of the international community, especially Turkey, for peace. The latest announcement marked the third failed cease-fire attempt in the de-escalation zone, resulting mainly from the Bashar Assad regime’s uncompromising stance.

Later on Friday, the Turkish Defense Ministry announced that Turkey and Russia had agreed on a cease-fire in Idlib set to start at midnight on Jan. 12.

TASS news agency had reported Thursday that a cease-fire had been established in Idlib, citing a Russian defense ministry official.

"According to the agreements with the Turkish side, the cease-fire agreement was introduced in the Idlib de-escalation zone beginning at 2 p.m. Moscow time (11:00 GMT) on Jan. 9, 2020," Russian Maj. Gen. Yury Borenkov said.

Following the announcement of the alleged cease-fire, the Assad regime launched shelling on Idlib’s southern and southeastern areas, specifically targeting the Maarat al-Numan district and the villages of Maar Shoreen, Talmenes, and Maar Shamshah. The attacks on Maarat al-Numan and Tal Mannis continued Friday.

Earlier Wednesday, in a meeting held in Istanbul between President Recep Tayyip Erdoğan and his Russian counterpart Vladimir Putin, both leaders agreed to continue their commitment to “the sovereignty, independence, political unity and territorial integrity of Syria.”

A joint statement by the leaders of the two countries also urged greater humanitarian aid to “all Syrians, without discrimination, politicization or preconditions.”

Turkey had asked Russia previously for a cease-fire in December, sending a delegation led by Deputy Foreign Minister Sedat Önal to Moscow as attacks on the de-escalation zone intensified. The Idlib region has seen an increase in violence in recent weeks as forces loyal to the Assad regime, supported by Russian airstrikes, have launched a fresh assault to capture one of the largest urban centers in the area.

Earlier in August, Damascus scrapped a similar truce agreement only three days after it went into effect, accusing opposition forces and terrorists of targeting a Russian airbase. This move was not surprising since it was already reported by the White Helmets civil defense group during the cease-fire period that at least one civilian had been killed and five had been wounded in Idlib despite the announcement of a cease-fire when Turkey, Russia and Iran, the three guarantors of the Astana peace process, met at the 13th meeting held in Nur-Sultan, the capital of Kazakhstan. Later, toward the end of August, Assad regime ally Russia announced that the Damascus regime forces would observe a new cease-fire in Idlib. It said the truce aimed "to stabilize the situation" in Idlib but the army "reserves the right to respond to violations" by terrorists and allied opposition groups, it added. Yet again, the cease-fire was short-lived as a Russian airstrike was launched on a health facility in Aleppo's western countryside under the same pretexts, the Syrian Observatory for Human Rights (SOHR) reported only a few hours before the agreement was to go into effect.

The Assad regime has repeatedly vowed to take back Idlib, and bombardment has continued despite a cease-fire.

On Dec. 20, the regime and its allies launched a military campaign primarily in the cities of Maarat al-Numan and Saraqib as well as the surrounding rural areas, capturing 35 residential areas.

The latest reports reveal that at least 253 people were killed and 250 others were injured in Idlib in December alone. At least 300,000 civilians have fled their homes in southern Idlib since mid-December, following a sharp escalation in hostilities, the U.N. stated last week.

Turkey and Russia agreed in September 2018 to turn Idlib into a de-escalation zone in which acts of aggression are prohibited.

Despite the Sochi deal, the regime, backed by Moscow, intensified its attacks starting on April 26 under the pretext of fighting the al-Qaida-linked Hayat Tahrir al-Sham (HTS) terrorists holed up in Idlib. Since then, the situation has worsened, taking more civilian lives with each passing day.