Syria cross-border aid to be interrupted unless UN renews resolution 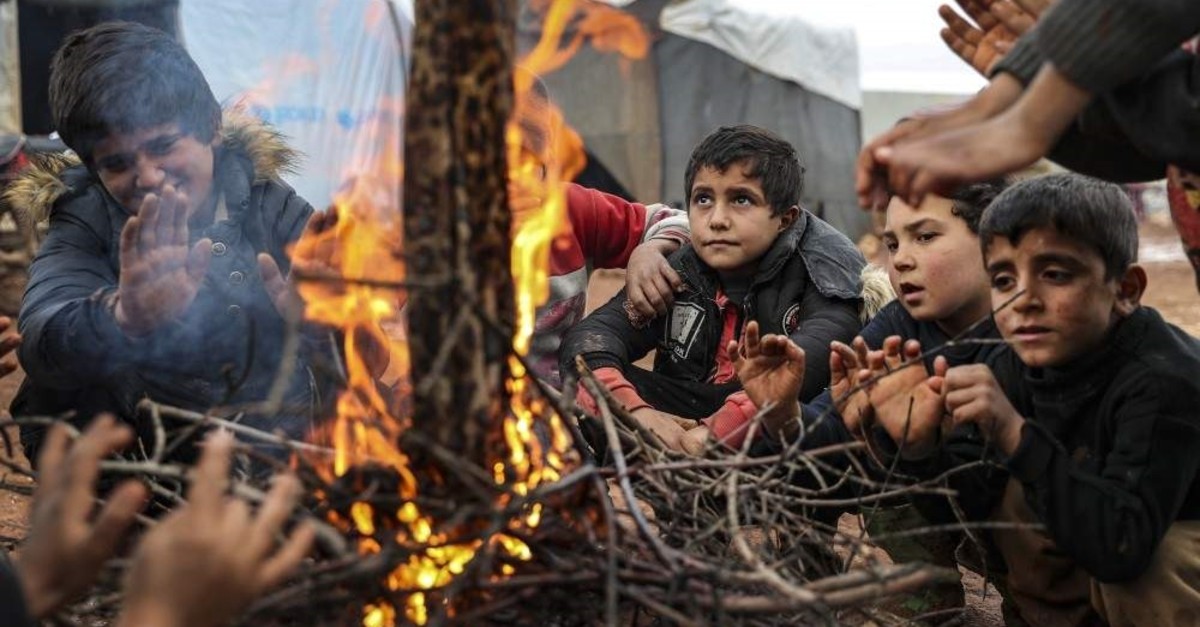 Syrian families running from attacks by the Assad regime and Russia have fled to rural areas near Idlib province, living in dire conditions. (AA Photo)
by daily sabah Jan 10, 2020 1:47 pm

Cross-border humanitarian aid to Syria will end on Jan. 10 unless the U.N. succeeds in taking a step regarding the U.N. Security Council (UNSC) resolution that was vetoed by Russia and China. This would result in a halt of aid from nongovernmental organizations and the U.N. for the thousands of people who struggle to stay alive in the war-torn country after being displaced and dwelling in ramshackle camps.

"To put it very simply, there is no alternative to reaching the people we need to reach in the northwest and northeast (of Syria) without the cross-border" operation, U.N. spokesman Stephane Dujarric told reporters Thursday.

More than 3 million Syrian civilians are completely dependent on cross-border aid, the U.N. said. The aid, food, medicine and other essential items enter Syria without the formal permission of the Bashar Assad regime.

In a compromise bid to win Russian support, Western powers have proposed authorizing three crossing points – two from Turkey and one from Iraq – for six months until July 10, instead of one year.

The council is set to vote on that draft resolution Friday. However, Russia has been adamant that it only wants to approve the two crossing points from Turkey for six months and has put forward its proposal again for a vote Friday, diplomats said.

To pass, a resolution needs a minimum of nine votes in favor and no vetoes by permanent council members Russia, China, the U.S., Britain or France. Russia, a key supporter of the Syrian regime, has said it would support only a six-month extension, involving only two passage points on the Turkish-Syrian border.

Diplomats said the five veto-wielding council members – the U.S., Russia, China, U.K. and France – met four times since last week and were unable to reach a compromise on a draft resolution.

Turkey has said there should be a fifth border gate to the northern Syrian province of Tal Abyad, to increase the capacity of humanitarian aid to Syria. Russia, however, has opposed the idea, suggesting to decrease the number of border gates to just two.

Since 2014, the Security Council has sent aid through four border crossings – Bab al-Salam and Bab al-Hawa in Turkey, al-Yarubiyah in Iraq, and al-Ramtha in Jordan. According to the U.N., around 30,000 U.N. aid trucks had gone into Syria through the crossings since the operation began.

The aid is particularly important for Idlib, an opposition stronghold that has come under increasing bombardment from the Syrian regime and Russian forces in recent weeks.

The Idlib region has seen an uptick in violence recently as forces loyal to the Assad regime, supported by Russian airstrikes, have launched a fresh assault to capture one of the largest urban centers in the area.

"There is no alternative to the cross-border operation," U.N. humanitarian chief Mark Lowcock told the UNSC in November, "There is no plan B."

"Without the cross-border operation, we would see an immediate end of aid supporting millions of civilians," he warned. "That would cause a rapid increase in hunger and disease. A lot more people would flood across the borders, making an existing crisis even worse in the region."

Since the civil war broke out in 2011, the humanitarian disaster has escalated with attacks on civilians continuing almost nine years later. This situation has left tens of thousands of people displaced both internally and in neighboring countries, or in areas near the Turkish border.

The nonstop attacks of the regime and its backers have not only turned the lives of Syrian civilians into a nightmare but have also affected those trying to help. Since 2011, 979 humanitarian aid workers have lost their lives, in addition to the tens of thousands of civilians who have died and those who continue to live in dire humanitarian situations. According to the Syrian Network for Human Rights (SNHR), from the start of the war through Dec. 20, 2019, 882 aid workers died in Assad regime attacks and 97 in Russian attacks.

In addition, humanitarian relief facilities and vehicles were targeted 1,044 times by the Syrian regime and 403 times by Russian forces. Apart from the deaths, the regime also frequently blocks aid workers and aid efforts by detaining workers and bombing centers. Since the start of the war, nearly 3,847 workers have been detained.

David Miliband, head of the International Rescue Committee which supplies aid to 1 million Syrians across the country, said in a letter to UNSC members Wednesday that with humanitarian needs intensifying in the last opposition-held stronghold in northwest Idlib and the northeast, and with tensions escalating in the Middle East, "the last thing the region needs is for the delivery of humanitarian aid to be compromised."

"Humanitarian aid in Syria is not just a lifeline to millions in need, it shores up stability," he stressed.

"The human cost of not renewing this resolution cannot be overstated," Miliband said. "I appeal to you, step up for innocent Syrians ... Syrian lives depend on it."