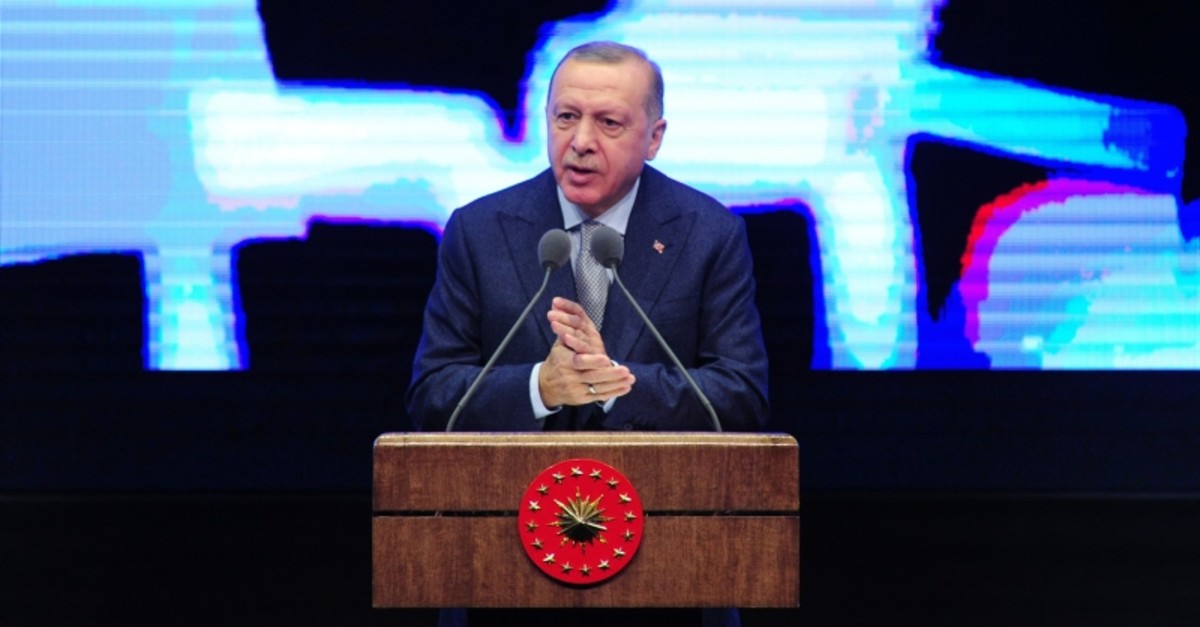 President Recep Tayyip Erdoğan evaluated the first year under the executive presidential system at the Annual Evaluation Meeting for 2019 at Beştepe National Congress and Culture Center in the capital Ankara.

In the past year, Turkish security forces have killed 1,250 PKK terrorists and 388 other terrorists belonging to groups such as al-Qaida and Daesh in several counterterrorism operations, while dozens of terrorist activities have been prevented as well, the president said Thursday.

Praising the number of tourists that visited Turkey in 2019, Erdoğan said that Turkey closed the year with record figures. The number of visitors coming to Turkey increased by 12% and reached 51.5 million in 2019.

He said the number of tourists coming for health services reached 470,000 by the end of November 2019.

Turkey aims to raise the number of medical tourists to 750,000 and gradually to 1.5 million in the coming period, he added.

Regarding the mega projects, the president added that Turkey completed 1,161 projects out of 1,451 in its 2019 action plan.

He said they're planning to open the second phase of the first stage of the airport in June.

The Istanbul Airport, whose first phase officially opened in October 2018, took over air traffic from the former main Atatürk Airport on April 6.

The airport is projected to serve 200 million passengers annually at full capacity after the completion of all four phases with six runways by 2028.

Referring to the maritime traffic on Istanbul's Bosporus, Erdoğan underlined the importance of building a new canal.

"It is not possible to prevent maritime traffic in Bosporus legally, economically and socially. The only solution is to build an alternative canal," he added.

The planned 45-kilometer (nearly 28-mile) canal to be built west of the city center on the European side of the Istanbul province aims to boost the city's marine through-traffic capacity.

The mega-project, which aims to prevent risks posed by vessels carrying dangerous shipments through the Bosporus strait, was approved by the country's Environment and Urbanization Ministry.

Mentioning Turkey's satellite studies, he said Turkey will launch the Turksat 5A satellite in the third quarter of this year, and the first indigenous telecommunication satellite Turksat 6A next year.

With this project, Turkey will be one of 10 countries in the world that produces its own communication satellites.

The Turksat 6A satellite was developed by the Spacecraft Assembly, Integration, and Test (AIT) Center in Ankara.

He reiterated that Turkey, which established its space agency in 2018, would reveal its National Space Program in 2020.

Regarding energy production, Erdoğan said Turkey raised its installed power capacity to 91,267 MW by the end of 2019 from 56,421 MW.

"We are following the exploration of hydrocarbon resources in the Eastern Mediterranean with a diplomatic approach to make contributions to peace and wealth," he said. "Through strengthening production, export and employment rate and protecting our rights on the international front, especially in the Mediterranean region, we are opening the doors of a new rising period."

Ankara did not allow any initiatives to exclude Turkey and the Turkish Republic of Northern Cyprus (TRNC) from the regional energy equation, he stressed.

In addition to that, he mentioned that Turkey recorded the highest growth in labor force participation in the last 12 years among Organization for Economic Cooperation and Development (OECD) countries.

According to the New Economic Program, the goal is to increase employment by 3.2 million people in the next three years, lowering the unemployment rate to 9.8% by 2022.

Touching on Borsa Istanbul's closing performance, he said that it jumped from 10,600 points in 2003 to over 121,000 points on Tuesday, seeing the highest level in its history.