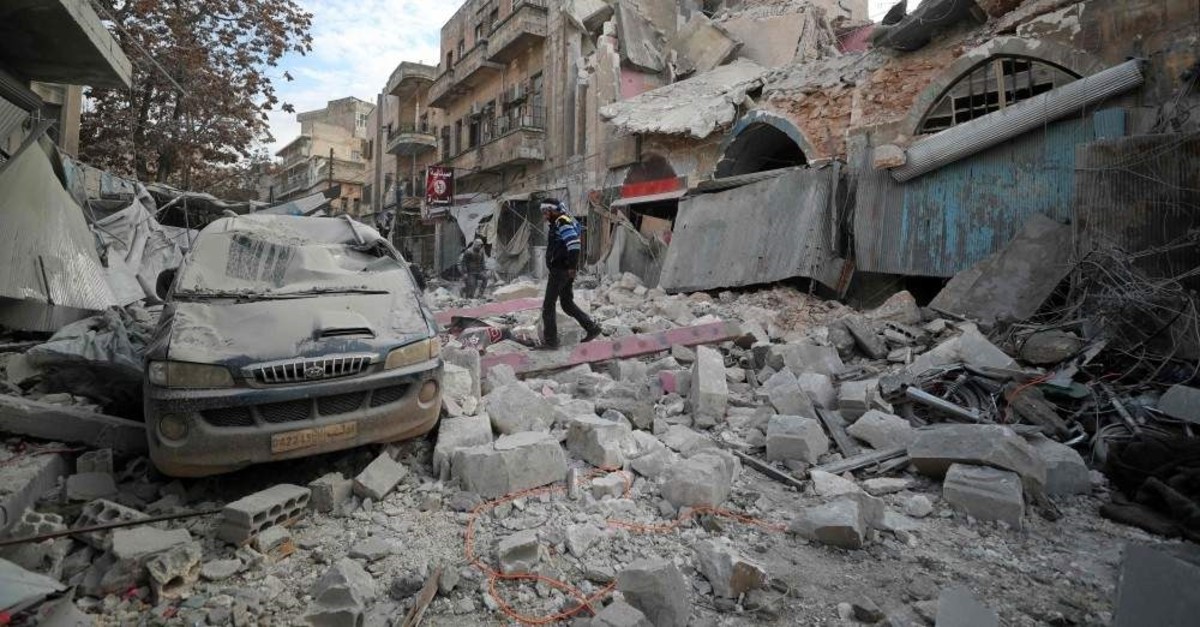 A Syrian man walks on the rubble of a building following a regime airstrike on the town of Ariha in Syria's last major opposition bastion of Idlib, Jan. 15, 2020. (AFP Photo)
by Daily Sabah with Agencies Jan 16, 2020 2:32 pm
At least 18 civilians were killed in airstrikes on Wednesday by the Bashar Assad regime and Russia in Idlib, targeting bustling areas of the last major opposition bastion in northwestern Syria despite a fresh truce initiated by Turkey and Russia.

The raids hit a vegetable market and repair shops in Idlib, the capital of the opposition-held province of the same name, said the Syrian Observatory for Human Rights.

The Britain-based monitoring group had earlier reported nine civilians dead and at least 20 wounded but warned that the death toll was likely to rise as many were seriously injured.

It said two children and a rescue worker were among the dead. The Syrian Civil Defense, also known as the White Helmets, said one of its volunteers was killed in the strike.

The Observatory also reported dozens of regime and Russian airstrikes in the broader Idlib province, particularly in the southern zone close to regime-held territory. It said one person had died in the village of Al-Has.

Idlib has come under mounting bombardment in recent weeks, displacing tens of thousands of people in the northwestern province home to some three million.

A truce brokered this month by regime ally Russia and opposition backer Turkey was, in principle, to have taken effect on Sunday.

It follows a truce announced in late August, after strikes by the regime and its ally Russia killed some 1,000 civilians in four months, according to the Observatory.

A total of 313 civilians, including 100 children, were killed, 1,843 others injured and 382,466 Syrians were forced to flee their homes since November 2019, according to data provided by the Coordinators of Interventions in Syria, a local rights group.

The aggression by the regime and its allies have also caused considerable financial damage for Syrians, estimated to be at $322 million.

The majority of civilians fleeing attacks take shelter either near the Turkish border or in areas falling under territories Turkey cleared of terror elements following Operation Olive Branch or Operation Euphrates Shield.

With migration starting in the Jebel ez-Zawiyah region in southern Idlib as well, it is feared that about a quarter-million people might be displaced if attacks intensify any further.

Having fled deadly attacks, thousands of families are in dire need of humanitarian aid.

Idlib is often viewed as the fortress of the Syrian opposition and anti-regime armed groups since the eruption of the civil war. With internal migration due to regime aggression, the population of Idlib climbed to four million and it has been under the opposition's control since 2015. Idlib is one of the most targeted areas by the regime.

On May 4-5, 2017, a total of four de-escalation zones were established in Syria under the auspices of Turkey, Russia, and Iran. However, the regime and Iran-backed terrorists captured all these territories, with the exception of Idlib, with Russian aerial assistance.

The Damascus regime has repeatedly vowed to retake Idlib. According to the Britain-based war monitor, the fighting flared late on Wednesday in areas south of Maaret al-Numan, the key target of the Syrian regime's latest military offensive.

The regime and allied forces took two more villages in their advance toward the key town of Maaret al-Numan, the Syrian Observatory for Human Rights said.

It added that regime forces were now just seven kilometers from Maaret al-Numan, a town that was one of the bastions of the uprising against Assad's dictatorial rule.

Cease-fires have failed to quell the violence. The regime offensive that began last month aims at reopening the highway linking the capital Damascus with the northern city of Aleppo. The highway has been closed in Idlib since 2012 when opposition forces captured several towns along the route.

Although the Russian Defense Ministry claimed the cease-fire began in Syria's Idlib region on Jan. 9, the regime and Iran-backed terrorist groups continued their ground attacks.

The cease-fire has been broken a few times with the ground attacks, but Wednesday's attack has been the first airstrike attack since the cease-fire was announced.

Turkey pushed hard for a cease-fire in Idlib after the region endured months of battering by forces loyal to the Assad regime and its allies, sending about a million civilian refugees flocking toward the Turkish border.

Also, Turkey and Russia agreed in September 2018 to turn Idlib into a de-escalation zone in which acts of aggression are expressly prohibited.

More than one million Syrians have moved near the Turkish border due to intense attacks over the last year.

Residents say few people have crossed into regime-controlled areas, where they fear retribution, while most have headed to the relative safety of areas near the Turkish border.

Many of the residents of the opposition enclave fear the return of Assad's authoritarian rule and look to Turkey to halt the Russian-led campaign that has killed hundreds and left dozens of towns and villages in ruins.

President Tayyip Erdoğan said Turkey was determined to stop Syrian regime violations of the cease-fire in the northwest.

The United Nations' humanitarian coordination agency, OCHA, said that since Dec. 1, almost 350,000 people had fled their homes, mainly heading northward near the Turkish border from southern Idlib which has borne the brunt of regime strikes.

U.N. spokesman Stephane Dujarric on Wednesday said in a statement that the world body is increasingly concerned about the safety of those civilians.

"The U.N. urges all parties, and those with influence over those parties, to ensure the protection of civilians and civilian infrastructure, in line with their obligations under international humanitarian law," he said.

The international body, which is responsible for delivering most of the aid to Idlib, has warned of the growing risk of a humanitarian catastrophe as people flee the fighting toward the Turkish border.