Idlib under regime fire despite Russia's claims of 'flawless' truce 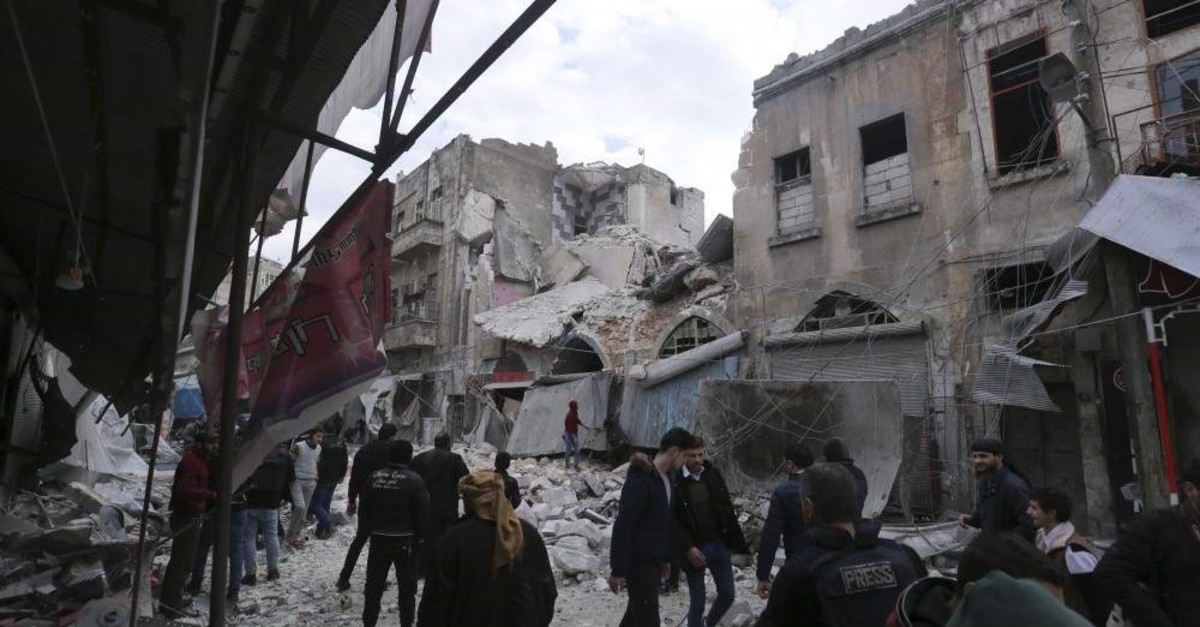 While the number of forcibly displaced Syrian refugees escaping regime airstrikes in Idlib increases each day even after a truce was declared, Russia still overlooks the humanitarian crisis, claiming that the peace is going smoothly

The northern Syrian province of Idlib continues to be a scene for regime attacks, causing a massive humanitarian crisis that led hundreds of thousands to be displaced and headed closer to the Turkish border. Yet, despite the proven record of the attacks as well as the human suffering, the regime's main backer Russia is still in denial of the facts, claiming that the cease-fire that was declared last week with Turkey has been ongoing without any misconduct.

On Thursday, Russia's Ministry of Defense denied media reports that it had bombed civilian targets in the de-escalation zone in Idlib, saying there had been no military flights since a cease-fire was introduced on Jan. 9, the RIA news agency reported.

"Reports by a number of outlets about shelling allegedly by Russian aviation on civilian targets in the Idlib de-escalation zone does not correspond to reality," Russian major-general Yury Borenkov was quoted by the RIA as saying.

Yet, the reports from the region as well as the expert opinion on the issue are far from approving Russia's claims. Instead, they show that the tension in the conflicted zone rises each day as the regime insists on overlooking the truce and targeting civilians through its airstrikes.

The United Nations human rights chief Michelle Bachelet called Friday for an immediate cessation of hostilities in Idlib, saying that the latest Syrian cease-fire had "yet again failed to protect civilians."

"It is deeply distressing that civilians are still being killed on a daily basis in missile strikes from both the air and ground," Bachelet said in a statement on the cease-fire.

President Recep Tayyip Erdoğan on Friday also expressed concern about recent developments in the embattled Idlib province in northwestern Syria, saying there were indications that the Syrian regime did not comply with cease-fire deals initiated by Turkey and Russia."(Idlib) is clear proof that the regime does not comply with the steps we have taken regarding the cease-fire," Erdoğan told reporters in Istanbul.

Turkey announced Friday that a new cease-fire in Idlib, which has been rocked by violence – although "acts of aggression" are already officially banned – was set to start just after midnight Sunday, Jan. 12 while Russia announced the date as Jan. 9. Turkey had previously asked Russia for a cease-fire in December, sending a delegation led by Deputy Foreign Minister Sedat Önal to Moscow as attacks on the de-escalation zone intensified.

However, only two days after the announcement, Russian jets struck several opposition-held towns in Idlib for the first time since the cease-fire, witnesses and sources said. They said the towns of Khan al Subl, Maasaran and several others in the southern Idlib province were targeted after a two-day lull in aerial strikes against the last opposition bastion that had been pounded for over a month in a renewed assault.

The conflict in Idlib dates back almost to the beginning of the civil war, as the province slowly turned into a stronghold for the opposition and later, is left as the only opposition stronghold in the whole country. Idlib, which received massive migrant flows through internal displacement and reached a population number as large as 4 million, was taken under control by opposition forces in 2015 for the first time and since then, became an instant target for regime attacks.

On May 4 and 5, 2017, during an Astana meeting organized with the participation of Turkey, Russia and Iran, de-escalation zones have been established in four main spots in Syria, one of which was Idlib.

However, the regime and its backers overlooked the decision and took all the de-escalation zones under its control, except for Idlib. Escaping from the regime attacks, hundreds of thousands of civilians had to flee the area and resettle near the Turkish border.

Turkey and Russia sat at the table once again in 2018 and signed the Sochi deal this time with an attempt to ease the tensions in Idlib and put an end to the attacks. Yet, once again, the deal did not work on the regime as it continued its strikes. As a result, since the beginning of 2019, approximately 1,300,000 civilians migrated from Idlib to the Turkish border while more than 1,600 civilians were killed by the regime attacks.

The Syrian Intervention Coordinatorship reported Friday that due to the recent attacks, a new flow of 13,000 displaced Syrians have arrived at the Turkish border within the past two days.

For those who were displaced, however, a new struggle begins in the refugee camps as the winter conditions and the lack of food and heating devices make survival more difficult every day.

Refugees in seek of a warm home

A mother who lost 13 members of her family to the regime attacks and had to take refuge near the Turkish border, Um Mustafa, said that she is dreaming of sleeping in a warm home.

Speaking to Anadolu Agency (AA), Mustafa, a member of one of the 65 families who have resettled in the Maarbun region in northern Idlib, near Turkey, said that they have to share each tent with another family since there is a lack of available tents.

"Since we cannot find any diesel fuel, we burn whatever we can find," she said, explaining the alternative methods they use to get warm. Mustafa added that their tents are not good for the cold weather. "Since children get cold in the nights, I cover them up with everything that I can find," she added.

"God is big. We hope to sleep in a warm place again one day," she said in tears, remembering her old house that she had to leave due to regime bombardment.

Expressing that she had to leave her house in tears, Mustafa stated that her crying did not stop during her migration route.

"When I put my head on to the pillow, I pray for these people's sufferings to come to an end. May God enable these people to return to their homes, hometowns," the sorrowful woman said, indicating that each sound of a plane reminds her of her lost children, hometown and pain.

Yet, despite all of these personal accounts and documented sufferings, the regime not only continues its attacks in Idlib but also expands its aggressive attitude to the other regions as well. The regime and its backers Friday launched a ground offensive in Aleppo province, which was, again, designated as a de-escalation zone.

On Thursday, the same region was targeted by Russian warplanes and the reports stated that the attack preparations of regime-related groups have been ongoing in the region since last week. Iran's revolutionary guards are especially known to have sent a few troops to the region, alongside with many tanks and armed vehicles.

Earlier in August, Damascus scrapped a similar truce agreement only three days after it went into effect, accusing opposition forces and terrorists of targeting a Russian airbase. This move was not surprising since it was already reported by the White Helmets civil defense group during the cease-fire period that at least one civilian had been killed and five had been wounded in Idlib despite the announcement of a cease-fire in the Astana peace process' 13th meeting.

Later, toward the end of August, the Assad regime's ally Russia announced that they would observe a new cease-fire in Idlib. It said the truce aimed "to stabilize the situation" in Idlib but the army "reserves the right to respond to violations" by terrorists and allied opposition groups, it added. Yet again, the cease-fire was short-lived as a Russian airstrike was launched on a health facility in Aleppo's western countryside under the same pretexts, the Syrian Observatory for Human Rights (SOHR) reported only a few hours before the agreement was to go into effect.