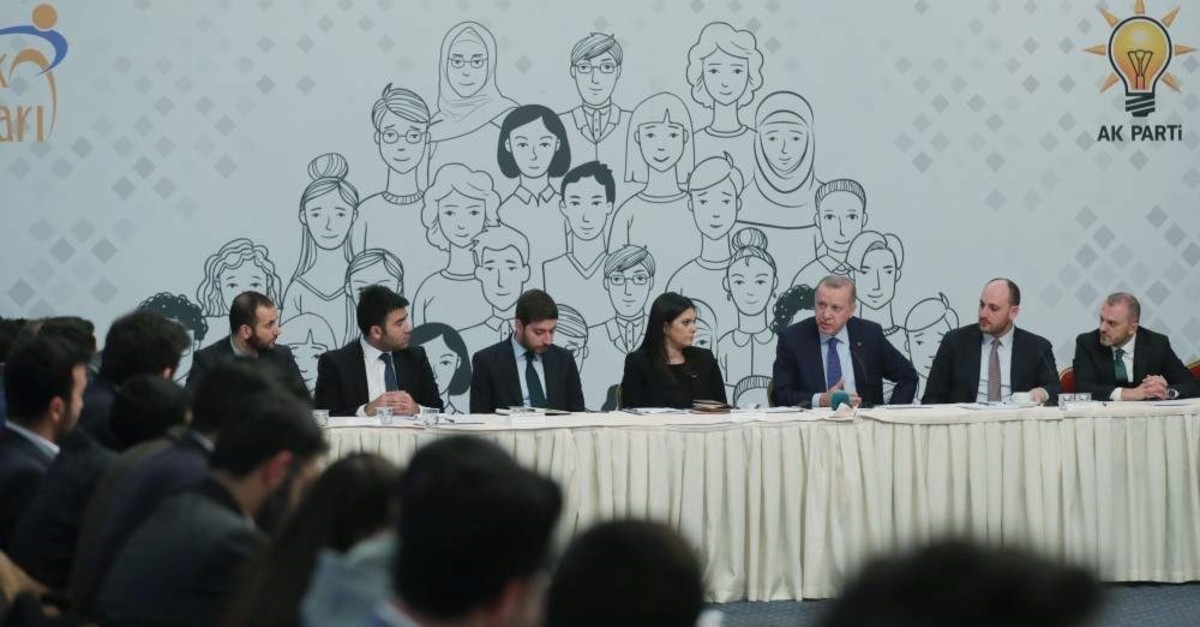 | AA Photo
by Eda Işık Jan 17, 2020 6:28 pm
President Recep Tayyip Erdoğan has asked that efforts be made to better inform young people in Turkey on the political situation of the country and the region.

The president told attendees: "Explain the situation in which Turkey finds itself well. The youth have to understand what is going on in Syria and the developments in Libya, especially, and these issues have to be explained to them very well."

The previous day, Erdoğan had attended the Justice and Development Party's (AK Party) Brother Municipalities Consultation Meeting, where he met with young people attending a meeting on the role of NGOs in developing opportunities for the Turkish youth.

As a result of Turkey's geostrategic location, the country has seen a high number of conflicts erupt within its neighborhood. Among these include the Libyan and Syrian conflicts which have been raging since 2011. In order to ensure the stability of the region and aid those affected by these conflicts, Turkey has carried out several operations as well as humanitarian aid projects. Yet, it can still be seen that Western countries, in particular, have been engaged in a propaganda campaign tarnishing Ankara, which aims to help the Syrian and Libyan people by mitigating or preventing dire humanitarian catastrophes from occurring in those war-ravaged countries.

The AK Party's youth wing has nearly 2 million members, the head of the youth branches Ahmet Büyükgümüş said in March, adding that this was larger than the total number of members of the opposition Republican People's Party (CHP). On the other hand, the total number of the party's members constitutes a figure of more than 10 million, AK Party Deputy Chairman Erkan Kandemir said late 2019. The party has long put an emphasis on rejuvenating itself and expanding the number of young people in its structure.

Turkey has the largest percentage of young people of any European nation, with a population in which 16% of the overall populace are between 15-24 years of age. Thus, Turkey's political future is expected to be highly affected by the young voters' preferences.

With the changes that come with the new presidential system, the age for parliamentary candidacy was lowered from 25 to 18 in 2018.

Transforming Turkish politics for the last 18 years, the AK Party has been preparing to lead new reforms that will enable Turkey to reach its 2023 targets. Only one year after its foundation, the AK Party saw great achievement in its first general elections, garnering 34.3% of the vote in the Nov. 3, 2002 elections and earning 363 seats in Parliament.

Since then, the AK Party has never lost an election. In the last 17 years under the AK Party administration, Turkey witnessed rapid development in many areas, including economy, democracy, individual rights and liberties, health and educational services in a stable political environment.
RELATED TOPICS