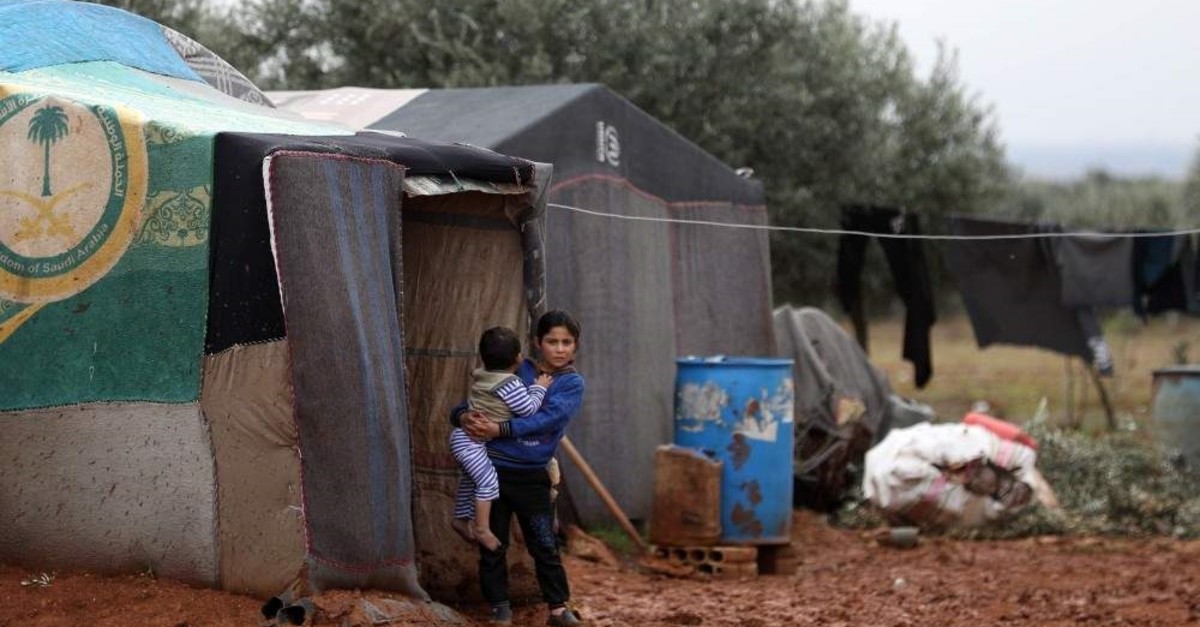 Syrian children, who fled air strikes in their hometown, are pictured near tents at an informal camp for displaced people where they live with their families in Idlib, Jan. 7, 2020. (AFP PHOTO)
by Daily Sabah with AA Jan 17, 2020 5:21 pm

The brutal war in Syria has robbed children of their childhood as they are forced to participate in and endure numerous violations of their rights, according to a U.N. report released Thursday.

The latest report for the U.N. Commission of Inquiry for Syria released its findings at the U.N. in Geneva, noting that children in Syrian remained "acutely vulnerable to violence and abuse."

The 25-page report is titled "They have erased the dreams of my children," and commission chair Paulo Sergio Pinheiro described the circumstances it recounts as a "disgrace" and "scandal."

In the report, the three-person commission outlines violations of children's rights in the conflict, with over 5 million minors displaced internally and abroad.

"I am appalled by the flagrant disregard for the laws of war and the Convention on the Rights of the Child by all parties involved in the conflict," said Pinheiro.

"While the government of the Syrian Arab Republic has the primary responsibility for the protection of boys and girls in the country, all of the actors in this conflict must do more to protect children and preserve the country's future generation," he noted.

In an excerpt, the report said, "Robbed of their childhood and forced to participate in a brutal war, children have been killed and maimed in vast numbers."

It underlined that in addition to regularly targeting children using sniper fire, regime forces have also deployed cluster munitions, thermobaric bombs and chemical weapons, often against civilian objects such as schools and hospitals.

The report stated that the Daesh terrorist group "subjected girls as young as 9 to sexual slavery and other forms of sexual violence and systematically recruited and used children for direct participation in hostilities."

It added that the group launched indiscriminate attacks on towns and villages that killed and injured scores of children.

"Most emblematically, children were both victims of public executions and forced into the role of executors by the group," the report said.

The effects of the civil war on Syrian children have been monitored since the beginning of the war, as well as the changes in the circumstances for the ones who live in the areas liberated by the Turkish military. Much of northern Syria, especially towns near the Turkish border, has become safer following the three Turkey-backed operations.

Millions fleeing attacks by Bashar Assad's forces went north in search of a safe haven. They must resort to living in tents or decrepit buildings, and most are dependent on aid for survival. Constant displacement in the country leads to irregularities in the lives of children, particularly affecting their access to education.

Still, schools have been renovated in the liberated provinces, enabling the children there to continue their education. For instance, in December, a school in the northern Syrian town of Tal Abyad reopened after renovation work was completed. The renovation was carried out by the National Defense Ministry and the governorate of Şanlıurfa in southeastern Turkey. The school has six classrooms and 115 students and had been seriously damaged by YPG terrorists.