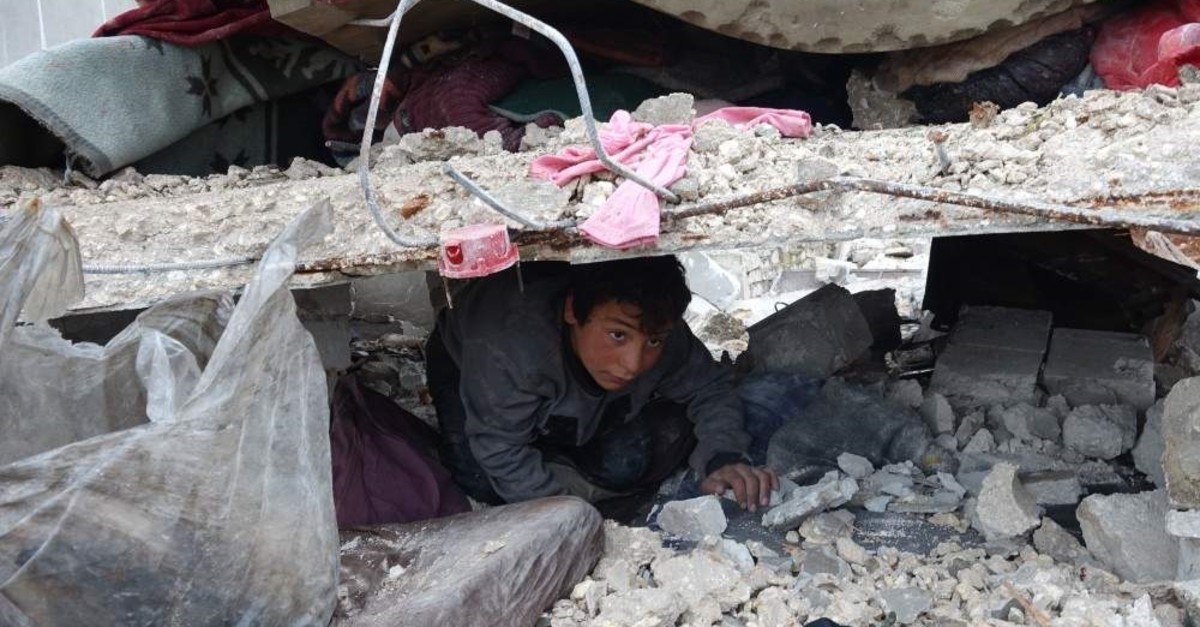 At least nine civilians were killed by Russian airstrikes in Syria's northwestern Idlib province on Jan. 20, 2020. (AA Photo)
by Daily Sabah with Agencies Jan 21, 2020 4:06 pm
At least 38 people, including 10 children, have lost their lives in just six days since Russia violated the cease-fire agreement with Turkey in Syria's northwestern Idlib province, the White Helmets civil defense group said early Tuesday, while other sources indicate that this number is even higher.

"Civilians had only three days of reprieve before massacres commenced again," the White Helmets wrote on Twitter.

According to the Syria Intervention Coordinatorship speaking to Anadolu Agency (AA), at least 31,000 people were displaced due to airstrikes, 232 of which were carried out by Russia and 89 by the Bashar Assad regime. The displaced people of Idlib mostly sought refuge in the Operation Olive Branch and Operation Euphrates Shield areas near the Turkish border.

The Idlib de-escalation zone has seen a surge in violence and attacks on civilians by the Assad regime and its backers despite a cease-fire brokered through the efforts of Turkey. Ankara announced on Jan. 10 that a new cease-fire in Idlib, the third failed attempt of its kind, was set to start just after midnight Sunday, Jan. 12.

However, only days after the announcement, Russian jets struck several opposition-held towns in Idlib, witnesses and sources said. They said the towns of Khan al Subl, Maasaran and several others in the southern Idlib region were targeted after a two-day lull in aerial strikes against the last opposition bastion that had been pounded for over a month in a renewed assault.

Most recently, 12 civilians were killed Tuesday as Russian warplanes targeted various residential areas in Idlib. According to an opposition observatory, seven of these victims were children.

"The (Syrian) regime's aggressive attitude in the field continues. The regime must be stopped for the continuation of the diplomatic process," Foreign Minister Mevlüt Çavuşoğlu stated on Tuesday in Switzerland's Davos in an interview with broadcaster NTV.

The White Helmets said Tuesday that "88 people, including a White Helmet volunteer, 31 children, have lost their lives since the beginning of January after Russian and regime warplanes launched more than 3000 attacks on civilian homes, public markets, schools, and other vital facilities," adding that three hospitals, five schools, six markets, three civil defense centers and many civilian gathering places and facilities were among the targets of Russian and regime warplanes and artillery shelling since the beginning of the month.

Furthermore, both the Syrian Observatory for Human Rights (SOHR) and the White Helmets announced that nine people lost their lives, five of them children, as a result of Russian airstrikes in the countryside of Aleppo on Monday. Twenty-four others were injured. Three girls were killed in the village of Kfar Taal while four civilians, including two other children, died in separate strikes that hit other villages in the area. The White Helmets also stated that two people had been killed by the artillery shelling of the terrorist YPG-led SDF in Afrin province.

The conflict in Idlib dates back almost to the beginning of the civil war, as the province slowly turned into a stronghold for the opposition and later became the only opposition stronghold in the whole country. Idlib, which received massive migrant flows through internal displacement and reached a population as large as 4 million, was taken under control by opposition forces in 2015 for the first time. Since then, it has become a continual target for regime attacks.

Over 1 million Syrians have moved near the Turkish border due to intense attacks over the last year.

White Helmets head Raed al-Saleh told Anadolu Agency that the Assad regime is attempting to take Idlib by emptying it. "The cease-fire in Idlib seems to be collapsed, it was relatively better. Those who migrated would return home, but the regime and Russia did not abide by the cease-fire same as before," Saleh stated.

Saying that further attacks would render a humanitarian disaster inevitable, Saleh continued: "The local people have lost hope. Now, families cannot even dream of returning home. Humanitarian aid has faltered. The locals do not know what will happen in the future."

Speaking about the displacement in Idlib, Çavuşoğlu stated: "We prefer to help the displaced people within the borders of Idlib. We work for camps in which people can live. There are nearly 4 million people. If the attacks continue, millions of people will be at our door. Neither we nor the West can overcome this."

The Humanitarian Relief Foundation (IHH) has started to build briquette houses for Syrian refugees fleeing conflict zones as a more stable and permanent alternative to tents in areas near the border. More than 120 houses were built so far, Syria Coordinator of the IHH Zeki Tahiroğlu stated Sunday during an aid campaign for Idlib in Turkey's Afyonkarahisar province. Tahiroğlu also indicated that more than 450,000 people were displaced in the last five months in Idlib.

"The regime did not abide by any agreement and the bombardment has continued. If no serious sanctions are applied internationally, this will go on. Recently there was a mention about a cease-fire, yet the day it was announced, 350 rockets were launched," Tahiroğlu said, underlining that even though the attacked people are called "terrorists," they are in reality civilians.

Saying that the IHH has been aiding migrants for nine years, Tahiroğlu said that the briquette house campaign gained huge support in Turkey.

"The Turkish people are highly sensitive on this issue. We have collected a fund that would enable us to build more than 4,000 briquette houses within the scope of the project," he added.

On the other hand, as a result of a campaign started by the ruling Justice and Development Party's (AK Party) youth branches in Hatay province's Reyhanlı district, three trucks of humanitarian aid were sent to Idlib.
RELATED TOPICS