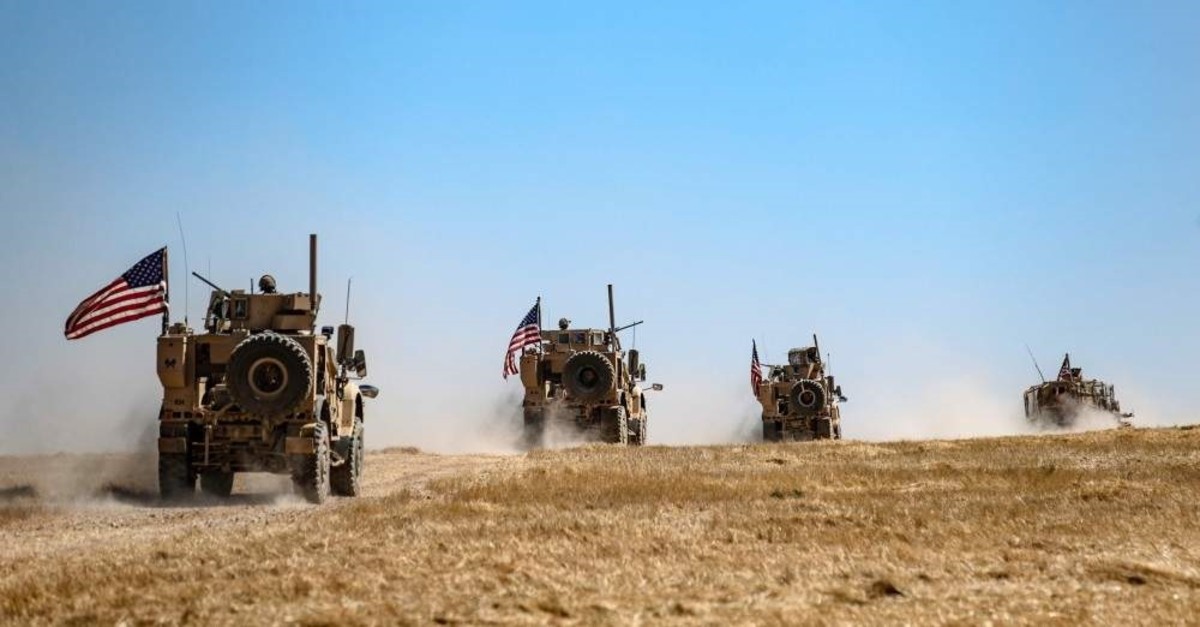 The tensions between U.S. and Russia military forces in northeastern Syria have been escalating as both sides try to gain control over key oil fields in the region.
In the latest development, U.S. troops deployed in the regions of northeastern Syria under the YPG/PKK terrorist group's control blocked a Russian military convoy trying to gain access to key oil fields in Al-Hasakah province Tuesday.
The standoff reportedly has ended without any significant clashes or any real risk of violence between the two sides.
The move came amid an ongoing dispute between the U.S. and Russia over the Rumeylan oil field in northeast Al-Hasakah.
U.S. military forces stopped the Russian forces before they reached the targeted oil fields. The Russian convoy, which consisted of five armored personnel carriers and a pickup truck, then apparently turned back and returned to their home base.

Despite no significant conflict being reported, the incident has become a reminder of the high stakes in Syria, where U.S. military activity aims to guard oil fields and prevent them from falling into the hands of other actors, including Russia and extremist groups.

The oil fields are concentrated in the province of Deir el-Zour in eastern Syria, near the Iraqi border, and Al-Hasakah in the northeast.

U.S. troops were initially deployed in Syria for the mission of defeating Daesh. Although U.S. President Donald Trump declared a decisive victory over the Daesh terror group and launched American soldiers’ withdrawal process in December 2018 – saying defeating Daesh was the sole reason for American presence in the country – the Trump administration adjusted that mission last year by assigning several hundred U.S. troops to remain to guard oil fields from the terror group, which used Syrian fuel as a key income source during its rise.

Trump once again announced a withdrawal of U.S. forces from northern Syria in October, ahead of Turkey’s Operation Peace Spring to eliminate YPG/PKK terrorists from the area east of the Euphrates in northern Syria to secure Turkey's borders, aid in the safe return of Syrian refugees and ensure Syria's territorial integrity.

Following the decision, the U.S. later decided to retain around 500 troops by moving them near oil fields to guard these facilities, along with YPG/PKK forces, who are currently the main beneficiaries of the production. U.S. Defence Secretary Mark Esper confirmed that the mission of U.S. troops in the region also includes preventing Russian and regime forces from taking control of Syrian oil, in addition to guarding against Daesh terrorists.

On the other hand, Russia supports the Assad regime in Syria by providing active military assistance to regain control of oil production and have their eyes on these facilities. Russia also aims to increase its influence over the region.

The YPG/PKK-led forces began taking over control from Daesh terrorists of major oil fields in the northeast of Syria and along the Euphrates in 2017. Although Operation Peace Spring in northern Syria has resulted in YPG/PKK terrorists losing significant amounts of territory, most of the oil fields east of the Euphrates remain under the terrorist group’s control.

Last week, YPG/PKK terrorists prevented Russian soldiers from passing through the city of Qamishli to establish a military zone near the Rumeylan oil field.

Despite NATO ally Turkey's legitimate security concerns, the U.S. has partnered with the YPG/PKK-dominated Syrian Democratic Forces (SDF) in its fight against Daesh in northern Syria.