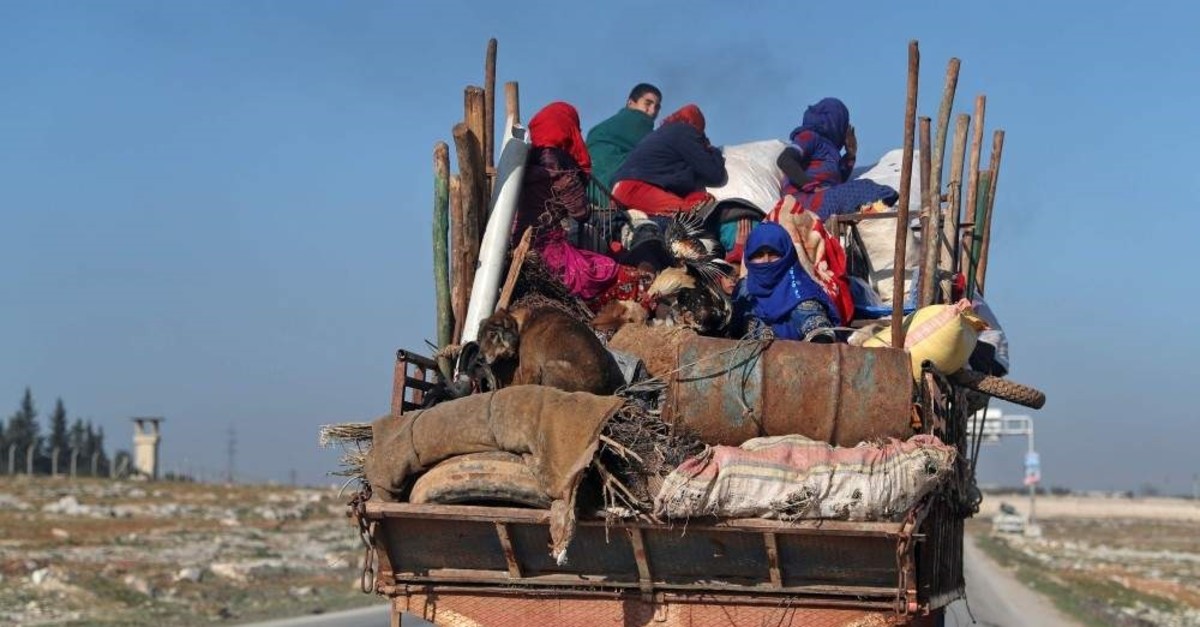 Displaced Syrians drive with their belongings as they flee airstrikes in Urum al-Sughra town in Syria's northwestern Aleppo province, Jan. 22, 2020. (AFP PHOTO)
by daily sabah Jan 23, 2020 4:44 pm
While the international community is deadlocked over a solution to the civil war in Syria, the suffering of civilians in the country continues with no hope for peace in sight. Recounting their experiences of sorrow, pain and burden during past eight years, one family in Syria has shared their personal story, giving a face to the many innocent civilians whose lives have been destroyed by the conflict.

As reported in the Yeni Şafak daily, prior to the civil war, the Makda family resided in the el-Kadem district of Damascus, where they stayed for a while despite attacks by the Bashar al-Assad regime. For as long as they could stand, they struggled through hunger, poverty and aerial bombardments. Yet, eventually, as part of an agreement struck between opposition forces and the Assad regime, they were made to leave their hometown for the eastern Ghouta region where even more challenges lay in store for the family. They were then settled in Afrin, a northwestern province that was liberated from terrorist forces by the Turkish Armed Forces (TSK) and the Syrian National Army (SNA) on March 18, 2018.

Turkey carried out three cross-border operations west of the Euphrates River: Operation Euphrates Shield and Operation Olive Branch, in January 2018 and Operation Peace Spring in October 2019 to drive terrorist groups, including the YPG/PKK and Daesh, from its borders.

The father in the family, Nidal Makda, found a job in a tomography center. For a while, things seemed to be looking up; however, the Makda family's misfortunes were far from over. On the anniversary of the Olive Branch Operation on Jan. 20, a PKK missile launched from the northeastern province of Tal Rifaat hit their home, landing one of the walls of the house and injured his wife, Tufra Makda, and their three children. Tufra, who was nine months pregnant, and the couple's 2-year-old son, Mohammed Brai, died at the scene from their injuries.

Doctors tried to revive the baby, but the child died from a lack of oxygen.

The Makda family is just one of countless families suffering the worst effects of the Syrian civil war, which has forced more than 5 million people to flee the country, while more than 7 million have been internally displaced.

Suffering and civilian casualties increase everyday in Syria, while the uncertainty in the region continues.

Several measures have been taken to try to end to the conflict, but so far none have come close to brokering peace.

The Astana peace process – seeking to end the Syrian conflict – was launched in January 2017 under the initiative of Turkey, Russia and Iran. To date, a total of 13 rounds have been held in Astana, Kazakhstan.

The most recent attempt, the Syrian Constitutional Committee, which was seen as a historic step toward peace in Syria and has received support from the international community, is to be made of 150 members, with 50 regime delegates, 50 opposition members and 50 civil society members chosen by the U.N. envoy to Syria.

The launch of a process for a new constitution and the formation of the committee started at a conference in Russia in January 2018. However, the parties failed to reach an agreement due to a decision by the Assad regime to walk out on the first day of the second round of talks.
RELATED TOPICS