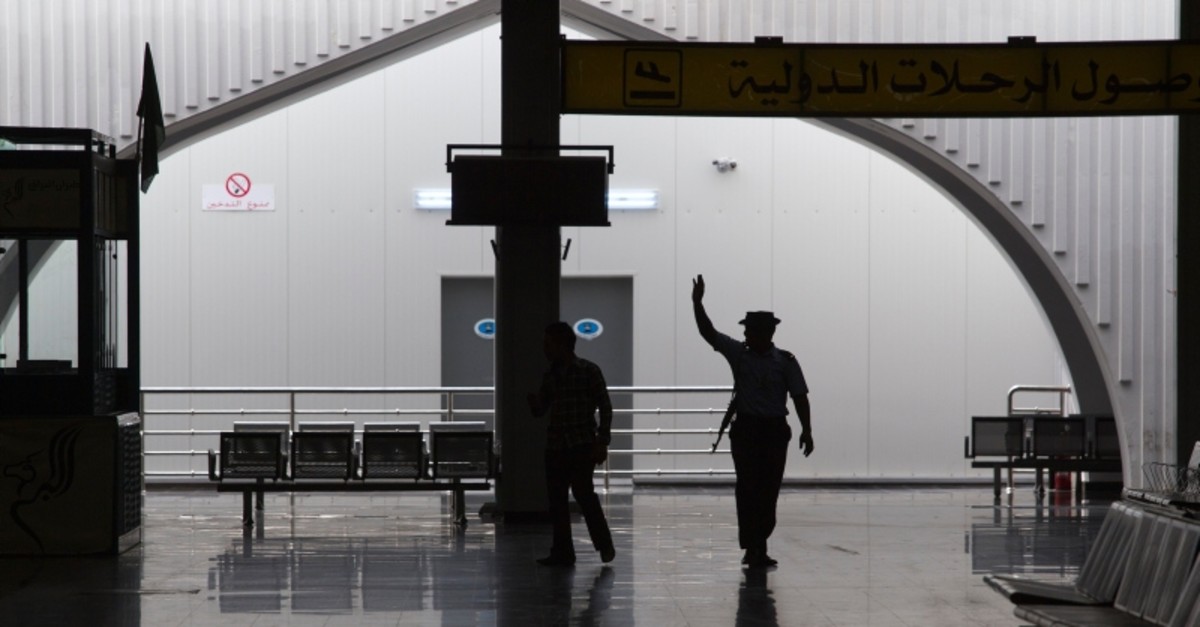 In this Aug. 20, 2011, file photo taken on a government-organized tour, a guard waves to fellow officers in the main lobby of the international airport in Tripoli, Libya. (AP Photo)
by Daily Sabah with Agencies Jan 23, 2020 2:04 am

The Libyan capital's only operational airport has closed again after threats by forces loyal to putschist General Khalifa Haftar, dealing another setback to peace efforts as regional foreign ministers prepare to meet in Algeria Thursday.

Authorities at Tripoli's Mitiga airport said six Grad missiles crashed into the tarmac, prompting the airport to briefly suspend a number of flights and divert others to a northwestern city. However, there were no reports of damage or casualties from the shells. Just over an hour later, flights resumed.

"Any military or civilian aircraft, regardless of its affiliation, flying over the capital will be destroyed," warned Haftar's spokesman Ahmad al-Mesmari, adding that such flights would be considered a violation of a ceasefire in place since Jan. 12. Striking a harsh tone, he warned that Haftar's forces would not hesitate to bomb militia targets at the airbase.

As the sole landing strip for the U.N.-backed government based in Tripoli, as well as its major military base, Mitiga is a strategic target for opposition forces based in the country's east.

Although it was not immediately clear where the attack originated from, a spokesman for Haftar's eastern-based forces acknowledged shooting down a Turkish-made drone over Mitiga. Haftar's forces, known as the self-styled Libyan Arab Armed Forces, alleged the unmanned drone had violated the cease-fire and tried to strike LAAF targets in the capital.

The LAAF has been laying siege to Tripoli for months in a bid to wrest authority from the rival western government. Turkey provides the embattled U.N.-backed administration with major military support and recently deployed troops to help.

A pro-Haftar news outlet shared footage of dozens of people crowding around to inspect the wreckage of the drone. One of its large shattered pieces bore the Libyan flag.

The sudden shelling in Mitiga put a cease-fire brokered earlier this month by Russia and Turkey on shaky ground as diplomatic efforts to halt the long-running civil war intensify. Although both sides announced they would halt operations, intermittent clashes continue to rattle residents on the outskirts of Tripoli.

On Sunday, world powers with interests in the oil-rich country convened at a peace summit in Berlin, where they pledged to halt foreign interference and honor a widely violated arms embargo.

The peace push followed a surge in Haftar's offensive on Tripoli, which has threatened to plunge Libya into chaos rivaling the 2011 conflict that ousted and killed longtime dictator Moammar Gadhafi.

The foreign ministers of Libya's neighboring countries are set to meet in Algeria on Thursday for discussions on "rapidly-changing developments" following the Berlin conference, according to Egypt's Foreign Ministry.

Haftar's forces, which control the east and much of the south, receive support from the United Arab Emirates and Egypt, as well as France and Russia.

The Tripoli-based government is backed by Turkey, and to a lesser degree Qatar and Italy.