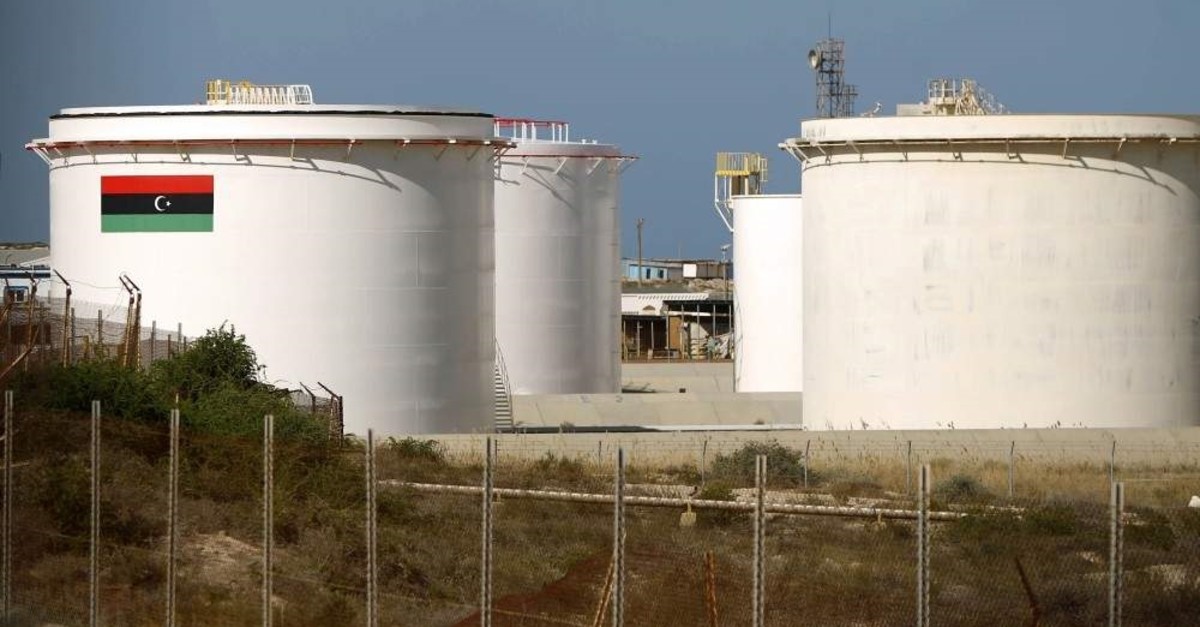 (FILES) This file photo taken on Jan. 12, 2017, shows a general view of an oil facility in the northern oil-rich Libyan town of al-Buraqah. Libya's oil production has plunged by around three-quarters since forces loyal to military strongman Khalifa Haftar launched a blockade a week ago, the National Oil Company announced. (AFP Photo)
by Daily Sabah Jan 26, 2020 1:36 pm

Al-Madani told Anadolu Agency that the Abu Qurain area, which is 140 kilometers southeast of Misrata, is still under GNA control even though shellings target civilian settlements.

Haftar's forces shelled Tripoli, Mohamed Gnounou, a military spokesman for the GNA said Sunday, adding that the militia is trying to advance to the area of Abugrein, located east of Misrata.
"With the enemy's repeated violations of the cease-fire, the foe is rendering the cease-fire useless," Gnounou added in a statement posted online in Arabic. He did not give casualty figures.

Haftar militias also killed one civilian of Moroccan origin and injured five Libyans Saturday in an attack on the surroundings of the capital’s only operational airport, Mitiga, using Grad missiles, according to a statement on Saturday from the head of Operation Burkan al-Ghadab launched by Libya's U.N.-recognized government.

On the other side, a passenger plane that was scheduled to land at Mitiga Airport had to change course due to the missile attack on Saturday. The airport has been hit multiple times since the start of a monthslong offensive by militias led by eastern-based Haftar to seize Tripoli from the U.N.-recognized GNA and has been closed and reopened on several occasions.

Apart from the casualties near Mitiga, two further civilians were injured near the Safwa hospital in the country’s south as a result of Haftar militias’ bombardments.

On Jan. 12, the conflict parties announced a cease-fire in response to a joint call by the Turkish and Russian leaders. But the talks for a permanent cease-fire deal ended without an agreement after Haftar left Moscow without signing the deal. Similarly, an attempt of the international community to find a solution to the Libyan crisis in the German capital Berlin on Jan.19 remained inconclusive. Since then, attacks of Haftar’s forces have been continuously going on without regard to civilians.

Several countries have violated an arms embargo in Libya which they had agreed to uphold at an international summit in Berlin last week, the United Nations said on Saturday.

The participants at last Sunday's summit agreed to uphold a U.N. arms embargo and end military support for the country's warring factions.

"Over the last 10 days, numerous cargo and other flights have been observed landing at Libyan airports in the western and eastern parts of the country, providing the parties with advanced weapons, armored vehicles, advisers and fighters," the United Nations Support Mission in Libya (UNSMIL) said in a statement that did not specify which countries had breached the embargo.

Since the ousting of late ruler Moammar Gadhafi in 2011, two seats of power have emerged in Libya: One in eastern Libya supported mainly by Egypt and the UAE, and the other in Tripoli, which enjoys U.N. and international recognition. The GNA led by Sarraj has been under attack since April from Haftar's forces, with fighting killing over 280 civilians and 2,000 fighters.Libya's oil output down 75%

Meanwhile, Libya's oil production has plunged by around three-quarters since forces loyal to Haftar launched a blockade a week ago, the National Oil Corporation (NOC) announced Saturday.

The fall, from 1.2 million barrels per day to just over 320,000, has caused estimated losses of $256 million since the closure of major oil fields and ports in the east and south of the country, the NOC said in a statement.

Haftar's forces blockaded the main oil terminals in eastern Libya the day before the summit in Berlin that called for the end of foreign interference in the conflict and a resumption of the peace process. Exports were suspended at the ports of Brega, Ras Lanouf, Al-Sidra, Al-Hariga and Zweitina in the country's "oil crescent," the conduit for the majority of Libya's crude exports.

The corporation made assurances that "fuel is still available in most regions" of Libya, but called for an end to the blockades "to ensure the continuing supply of fuel products to all regions and to restore vital revenues to the Libyan economy."

The embassies of the U.S. and the U.K. as well as the European Union delegation in Libya called this week for the "immediate resumption" of NOC operations, warning of the risks of exacerbating the humanitarian situation in the country.

“We urge all parties to ensure the NOC is able to fulfill its vital mandate unimpeded on behalf of all Libyans. We recall the need to respect and safeguard the integrity, unity and lawful governance of the NOC as Libya’s sole independent and legitimate oil company,” the EU said in a statement last Wednesday.