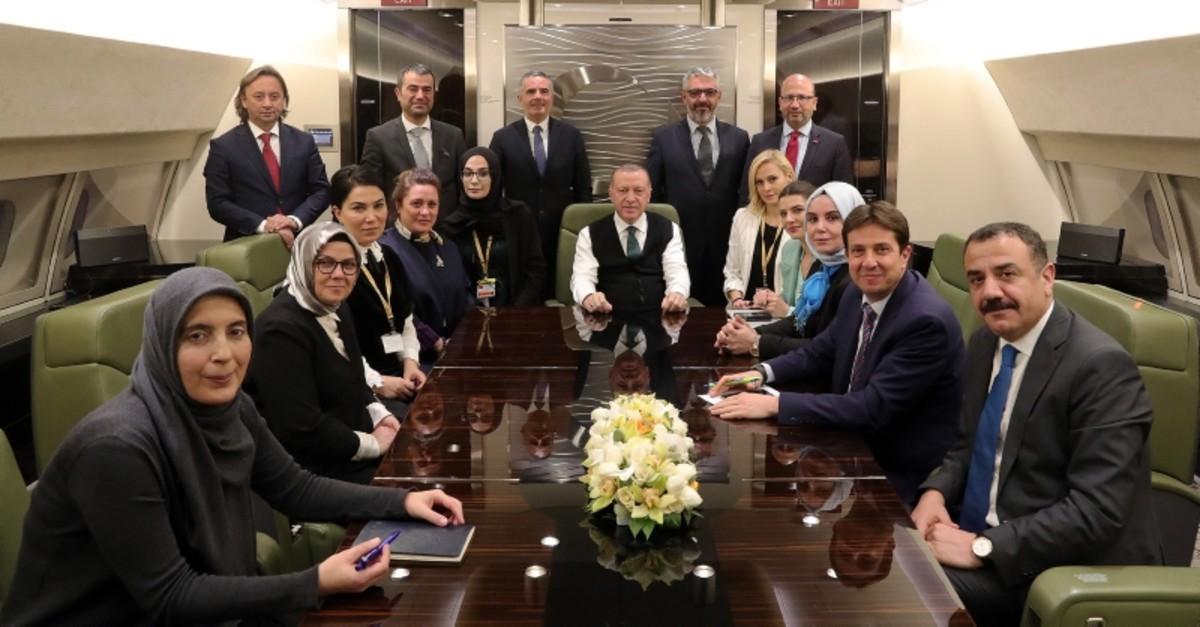 The ceaseless bombardment on civilian areas that has spurred a mass exodus from Idlib violates bilateral agreements with Russia, President Erdoğan says

Ankara’s patience regarding continuous attacks by the Bashar Assad regime in northwestern Syria’s Idlib province is running out, President Recep Tayyip Erdoğan said Wednesday, adding that Turkey would take a new stance in the face of its interlocutors' failure to abide by the Astana and Sochi agreements.

“Unfortunately, Russia hasn't abided by either the Astana or Sochi agreements. We have waited until now, but from this point, we are going to take our own actions. This is not a threat, but our expectation is that Russia will give the regime the necessary warning,” Erdoğan told journalists accompanying him on the return from his three-country visit in Africa.

Ankara has previously pushed for a diplomatic solution over Idlib bilaterally with Russia, resulting in the Sochi deal struck in September 2018, and trilaterally with Russia and Iran with the Astana agreement struck the following year. However, despite these deals, the regime – together with Russia – has continued a brutal offensive on Idlib in recent months, which by December had displaced around 358,000 people according to U.N. figures. Turkey, already the host to nearly 4 million refugees, has announced that it would not allow fresh waves of refugees to arrive from northern Syria. Despite the warnings, however, the offensive continues, as regime forces on Tuesday entered Maarat al-Numan, a town with symbolic and strategic importance. In light of the latest developments, the Turkish Defense Ministry said Tuesday that Turkey would not hesitate to retaliate if its observation points were threatened as Syrian regime forces advance through Idlib.

“If we are loyal partners, Russia should behave accordingly. It will continue the process with Syria differently or it will continue the process with Turkey differently; there is no other way,” Erdoğan said, adding: “Russia tells us they fight against terrorism. Who are terrorists? The people fighting to defend their own lands?”
In areas north of Maaret al-Numan, bombardments by regime ally Russia have prompted a fresh wave of refugees to emerge in recent days, with hundreds of vehicles packing a key exit route toward areas near the border with Turkey, according to the U.K.-based Syrian Observatory for Human Rights. Most have fled the town of Saraqib and the Jabal al-Zawiya regions, both located north of Maaret al-Numan. Russia has bombed areas around the main exit routes, despite the heavy outflow of civilians, the Observatory added.

Regarding the matter of the PKK having released Daesh fighters in exchange for cash, the president said: "We told the international community in this matter that they always defamed Turkey. What did we do? As the most important step, we eliminated 3,000 Daesh members in al-Bab. We brought peace to this place. We did the same in Jarablus (in northern Syria). Now we are capturing Daesh members and sending them back to their countries.”

Explaining that these Daesh members included those of German, Italian and French origin, Erdoğan highlighted Turkey's success in catching high-ranking members of the terrorist group. “We caught al-Baghdadi's sister, son-in-law and uncle,” he said.

The YPG, the PKK’s Syrian affiliate which has been weakened by Turkey's operations, has freed some of the 50 high-ranking Daesh fighters in a prison in eastern Syria’s Raqqa in return for bribes, releasing group members at the Turkish border, security sources say.

As part of its fight against Daesh, Turkey has deported more than 5,000 Daesh suspects and 3,290 foreign terrorists from 95 different countries in recent years while dismantling terror cells and safe houses providing logistical assistance to the terrorist group in Syria and Iraq or plotting attacks inside the country.

“Unfortunately, this is an obvious and clear indicator of the game the world played regarding Daesh. The prisons mentioned do not look like prisons. They are like open-air prisons,” he said.

He further elaborated that U.S. President Donald Trump had asked Turkey to take in the terrorists who had been released, upon which he said that the issue must be negotiated over. “We said that our ministers should discuss this, but there was no follow-up,” he added.

When asked about a campaign targeting Turkey’s security bureaucracy by Israel’s far-right media pointing to chief of the country's National Intelligence Agency (MIT) Hakan Fidan as the “next target” after key Iranian Gen. Qassem Soleimani, the president said: “News that the Israeli media are targeting the head of the MIT proves that we are going in the right direction.”

Israeli daily Makor Rishon, known for its favorable coverage of Prime Minister Benjamin Netanyahu, published a libelous article against Turkey's spy chief Tuesday, implying that he is next in line after the assassination of Soleimani. The article by Pazit Rabin with the headline "Sultan and Soleimani" resorted to mud-slinging attacks against Fidan.
Domestic tech expedites anti-terror fight

Emphasizing that Turkey had made a significant leap forward in terms of its national defense capabilities and domestic production in the sector, Erdoğan said recent developments had facilitated Ankara’s fight against terrorist groups.

“The U.S. did not sell us unmanned aerial vehicles (UAVs). We bought 10 from Israel in that time. However, Israel procrastinated every time regarding the maintenance or repair of the devices. This forced us to produce our own domestically manufactured UAVs and armed drones,” the president said, adding that this also helped Turkey decrease costs significantly.

In recent years, the Turkish defense industry made many innovative engineering moves in domestically developed military equipment and combat vehicles in almost all fields of warfare, most notably the Altay Main Battle Tank, the ATAK T-129 Tactical Attack and Reconnaissance Helicopter and the ANKA unmanned aerial vehicle, as well as other air and land platforms developed by Turkey's leading private defense companies, primarily the TB2 Bayraktar developed and manufactured by Baykar Makina.

The president also noted that the S-400 is a done deal and turning back from the agreement would not be an option, adding that Turkey would look for other markets or would produce its own domestically manufactured jets in case the U.S. continues dragging its feet on the F-35 issue.

“They will give us either our jets or our money,” Erdoğan said.
5 million Algerians killed by France
Reporting that Algerian President Abdelmadjid Tebboune had informed him 5 million Algerians were killed by France over a period of 130 years, Erdoğan said the number was far more than previous estimations.
“I told him that we would be glad if you sent us documentation. Of course, France did not make this slaughter only in Algeria but also in Rwanda. Many northern African countries had suffered from such extermination of France. It is only (French President Emmanuel) Macron who doesn’t know about it. When I tell him, he always says, ‘Are we giving history lessons?’” Erdoğan said.
Turkish officials often criticize Macron over his declaration of April 24 a national day commemorating events that occurred in 1915 recognized as a genocide by Armenia, saying that Macron needs to face up to the crimes committed by his country throughout the world.
Erdoğan previously noted France's colonization of numerous countries to exploit their wealth and resources and change their religions and languages, as in the case of Guinea, Benin, Mauritania, Burkina Faso, Chad, Cameroon, Djibouti, Algeria and Rwanda. French atrocities were not confined to Africa, however, with over 500,000 people slaughtered by the French in Vietnam between 1872 and 1954.