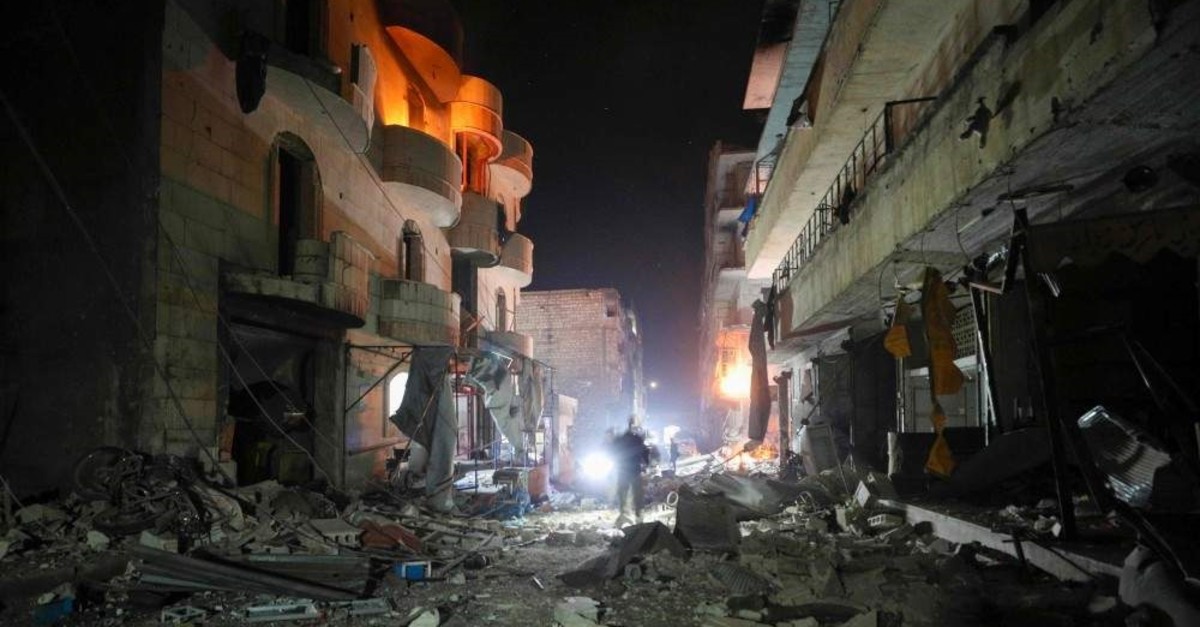 Ten civilians were killed when Russian fighter jets attacked a hospital and bakery in Syria’s northwestern Idlib province amid a surge in violence in the de-escalation zone. While the attacks rendered the hospital unusable, 37 more civilians were injured.

“Al-Shami Hospital and a bakery in #Ariha City in #Idlib countryside were bombed after midnight by Russian warplanes causing a large number of casualties among civilians and medical personnel,” the White Helmets civil defense group wrote late Wednesday on Twitter.

According to the opposition’s observatory, Russian fighter jets targeted several places in the town of Ariha. As civil defense groups sent injured civilians to surrounding hospitals, efforts for search and rescue activities continued. It is said that the number of dead could rise.
Hours later, Assad forces gravitated toward the Saraqib district, following the seizure of the Maarat al-Numan district. Within this scope, Assad forces have seized six additional settlements in Idlib's southeast with the assistance of Russian air support. Reportedly, intense clashes were going on in rural southeast Idlib and Aleppo's west and south between the Syrian regime's forces and those of the opposition. Syrian regime forces are 10 kilometers south of the Seraqib district, following the latest assaults. Yet, opposition forces were able to take back an area seized by the Assad regime west of rural Aleppo.

On the other side, Mark Lowcock, under-secretary-general for humanitarian affairs and emergency relief coordinator, alerted the U.N. Security Council (UNSC) Wednesday during a briefing on the humanitarian disaster unfolding in the country. “People in Idlib feel increasingly under siege: Bombardment follows them from place to place. They are traumatized and feel totally abandoned by the world. Unless the current hostilities stop, we will see an even greater humanitarian catastrophe,” Lowcock said. His statements came after forces loyal to Assad seized a key district in the Idlib de-escalation zone, causing more people to be displaced.

Underlining that the deteriorating humanitarian situation affects women and children, in particular, the relief coordinator warned that hostilities have escalated in recent days in the Idlib area, especially around Maarat al-Numan, Saraqib and western Aleppo. “The fighting in these areas appears to be more intense than anything we have seen in the last year,” he added.

Overall in the week of Jan.15 to Jan. 23, the United Nations Human Rights Council (OHCHR) documented incidents in which at least 81 civilians, most of them women and children, were killed as a result of airstrikes and ground-based strikes. This total is in addition to the more than 1,500 civilian deaths that OHCHR has verified since the escalation began in late April.

Lowcock further explained that according to assessments at least 20,000 people have moved in the last two days while some 115,000 have left in the past week and nearly 390,000 have fled in the past two months.

Heavy clashes broke out between opposition and regime forces in Maarat al-Numan after the troops entered the town south of Idlib, the Syrian Observatory for Human Rights said after earlier reporting that the troops backed by Russian airstrikes had taken full control of the area. As sources on the ground reported, Maaret al-Numan has become like a ghost town.

Indicating that the most urgent need is to protect civilians and to scale up the humanitarian response, Lowcock said, “In order for that to be possible, I call on all parties to facilitate safe and unhindered access for humanitarian workers and supplies to address civilians’ essential needs.”

Chief-of-General Staff Yaşar Güler, had a phone call with his Russian counterpart Valery Gerasimov Thursday regarding the developments in Idlib.
President Recep Tayyip Erdoğan, on the other hand, stated Wednesday that Ankara’s patience for the Assad regime’s continuous attacks is running out.

“Unfortunately, Russia hasn't abided by either the Astana or Sochi agreements. We have waited until now, but from this point, we are going to take our own actions. This is not a threat, but our expectation is that Russia will give the regime the necessary warning,” Erdoğan told journalists accompanying him on the return from his three-country visit in Africa.

Regime forces, which currently control around 70% of Syria, have repeatedly vowed to recapture the entire country, including Idlib and its environs. Syria's war has killed more than 380,000 people and displaced more than half of the country's population since its start in 2011 with the brutal repression of anti-regime protests.

In September 2018, Turkey and Russia agreed to turn Idlib into a de-escalation zone in which acts of aggression are expressly prohibited. But more than 1,300 civilians have been killed in attacks by the regime and Russian forces in the zone since then as the cease-fire continues to be violated. In a fresh move, Turkey and Russia announced on Jan. 10 that a new cease-fire in Idlib would start just after midnight on Jan.12. However, the regime and Iranian-backed terrorist groups have continued their ground attacks. The renewed assault came despite the Jan.12 cease-fire deal between Turkey and Russia, which backed the opposing sides of the conflict. The escalation has also sparked concern from Turkey which operates 12 observation posts in Idlib under a September 2018 deal with Russia that aimed to prevent an onslaught in the province.
The National Security Council of Turkey released a statement yesterday regarding developments in Idlib, saying it will take additional measures to try to stop regime attacks.
UNSC clashes over border crossings

UNSC members during the briefing discussed border crossings that enable the transfer of humanitarian needs to war-torn Syria’s civilians in need. While Lowcock warned that medical supplies were unable to reach the needy, the United Kingdom and the United States accused Russia and China of cutting off the only lifeline for millions of Syrians. China, in return, said that its critics were politicizing aid.

As of Wednesday, 400,000 medical items were stuck on trucks in Iraq, where a crossing point was closed, Lowcock said.

Since 2014, the UNSC has sent aid through four border crossings – Bab al-Salam and Bab al-Hawa in Turkey, al-Yarubiyah in Iraq and al-Ramtha in Jordan. According to the U.N., around 30,000 U.N. aid trucks have gone into Syria through the crossings since the operation began.

Yet on Jan.10, with 11 votes in favor, 0 against, and with four of its permanent members abstaining – China, Russia, the U.K., and the U.S – the security council re-authorized only two of the four existing border crossings for a period of six months instead of 12, namely Bab al-Salam and Bab al-Hawa in Turkey.

Turkey has even said there should be a fifth border gate to the northern Syrian province of Tal Abyad, to increase the capacity of humanitarian aid to Syria. Russia, however, has opposed the idea, suggesting to decrease the number of border gates to just two.