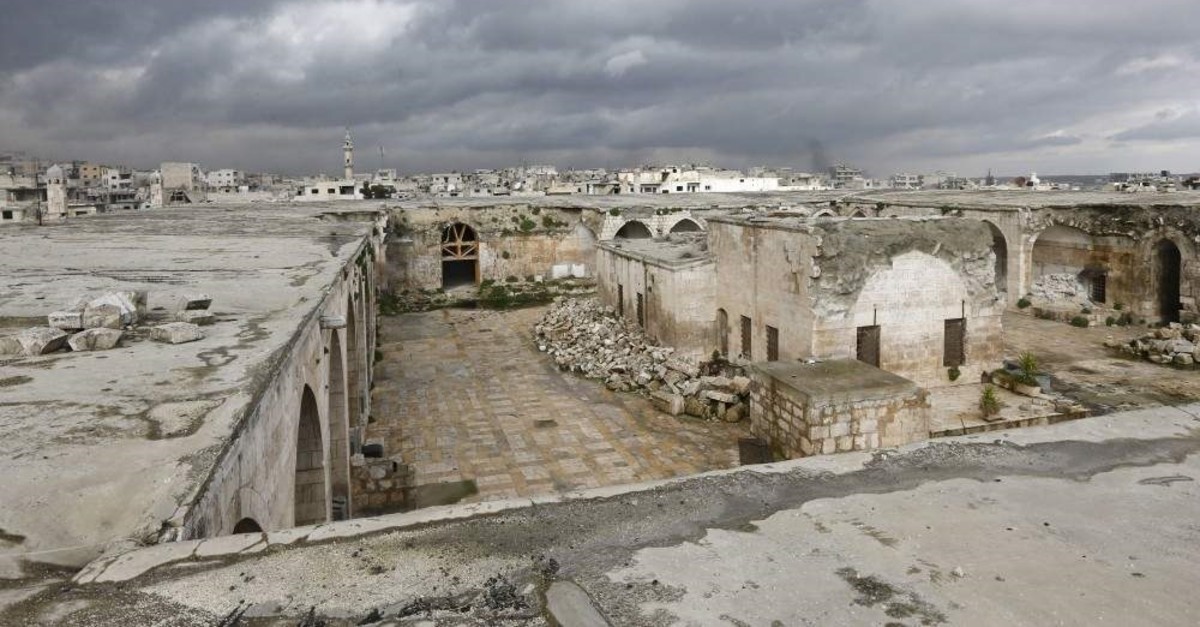 A view of the museum of Maaret al-Numan in Syria's northwestern Idlib province on Jan. 30, 2020. Maaret al-Numan is nestled in a UNESCO-listed region of ancient villages and its mosaics museum had achieved international renown.The museum, housed in an Ottoman-era caravanserai, was seriously damaged in a government barrel bomb attack in 2015. (AFP Photo)
by Daily Sabah with AA Feb 03, 2020 4:16 pm
The ongoing attacks by the Bashar Assad regime in Syria and its allies forced some 151,000 civilians to flee their homes in Idlib, a de-escalation zone in northwestern Syria, over the last week, according to sources on the ground.

Mohammad Hallaj, director of Syria's Response Coordination Group, said the forced migration gained momentum in the Eriha, Jabal Zawiya and Saraqib regions of Idlib due to intensified attacks targeting residential places and civilians. The attacks by the regime forces, Iranian-backed terror groups and Russian strikes are the main reasons behind the forced migration.

In their efforts to capture the last strong opposition bastion, Assad regime forces, backed by Russian air support, made rapid advances in Idlib last week, capturing the town of Maarat al-Numan, located about 100 kilometers southwest of al-Bab. The district lies on the M5 highway linking Damascus to Syria's second city Aleppo, the main artery coveted by the regime as it tries to rekindle a moribund economy.

In areas north of Maaret al-Numan, bombardments by regime ally Russia have prompted a fresh wave of refugees in recent days, with hundreds of vehicles filling a key exit route toward areas near the border with Turkey, according to the U.K.-based Syrian Observatory for Human Rights (SOHR). Most have fled the town of Saraqib and the Jabal al-Zawiya regions, both located north of Maaret al-Numan. Russia has bombed areas around the main exit routes, despite the heavy outflow of civilians, the observatory added.

The majority of the displaced arrived at the camps near the Turkish border, while some others took refuge in the areas cleared of terror elements following Turkey's military campaigns.

Since 2016, Turkey has launched a trio of successful anti-terrorist operations across its border into northern Syria to prevent the formation of a terror corridor: Operations Euphrates Shield in 2016, Olive Branch in 2018 and Peace Spring in October 2019.

With the latest displacements, the number of people displaced from Idlib and Aleppo since November 2019 has amounted to 692,000. Despite number variations from various sources, between 400,000 and 700,000 civilians have left their homes and found shelter near Turkey's southern border. U.S. special envoy for Syria James Jeffrey said Thursday that some 700,000 people had fled toward the Turkish border, raising the specter of an international crisis.

According to German charity institution Welthungerhilfe, between Dec. 1 and Jan. 29, some 520,000 had already fled from Idlib. Speaking to Deutsche Welle, the Syria director of the charity, Halil Kurt, said the migrants are in a dire humanitarian situation. "Some 73% of those people need urgent food aid," Kurt said.

The displaced civilians are facing great difficulty in finding places to take shelter as refugee camps are overcrowded and lack essential infrastructure. Thousands of families are in dire need of humanitarian aid as they struggle to live in harsh winter conditions.

Turkey, already host to nearly 4 million refugees, recently announced that it will not accept fresh waves of refugees from northern Syria. Despite the warnings, however, the regime's offensive continued Sunday with the capture of six more villages in southern Idlib. During recent airstrikes by the regime and Russia in Idlib, nine civilians were killed, the SOHR reported. It said seven of those killed were all members of one family in the town of Sarmeen.

In September 2018, Turkey and Russia agreed to turn Idlib into a de-escalation zone in which acts of aggression are expressly prohibited; however, more than 1,300 civilians have been killed in attacks by the regime and Russian forces in the de-escalation zone since then as the cease-fire continues to be violated.

In a fresh move, Turkey announced on Jan. 10 that a new cease-fire in Idlib would start just after midnight on Jan. 12. However, the regime and Iran-backed terrorist groups continued their attacks.

More than 1 million Syrians have moved near the Turkish border due to intense attacks over the last year.

Last week, President Recep Tayyip Erdoğan said Ankara's patience for continuous attacks by the Assad regime in Idlib province is running out, adding that Turkey would take a new stance in the face of its interlocutors' failure to abide by the Astana and Sochi agreements.

"Unfortunately, Russia hasn't abided by either the Astana or Sochi agreements. We have waited until now but from this point, we are going to take our own action. This is not a threat, but our expectation is that Russia will give the regime the necessary warning," he said.

Idlib and the area north of Aleppo form part of the last major opposition-held territory in Syria, where Assad has taken back most of the ground once held by his enemies with Russian and Iranian support.

Turkey, which already hosts 3.7 million refugees from Syria, fears a fresh wave of migrants from Idlib. It has 12 military observation posts around Idlib, set up under a 2017 agreement with Russia and Iran, and several of them have since been surrounded by advancing Syrian regime forces.
RELATED TOPICS