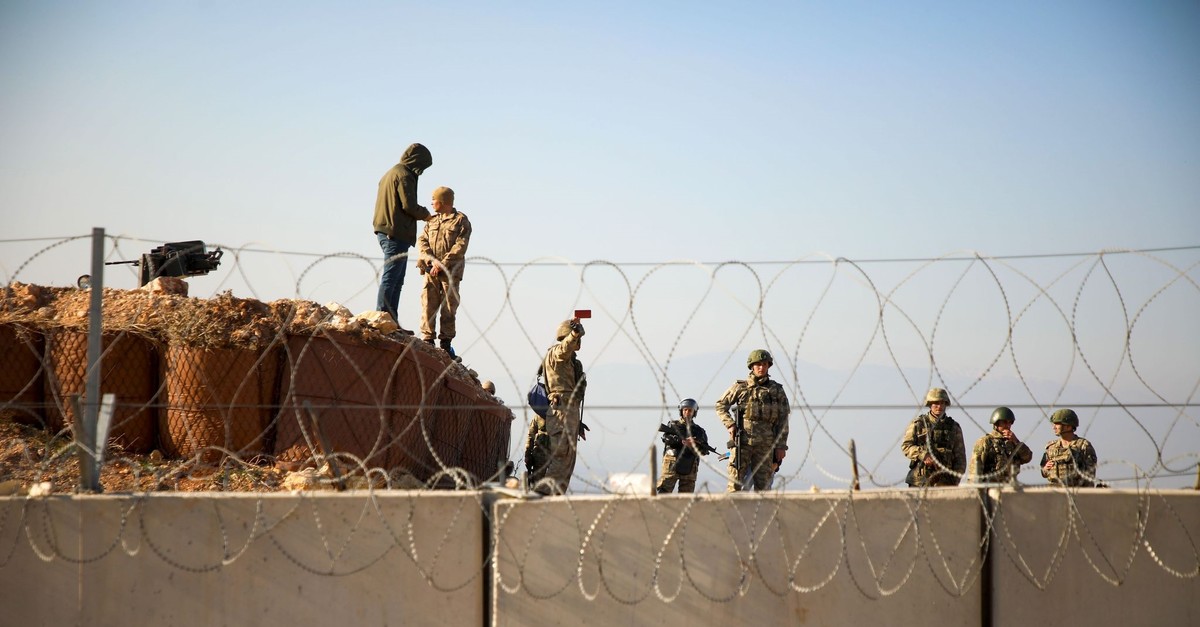 Turkish soldiers gather near the border with Syria during a symbolic demonstration in the city of Harim in the northern countryside of Syria's Idlib on the border with Turkey on Jan. 2, 2020
by Daily Sabah Feb 03, 2020 8:17 am

The Turkish military retaliated against an attack by the Assad regime forces, in Syria's northwestern Idlib province, reports said Monday.

The military destroyed targets in the area, the ministry said in a statement.

Four Turkish soldiers were killed, nine others were injured in shelling by the Assad regime forces in the opposition-held province.

In a statement, Presidential Spokesman Ibrahim Kalın condemned the attack, saying that Turkey has given the necessary response to the attack, which violates the Idlib agreement.

Turkey had asked Russia previously for a cease-fire in December, sending a delegation led by Deputy Foreign Minister Sedat Önal to Moscow as attacks on the de-escalation zone intensified. The Idlib region has seen an increase in violence in recent months as forces loyal to the Assad regime, supported by Russian airstrikes, have launched a fresh assault to capture one of the largest urban centers in the area.

Earlier in August, Damascus scrapped a similar truce agreement only three days after it went into effect, accusing opposition forces and terrorists of targeting a Russian airbase. This move was not surprising since it was already reported by the White Helmets civil defense group during the cease-fire period that at least one civilian had been killed and five had been wounded in Idlib despite the announcement of a cease-fire when Turkey, Russia and Iran, the three guarantors of the Astana peace process, met at the 13th meeting held in Nur-Sultan, the capital of Kazakhstan. Later, toward the end of August, Assad regime ally Russia announced that the Damascus regime forces would observe a new cease-fire in Idlib. It said the truce aimed "to stabilize the situation" in Idlib but the army "reserves the right to respond to violations" by terrorists and allied opposition groups, it added. Yet again, the cease-fire was short-lived as a Russian airstrike was launched on a health facility in Aleppo's western countryside under the same pretexts, the Syrian Observatory for Human Rights (SOHR) reported only a few hours before the agreement was to go into effect.

The Assad regime has repeatedly vowed to take back Idlib, and bombardment has continued despite a cease-fire.

On Dec. 20, the regime and its allies launched a military campaign primarily in the cities of Maarat al-Numan and Saraqib as well as the surrounding rural areas, capturing 35 residential areas.