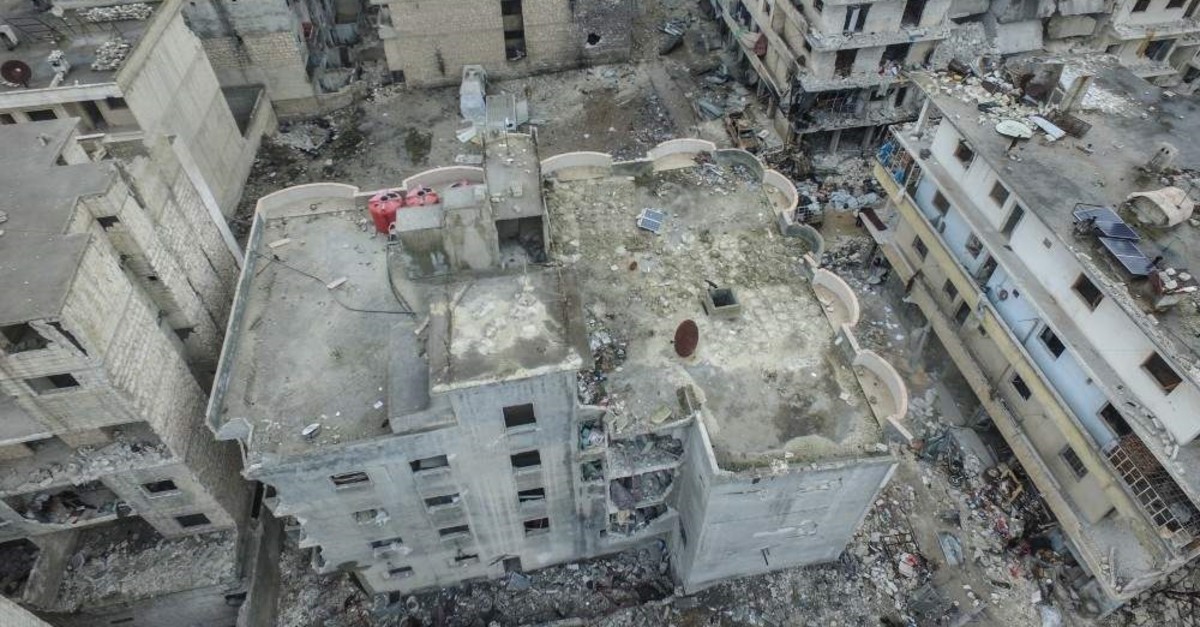 The Bashar Assad regime and its backer Russia have set their sights on delegitimizing Turkey's and the Syrian National Army's (SNA) presence in Syria with the help of the terrorist organization Hayat Tahrir al-Sham (HTS), high-level local sources stated while Russia is far from signaling to favor a political solution.

While Moscow is blaming Turkey for not being able to clear Idlib of terrorist elements, it tries to portray official SNA forces as terrorist groups. Sources indicated that Russia's stance in this regard arises from its desire for the Syrian regime to seize Idlib and using terrorists as leverage to dispose of opposition forces which are found in a large number in Idlib.

According to top-level local authorities speaking to Daily Sabah, the main target of the recent attack targeting Turkey and causing the death of seven Turkish soldiers and one civilian was to get hold of Syria's northwestern Idlib and for the Syrian regime to finally win international diplomatic recognition.

While the sources pointed out that Russia attempted to declare all opposition groups as "terrorists" and tried to divert the perception in this manner, they indicated that the HTS terrorist organization was used since 2015 not only in Idlib but also in Hama, Turkmen Mountain, Dara, Aleppo and Ghouta to rid these places of the opposition.

"The HTS is not a problem only Turkey or the National Army has to deal with. There are several countries and coalitions on the field. Why do they not struggle? In fact, the Assad regime and Russia are using the HTS as a pretext to eliminate the opposition just as Daesh was used," a high-level official elaborated. Information from local sources shows that HTS has been capturing territory in Idlib gradually since 2015. Also, the experts confirmed that the group controls over 70% of the İdlib province militarily.

The Sochi agreement was reached on Sept. 17, 2018, between Turkey and Russia. According to the agreement, the cease-fire in the Idlib region will be preserved, with the withdrawal of heavy arms and radicals from the region. Following eight months of relative calm provided by the deal, the Syrian regime intensified its attacks as of April 26, under the pretext of fighting HTS militants holed up in Idlib.

On his way back from a visit to Africa, President Recep Tayyip Erdoğan told journalists last week that preventing a new conflict and a new wave of mass migration from northwestern Syria's Idlib is crucial for Ankara and warned that the Astana and Sochi process is obsolete. Surprisingly, this attack came just after the statements and warnings of the president regarding the de-escalation zone.

The president added that Russia has not abided by the Sochi and Astana deals and signaled that Turkey may continue its operations if bombardments of civilian areas in Idlib do not stop.

Following Erdoğan's statements last week, sources on the ground confirmed the mobilization of the Turkey-backed SNA and new deployments by the Turkish army to the border areas. Due to its humanitarian and security concerns in Idlib, Ankara expects a positive step from Moscow on the issue. Despite the Assad regime, Russia and some other explicit and implicit actors on the ground dragging their feet to a political solution, Turkey still sees a military solution as the last resort.

Syrian sources on the field indicate that Russia and the Assad regime being disturbed by Turkey's and the SNA's presence in Turkey hinted at their unwillingness for a political solution and added that Turkey is still the biggest guarantor for a solution in the country.

Sources highlighting that the HTS seized all buildings and institutions belonging to the opposition's military and diplomatic representatives, saying that Nusra, Daesh and HTS were targeting the opposition, which facilitated the situation for the Assad regime. Accordingly, the Assad regime and Russia were trying to radicalize and display opposition forces as terrorists.

Furthermore, sources also said that the Assad regime released all of Nusra, Daesh and HTS militants while the leader of the Nusra terrorist organization was released by Assad.

"The Sochi deal with Russia definitely has to be updated. New conditions and a new deal are vital since, under these circumstances, it is hard to believe that Russia wants a political solution instead of a military one in Syria," they said.

On the other side, referring to the recent attack on Turkish soldiers, security and diplomatic sources said that Turkey's observation posts in the region have the task of defending themselves and retaliate against other forces.

Foreign Minister Mevlüt Çavuşoğlu also stated Tuesday that Turkey's observation points are there to report violations but that in the face of assaults, it is Ankara's right to reinforce these and to take the necessary measures.

Erdoğan Monday noted that Turkish F-16 fighter jets and howitzers continue to carry out attacks against regime targets in at least 40 points in Idlib.

Turkey has been an advocate for a political solution in Syria more than any other country including Russia, Iran and other international powers on the ground. The Idlib issue holds a very crucial place in Turkey's red lines.

Idlib, the last opposition enclave in Syria, had a prewar population of 1.5 million. The number swelled to around 3 million with new refugee waves after it was designated a "de-escalation zone" under the Astana agreement between Turkey, Russia and Iran in May 2017 that paved the way for a permanent political solution in Syria. The Turkish military set up 12 observation posts in Idlib's de-escalation zone after the ninth round of Astana-hosted peace talks.