Erdoğan: No need for conflict with Russia, Syrian regime has to stop 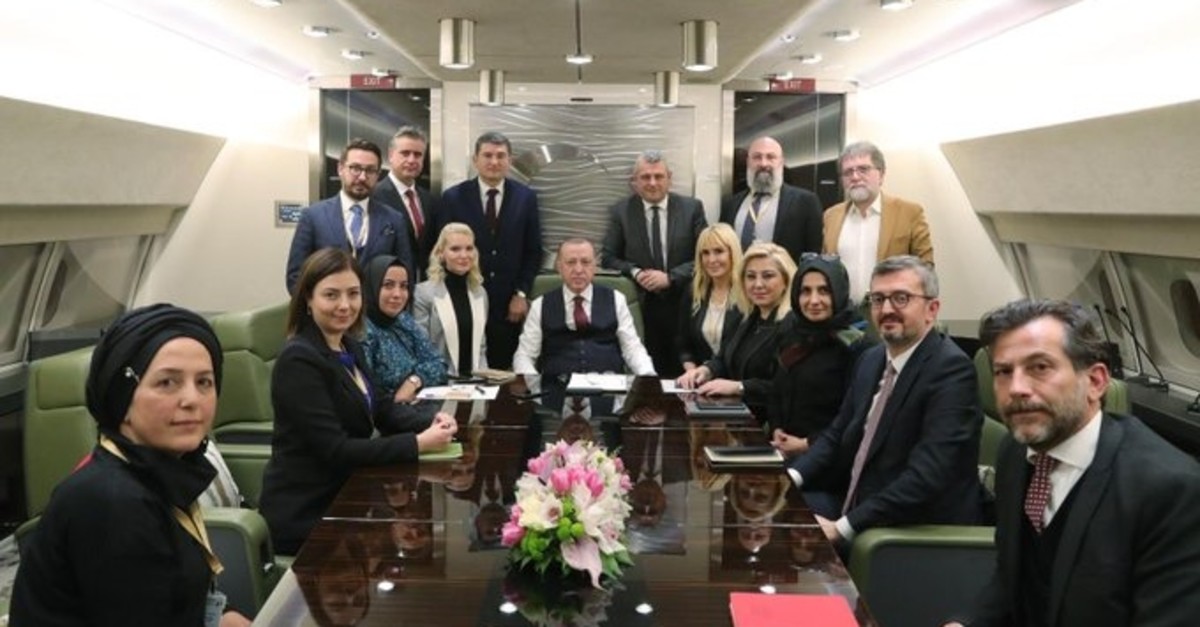 Although the strategic partnerships with Russia in various fields are too vital to be overlooked, the Syrian regime attacks toward Turkish military in Idlib cannot be ignored and needs to be stopped one way or another, President Recep Tayyip Erdoğan said

President Recep Tayyip Erdoğan said Tuesday that getting into a conflict or serious dispute with Russia was unnecessary at the moment.

"We will discuss everything, but not with anger," he added while reiterating that the Syrian regime needs to be stopped. He was talking to journalists on his way back from a daylong visit to neighboring Ukraine.

"We cannot overlook these (strategic partnerships with Russia). That is why we will sit down and discuss everything (with Russia). Not in anger since it would only bring harm," Erdoğan said.

The president's comments come after a Syrian regime attack killed seven Turkish soldiers and a civilian on Sunday night.

"It (the regime attack) is a clear violation of the Sochi deal," Erdoğan said, adding that the regime will pay for its actions.

"Of course there will be a cost for such actions for the (Syrian) regime. We have already said we will do whatever necessary from now on," the president said.

Erdoğan added that at least 76 regime soldiers have been neutralized, most of which were killed, while others were wounded.

"The Russian side was also informed (about the operation), including the coordinates," he said. "Russia also knows the fact that Turkey cannot tolerate any more conflict and civilian massacres in Idlib, nor a new refugee flow."

He said the Turkish military observation points in the region were vitally important for the region thus will remain in their current locations.

In response to a question on whether or not the Turkish response in Idlib will turn into a full-scale offensive like Operation Peace Spring, Erdoğan said the current activities were the first step toward an operation in Idlib.

In a fresh move, Turkey announced Jan. 10 that a new cease-fire in Idlib would start just after midnight on Jan. 12. However, the regime and Iran-backed terrorist groups continued their ground attacks.

According to the president, the Syrian regime is trying to gain an advantage in the region by forcing civilians to flee toward the Turkish border.

He said to stem the refugee flow, Turkey is building briquette houses for displaced civilians 30-40 kilometers from the Turkish border.

"It is not possible to solve this crisis with tent cities," he said, referring to the harsh winter conditions. He added that he has also informed German Chancellor Angela Merkel about the situation and with Germany's support, they are planning to build 25,000 briquette houses initially.

He called on the international community to assume more responsibility in Idlib. "It is not enough to appreciate Turkey's efforts. We need concrete steps."

The president said the international community, especially the European states and the U.S., have been constantly asking for information on Idlib while refusing to offer concrete support on the matter.

"They have yet to keep the promise made back in 2016," Erdoğan said, referring to the refugee deal with the EU according to which the union was supposed to provide 6 billion euros ($6.62 billion) to Turkey in return for the country keeping the refugees within its borders.

"They did not even pay the first 3 billion," said Erdoğan, adding that when EU heads are reminded of the matter, they respond that they are "working on it."

He added that when it comes to these matters, the EU and U.S. are not much different from one another.

As far as the crisis in Libya is concerned, Erdoğan said Turkey backs Fayez al-Sarraj, the chairman of the Presidential Council of the U.N.-recognized Government of National Accord (GNA).

"We believe we are on the rightful side in Libya," the president said. "The recent developments show that the wind is changing in favor of Turkey and al-Sarraj."

Criticizing Western powers like France for supporting the putschist Gen. Khalifa Haftar despite recognizing the GNA as the legitimate power in Libya, Erdoğan said Turkey finds this attitude of the West concerning.

He added that Turkey is closely following the latest military commission meetings between the two parties in Geneva.

"However, unfortunately, these (Haftar's forces) do not act sincerely," the president said, adding that he does not trust Haftar at all, despite the ongoing process and involvement of the U.N. to the issue.

Haftar has received material support from countries including the United Arab Emirates, Egypt, Jordan and Russia, U.N. experts and diplomats say, while the GNA is backed by Turkey.

About the recent developments in the Palestinian-Israeli crisis, Erdoğan said he is pleased to see that Palestinian authorities, including Mahmud Abbas and Hamas leader Ismail Haniyeh, are all determined to not hand over Jerusalem in the face of attempts from both the U.S. and Israel to annex the holy city.

"As far as the Jerusalem crisis is concerned, we will do whatever falls under our responsibility," the president said. "Most Western and European states also welcome Turkey's stance on the issue," he added.

On the condition of Crimea and Crimean Tatars, Erdoğan said Turkey's stance on the matter is clear: it does not recognize the annexation of Crimea.

"We do not recognize the annexation of Crimea. We are ready to do anything for our Crimean brothers," he said.

He added that the Ukrainian president was also clear on the issue and wanted to be informed on Turkey's perspective on the matter.

"(President) Volodymyr Zelensky even offered to establish a joint shelter project for Crimean people. We have welcomed the offer, and a 500 building project is on the way."

"We put a high value on the territorial integrity, political unity and stability of Ukraine and informed our Russian counterparts accordingly," he added.

Crimean Tatars are a Muslim community indigenous to the Black Sea peninsula. Most Crimean Tatars opposed Moscow's annexation of the peninsula in 2014 and subsequently Russian authorities have cracked down on the community, banning their assembly and television channel as well as detaining and jailing dozens of activists.