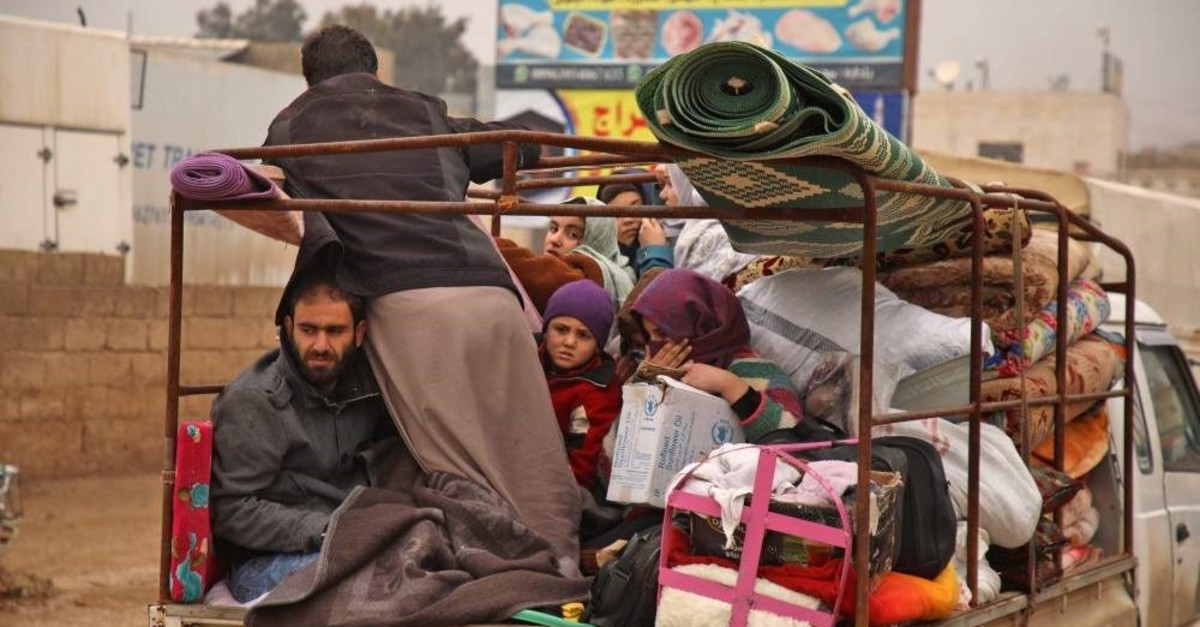 Amid a surge in violence spurring the exodus of tens of thousands of people from Syria’s northwestern Idlib province, the Bashar Assad regime and Russia have been targeting civilians trying to flee the conflict, head of the White Helmets civil defense group Raed al-Saleh stated.
In an exclusive interview with Daily Sabah, Saleh described the dire humanitarian situation in the region and the need for an urgent response to the assaults of the Assad regime and its backer Russia.
“Whole families are being bombed in their cars as they flee in search of safety while volunteers are striving to evacuate civilians,” Saleh said.
Saying that the situation in Idlib right now is “tragic” and that people leave their houses to areas near the border, Saleh added, “More than 1 million civilians from Idlib city and the surrounding areas face the terrifying threat of Assad and (Russian President Vladimir) Putin’s bombs as regime troops moved within 9 kilometers of the symbolic and densely-populated city.”
Areas controlled by the regime in Idlib and neighboring Aleppo have been increasing recently since the Syrian regime launched a renewed offensive on the de-escalation zone, vowing to take back the last opposition stronghold. Idlib had a prewar population of 1.5 million. The number swelled to around 3 million with new refugee waves after it was designated a "de-escalation zone" under the Astana agreement between Turkey, Russia and Iran in May 2017, yet now, as the Assad regime is set on capturing the city, civilians are once again on the run with nowhere to go.
“As the regime entered the strategic town of Saraqib on the major M5 highway, it started blocking some civilians as they tried to move north despite claims of three “humanitarian corridors” meant to provide safe passage for those fleeing the bombardment,” Saleh said, indicating that the so-called humanitarian corridors the Syrian regime had claimed to have opened, are bombed heavily on the front lines.
Syrian regime forces entered the strategic town of Saraqib in Idlib Wednesday, after seizing another vital town, Maarat al-Numan last week.
Both Maarat al-Numan and Saraqib lie on the key M5 highway connecting the capital Damascus to the second city Aleppo. The regime has been eyeing the road as it seeks to revive a moribund economy ravaged by almost nine years of war.
“The high cost of fuel makes leaving by car an unaffordable option for many fleeing Assad’s bombs, and volunteers, such as the White Helmets, are helping families by providing vehicles for evacuation,” he added.
The current escalation in conflict in northwestern Syria began in April 2019; however, the situation deteriorated in the past two months, with the U.N. and Turkey urging countries to react. Meanwhile, the international community has remained without a proper answer to the situation.
“In 2020, so far 241 civilians have been killed, including 71 children – more than two children killed every day. The White Helmets have rescued 592 people from the rubble of destroyed buildings this year alone,” Saleh said. A million people are preparing to flee the province while close to half a million people have fled their homes in northwest Syria since the beginning of December, leaving some towns almost empty of their residents, he explained.
“More than 1.5 million have been displaced since the beginning of the offensive in April last year, forced to flee to overcrowded camps and makeshift shelters across a shrinking geographic area between the Turkish border and the front line,” Saleh continued.
Health facilities, another target
As the situation on the ground is changing by the hour, another target of the Assad regime and its backers have been health facilities which are essential for the survival of the civilians living under constant bombardments.
“In the past 48 hours, three hospitals have been bombed by Russian warplanes – the Public Health Centre in Sarmin, Sarmin Hospital, and al-Nour hospital in Taftanaz,” al-Saleh said, indicating that this was only the most recent number of hospitals targeted.
More than 50 health facilities ceased operations amid mass displacement and hostilities in northwest Syria last month, the World Health Organization (WHO) announced.
“At least 53 health facilities had suspended services since Jan.1 due to insecurity, threats of attacks or the simple fact that entire areas have been deserted by civilians seeking refuge from violence and daily bombardments,” the WHO said further in a written statement.
The people in northwest Syria are facing a lack of basic needs including access to health assistance, food, shelter, water and a warm environment during winter conditions.
“What is striking about this escalation is that the enormous humanitarian needs are being largely ignored by the international media and governments. Northwest Syria represents one of the world’s most severe humanitarian crises, where civilians are suffering on an extraordinary level. Humanitarian agencies can only do so much. What we need is a renewed international commitment to bring an end to this protracted and devastating crisis,” Rick Brennan, regional emergency director of WHO, wrote in the statement.
Currently, an estimated 2.9 million people in Syria’s northwest are in need of health care.