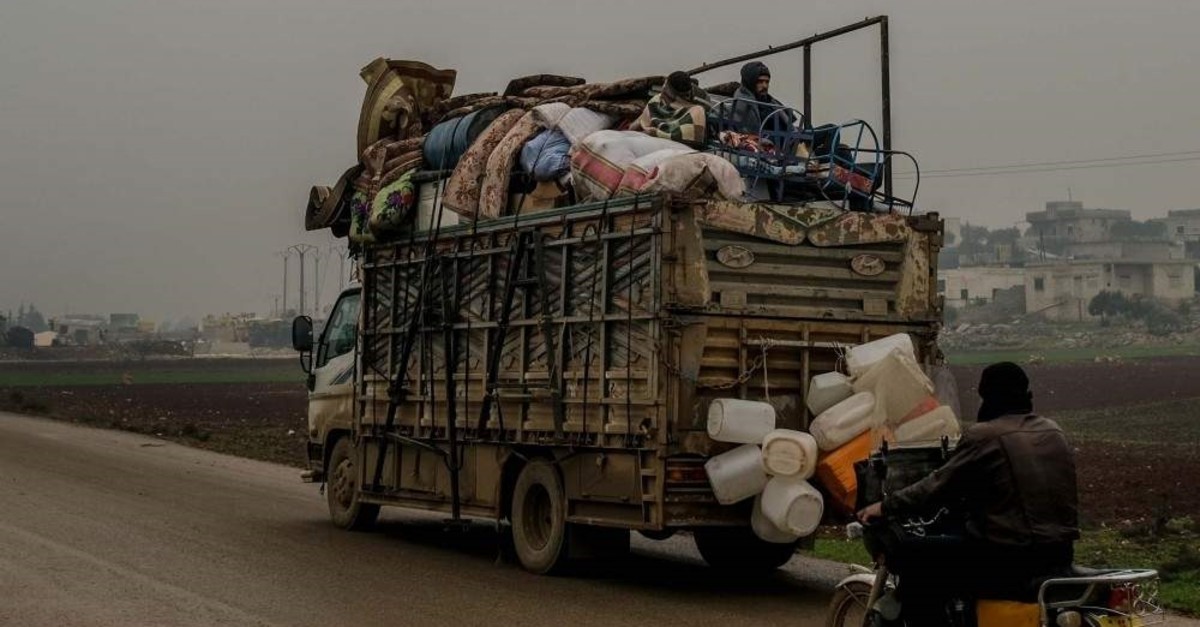 While the last strong opposition bastion Idlib has been surrounded by the advance of Syrian regime forces backed by Russia, displaced civilians who fled their homes to save their lives from regime attacks are in dire need of humanitarian aid.

As regime forces have been getting closer to Idlib city, hundreds of thousands of civilians living in the area have moved toward relatively safer areas near the Turkish border. Those who cannot find shelter live under olive trees or in open spaces. Some have moved toward the liberated areas under the control of the Turkish Armed Forces (TSK). Nearly 1 million displaced civilians have been moving toward the Turkish border, as President Recep Tayyip Erdoğan recently said.

Due to overcrowding and lack of essential infrastructure in refugee camps, displaced civilians have great difficulty in finding places to take shelter. Thousands of families are in dire need of humanitarian aid as they struggle to live amid harsh winter conditions. Although Turkish officials and charity foundations continue their efforts to provide humanitarian aid, there are still thousands more who need urgent assistance from the international community.

Speaking to Sabah daily, Abu Mahya, who fled Saraqib and moved toward the Turkish border, said: “The Syrian regime army bombed all areas we used to live in. Our fields and animals have gone. Our houses were demolished. We waited until the last day not to flee our home, but we had to leave. We have no place to go, no job to do, no life and no future. We do not know where to go and what to do.”
Idlib, the last opposition enclave in Syria, had a prewar population of 1.5 million. The number swelled to around 3 million with new refugee waves after it was designated a "de-escalation zone" under the Astana agreement between Turkey, Russia and Iran in May 2017. The agreement was intended to pave the way for a permanent political solution in Syria. The Turkish military set up 12 observation posts in Idlib's de-escalation zone after the ninth round of Astana-hosted peace talks.

Turkish institutions and nongovernmental organizations recently stepped up their efforts for the humanitarian disaster as many displaced individuals live in harsh conditions lacking basic necessities. Hundreds of trucks of humanitarian aid have been sent, camps have been built and work on permanent housing facilities continues.

Aid agencies and relief groups have warned that further violence could fuel what may potentially become the largest wave of displacement seen during Syria's nine-year civil war.

Most recently, Syrian regime forces entered the strategic town of Saraqib in northwestern Idlib province, in a renewed push by Bashar Assad to recapture the last opposition stronghold despite Turkey’s warnings to pull back its forces from Turkish-manned posts.

Assad's campaign to regain Idlib province has sparked a new exodus of thousands of civilians toward the border with Turkey, which backs some opposition groups fighting Assad.

The mass displacement of civilians in Idlib – one of the largest since the 2011 start of the conflict that has displaced more than half of Syria's prewar population of 20 million – has coincided with a biting winter. The renewed fighting is taking place despite a Jan. 12 cease-fire deal between Turkey and Russia, which back opposing sides of the conflict.

Not possible for Turkey to handle new refugee wave

Underlining “the very worrying situation” in Idlib, Çorabatır said the regime and Russia have been bombing all residential settlements, causing civilians deaths.

In case of a push by displaced Syrians to enter Turkish borders, both Turkey and the international community will face a dilemma, Çorabatır told DW Turkish.

“According to international law, Turkey will have to enter its border gates for people whose lives are in danger, as it did so far. On the other hand, Turkey hosts nearly 4 million people, and this has economic, social and political consequences,” he added.

Touching upon alternative directions that Turkey would follow, he said Turkey will first try to stop this escalation of violence and migration wave by forcing Russia through diplomatic channels to use its impact on the regime. If this will not give expected results, Turkey may direct the migration wave to the areas liberated by Turkey’s previous cross-border military operations.

“If these solutions do not work, Turkey will eventually open its borders. In such a case, Turkey will demand more financial aid from the international community, especially from Germany. Because, Turkey does not have the capacity to host a fresh refugee wave,” he explained.