Displaced civilians flee to save their lives within Idlib's 'open prison' 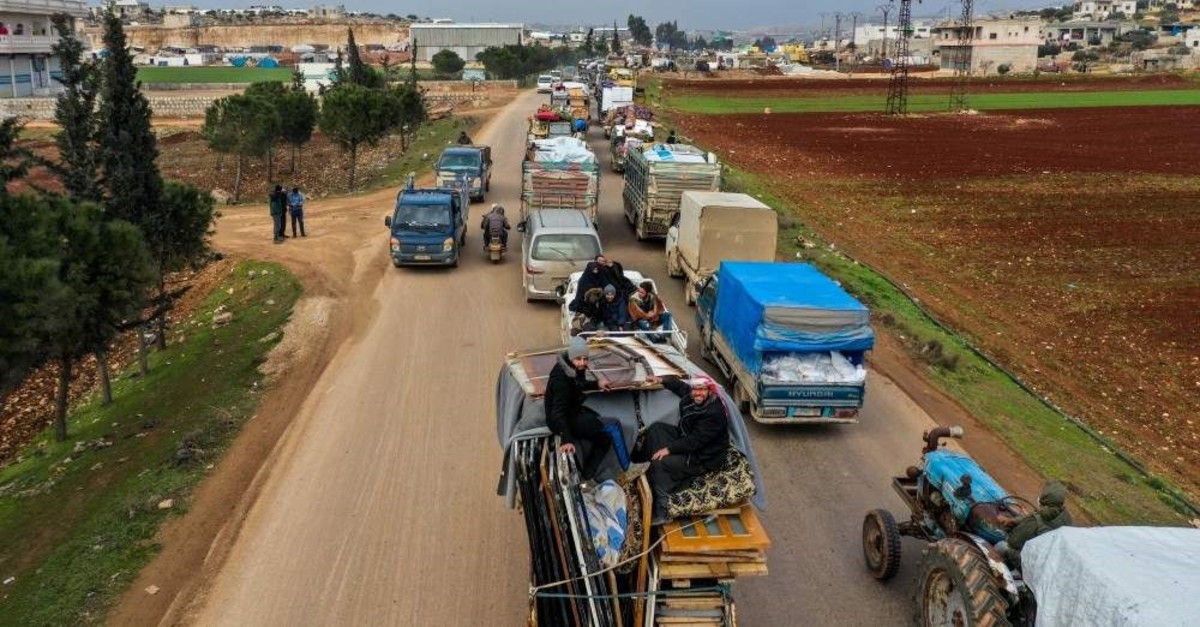 Numerous civilians in Idlib, Syria's last opposition stronghold, have been forced to flee their homes to save their lives from the nonstop regime bombardment. The whole region has become an open prison.

The Russia-backed Syrian regime's advance toward Idlib in recent weeks, by capturing strategic towns, has caused huge panic among the city's civilians.

Continuing their advance from south of the province toward the northern areas, regime forces are currently only 16 kilometers away from Idlib city, home to the largest civilian population in the province. To break the resistance by the local people and opposition armed groups, the regime and Russia are continuously bombarding the region.

Hundreds of thousands of people living in and near Idlib city have fled their homes and started to move toward safer northern areas near the Turkish border. Kilometers-long convoys of vehicles were observed on roads toward the north of Idlib. On their roads, displaced civilians spent their nights in their cars, by the roadsides or in tents built in the open. Severe winter conditions make already bad conditions worse for displaced civilians, as they look for permanent solutions to find shelter.

Likening Idlib to an open prison, local people said they have no place to go and they are stuck in a 30 square kilometer area without any respite. The current exodus is the largest displacement wave since the beginning of the nine yearslong Syrian civil war. Every day, thousands more migrate from Idlib to the "open prison."

Khalil Ibrahim, a displaced civilian from Saraqib, said: "I could not allow enemy soldiers to use my house. I burned down my house and belongings. We have been moving for a week with my family. We spend every night in another place. Today, we have come to the tent camp built by Turkey."

Khalid Abdul Fettah, who fled his home in Aleppo two months ago, said: "We have been going from one place to another for two months. We do not know what to do. We are just looking for a house or a tent to take shelter in. Everyone like us is wandering around without knowing what to do."

Meanwhile, the Turkish Diyanet Foundation continues its humanitarian efforts to help civilians in Idlib. İsmail Yiğit, the Foundation's Syria official, said that the foundation delivered humanitarian aid and food to 100,000 people and provided shelter to 800 families in tent camps so far. The foundation also plans to build houses for 300 families.

Due to overcrowding and lack of essential infrastructure in refugee camps, displaced civilians have great difficulty in finding places to take shelter. Thousands of families are in dire need of humanitarian aid as they struggle to live amid harsh winter conditions. Although Turkish officials and charity foundations continue their efforts to provide humanitarian aid, there are still thousands more who need urgent assistance from the international community. Some displaced people arrived in tent camps along Turkey's borderline and some fled to areas liberated during the Turkish military's Operation Peace Spring and Operation Olive Branch.

Since 2016, Turkey has launched a trio of successful anti-terrorist operations across its border into northern Syria to prevent the formation of a terror corridor: Operations Euphrates Shield (2016), Olive Branch (2018) and Peace Spring (October 2019).

At least 15 civilians were killed in an airstrike carried out by Russia and the Syrian regime in the Idlib de-escalation zone, a Syrian civil defense group announced Thursday.

Turkey, Russia and Iran held meetings in the Kazakh capital Astana (since renamed Nur-Sultan) in 2017 and announced that Idlib and neighboring cities, eastern Ghouta region of capital Damascus and southern cities, namely Daraa and Quneitra, would be designated as de-escalation zones.

However, the Assad regime and Iran-backed terrorist groups launched attacks in violation of the agreements and thanks to Russian air support, gained control of these territories except Idlib.

The Syrian regime and its allies, however, have consistently broken the terms of the cease-fire – including a fresh cease-fire on Jan. 12 – launching frequent attacks inside the zone, killing at least 1,300 civilians since the agreement.

With the latest developments, the number of people displaced from Idlib and Aleppo since the beginning of last year has hit nearly 1.68 million.