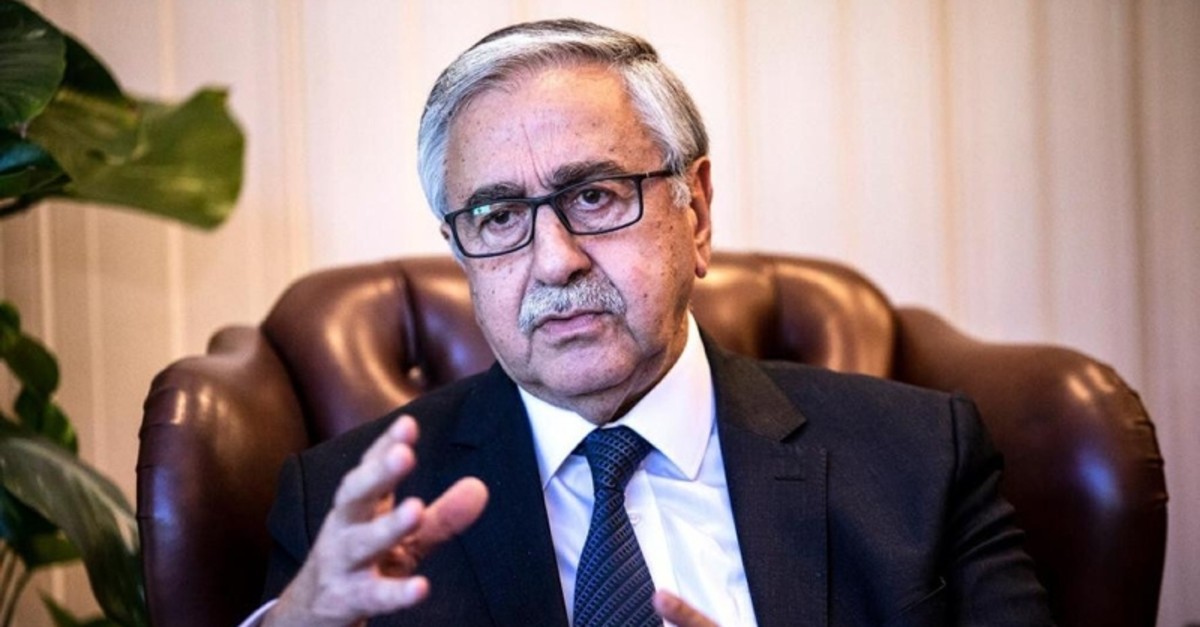 Turkish Cypriot President's controversial remarks on Turkey only a move to have political leverage for the upcoming elections, Mevlüt Çavuşoğlu said

“I have never seen such a dishonest politician in my life. He is using Turkey as a political tool ahead of elections,” Çavuşoğlu said.

“Interestingly, he prefers to attack Turkey. What does Akıncı want to do? Why does he attack Turkey? I want to emphasize that the people of Turkish Cyprus need to think about it,” he added.

The condemnations came after Akıncı talked to The Guardian about the long-standing reunification efforts in Cyprus.

Turkey’s main opposition also reacted to Akıncı's remarks, saying they were “calamitous.”
Speaking on behalf of the main opposition Republican People’s Party (CHP), Faik Öztrak said on Monday that the statements of the TRNC president were “unfortunate and calamitous.”

Evaluating Akıncı's claim, experts say his statement ignores Turkish Cypriot history and overlaps with Greek theses and that Cypriots will provide the best reply to Akıncı in April elections.

Professors Ata Atun and Uğur Özgöker and academician Emete Gözügüzelli conveyed their views to Anadolu Agency (AA) on Akıncı's remark that the “annexation of the TRNC by Turkey will be terrible.”

Atun, dean of the Faculty of Engineering at Cyprus Science University, noted that Akıncı issued a planned and multilayered statement to appeal to some groups.

"Victimization is a situation that makes a splash. As a result of the reaction from Turkey, he has carried out a well-planned act that aims to gain EU and U.S. support. This is a message that says: ‘Look, Turkey is at our necks. Help us keep Turkey away from Cyprus.' A message that says ‘Only I can meet your (EU, U.S.) wishes.'"

"I would like to add this: As Turkish Cypriots, we never think like Akıncı. Akıncı does not represent us. My advice to our kin in Turkey is to spoil his game by ignoring his provocative remarks. Turkish Cypriots will give him the necessary response in the elections," Atun said.

He noted that Akıncı was playing a calculated game.

"Akıncı was trying to find support by decrying Turkey on social media and found some. These statements made by President Akıncı and his spokesperson are purely aimed at obtaining financial, intelligence, media and political support from external sources. His remarks are against international norms and the bond of friendship and peace between Turkey and the TRNC," he added.

Özgöker, president of the Turkish-Northern Cyprus Chamber of Commerce and board member of the International Diplomats Association (DMW), said Akıncı is playing to the audience to gain votes from the left-wing in the April presidential elections in the TRNC.

Speaking about Akıncı's recent comments, Özgöker said: "He warns the West with discourse claiming the TRNC will be the 83rd province of Turkey. If Akıncı is not elected, either Tahsin Ertuğruloğlu, Ersin Tatar or Zorlu Töre, who have nationalist views, will be the one sitting in the presidential chair."

Evaluating Akıncı's comment that "I will not be the man linking the TRNC to Turkey like Hatay," Özgöker said:

"In 1939, with the decision of the Assembly of the Republic of Hatay, Hatay joined the Republic of Turkey. The TRNC is not like Hatay because Hatay was under a French mandate, and there was also the risk of leaving Hatay to Syria while France withdrew from Syria.”

Mentioning that Turkish Cypriots struggled to exist against the Greeks 70 years ago after British colonial rule, Özgöker said:

"The Greek Cypriots had ambitions of linking Cyprus with Greece, that is, Enosis, after committing genocide against the Turkish Cypriots and clearing them from the island completely. However, Turkish Cypriots gave their lives for the motherland with Turkey's great support and resisted this plan, enduring all kinds of persecution and torture.”

“Therefore,” he added, “Akıncı made a very unfortunate statement entirely for domestic politics. Turkish Cypriots are determined to keep the TRNC forever, the independent and sovereign state they established after 70 years of struggle at the expense of their lives. The sovereignty of the TRNC is such a vital issue that it cannot be made an issue for the presidential election.”

“In April, Turkish Cypriots will answer this at the ballot box and punish Akıncı by not electing him," he underlined.

Gözügüzelli, an expert at Akdeniz University's Cypriot Law Faculty, said Akıncı's statement to the British daily newspaper The Guardian also implied that Turkey is possibly making efforts to annex the TRNC, and it is a stance that ignores Turkish Cypriot history and overlaps with Greek theses.

Gözügüzelli said Akıncı was trained and assigned by a nongovernmental organization established by the U.S. to emphasize the idea of a "common motherland, a future without Turkey" that is controlled by foreign powers.

"Akıncı's current attitude cannot be expected to be different. Akıncı tells the public and the world: ‘We have come to the last point. If you do not elect me, there will be a separation.' He acts as if the Greek government has accepted political equality and the rights of the TRNC,” he said.

According to Gözügüzelli, there have been efforts to make it appear that the Greek Cypriot leader agreed with Akıncı and that the only problem is Turkey. “This is unacceptable,” he said. “This attitude is the denial of self beyond the lack of historical consciousness,” he added.

Gözügüzelli said Turkey's reactions were appropriate as it strives to protect the TRNC's international rights and developments in the Eastern Mediterranean.

If the 1974 Peace Operation and guarantee agreement had not been realized, there would be no TRNC, said Gözugüzelli.

Akıncı is the fourth president of the TRNC, an office he has held since 2015. Originally an architect, Akıncı’s political career began with the mayorship of the Turkish side of the capital province of Nicosia, which lasted for 14 years. He was a member of the Communal Democracy Party (TDP), which was founded in 2007 with an emphasis on social democracy and a united Cyprus, until his 2014 resignation. In 2015, Akıncı raced in the presidential elections as an independent candidate and won by receiving 60.5% of the votes in the second round. During his presidency, he gave importance to the resolution of the Cyprus issue and restarted negotiations with the leader of the Greek side, Nicos Anastasiades.