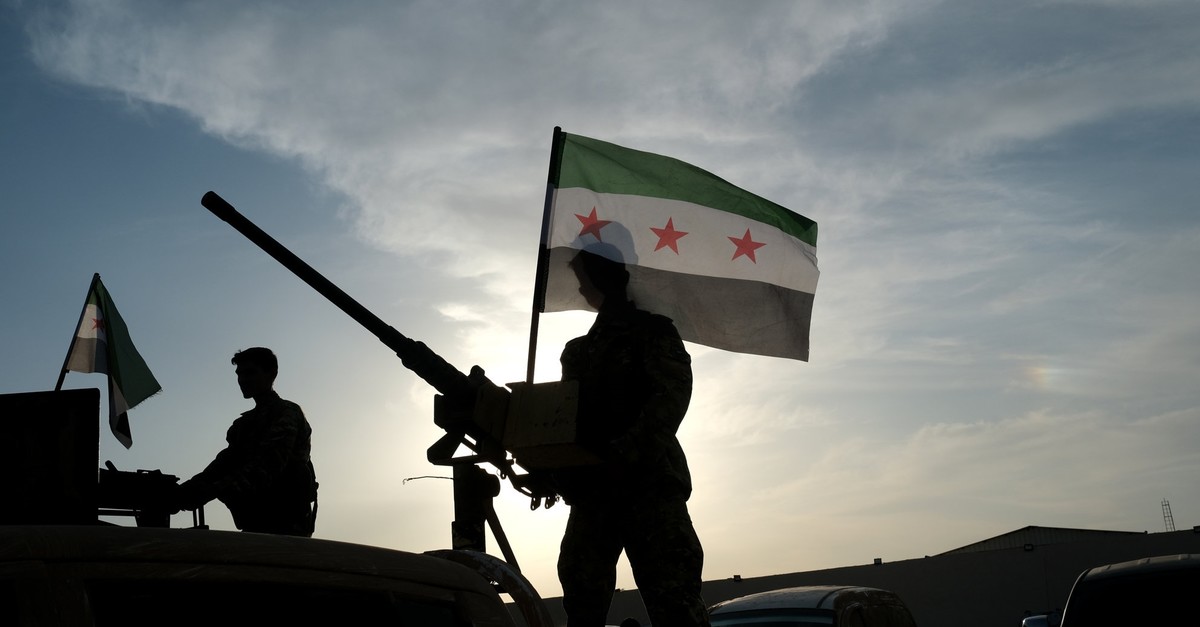 After last week's aggression displayed by the Bashar Assad regime against Turkish troops stationed in northwestern Syria's Idlib as part of Astana and Sochi deals, the Turkish military and Syrian National Army (SNA) launched an offensive to maintain the safety of the Turkish observation posts and to end the long-running slaughter against civilians in the province.

The signals of the offensive were given last week as the Turkish army amassed troops and military equipment in Idlib. According to sources on the ground, nearly 1,000 military vehicles, including howitzers, tanks, armored carriers and heavy equipment, have entered the province from the border cities of Hatay and Gaziantep. The preparations were triggered not only after the regime took the lives of eight Turkish personnel last week but also because the regime forces' seized the strategic town of Saraqib despite persistent warnings from Ankara. 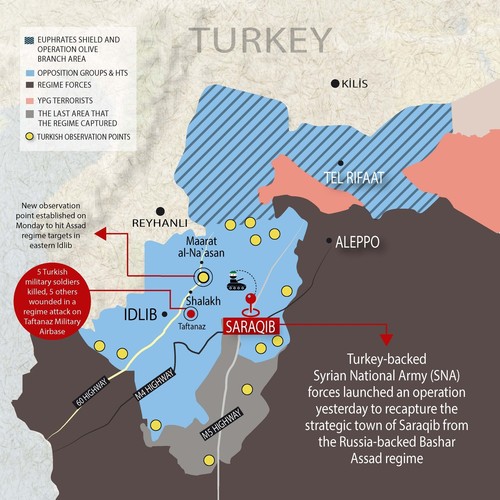 The capture of Saraqib was the regime's renewed push to recapture the last opposition stronghold, which has already displaced hundreds of thousands of people that headed to Turkey's border. After the regime attack on Turkish troops, President Recep Tayyip Erdoğan said Wednesday that the clashes amounted to a "new era" in Syria and that any further attacks on Turkish forces would be "responded to in kind."

Idlib decided upon as a de-escalation area, guaranteed by the Russian government in the bilateral Sochi deal in September 2018 and the trilateral deal between Ankara, Moscow and Tehran. Notwithstanding, Russia has been providing significant air support to the regime in its brutal campaign to capture Idlib, which has intensified after November and culminated in the capture of Saraqib.

The town sits on a junction of two key roads, which the regime is seeking to capture to revive an economy ravaged by almost nine years of war. The M5 connects the capital Damascus to the second-largest city Aleppo in the north, crossing Idlib, while the M4 connects Aleppo with the coastal city of Latakia. The regime was poised to recapture more of the road on Saturday after it overran the area of Al-Eis in south Aleppo province following battles with opposition groups, according to the U.K.-based Syrian Observatory for Human Rights. Al-Eis, which overlooks the M5, lies on a front that saw fierce fighting between the regime and its opponents in 2016.

While the regime and its backers are trying to advance into Idlib some pundits emphasized that the Turkish army and SNA might open a new pocket near Aleppo, the province that opposition forces had withdrawn from in 2016.

Turkish military units stationed at the newly established observation post between Shalakh and Maarat al-Na'asan hit regime targets in eastern Idlib and the Aleppo countryside with rocket launchers, the sources said. Also, during the operation, five Turkish soldiers were killed and five others wounded in an attack by Assad regime forces on Turkish observation point at eastern Idlib's Taftanaz Airport with heavy artillery, the Defense Ministry said Monday.

Defense Minister Hulusi Akar warned on Sunday that Turkey had back-up plans for Idlib and would follow through with them if its warnings remained unheeded. "We have asked our strategic partners multiple times to carry out a joint anti-terror operation to clear terrorists from our border area and told them that we have a Plan B and C if they don't accept our offer," Akar said.

So far, Turkey has carried out three cross-border operations in northern Syria to eliminate terrorists near its borders to ensure national security, aid in the safe return of Syrian refugees and maintain Syria's territorial integrity. These military operations were conducted as individual efforts when Ankara's legitimate security concerns were not addressed by strategic partners despite constant warnings.

Diplomatic efforts with the U.S., Russia

Ankara, on the other hand, continues diplomatic efforts with Russia to find a political solution to the looming crisis. Delegations from Turkey and Russia met on Monday for a second time following a weekend session in the Turkish capital Ankara.

The delegations discussed steps to boost the political process in the war-torn country in a three-hour meeting Saturday which stressed the need to ensure peace on the ground. They decided to resume talks in the coming weeks.

The Russian side – chaired by Deputy Foreign Minister Sergey Vershinin and Special Envoy on Syria Alexander Lavrentiev – comprised of representatives from military and intelligence circles.

Foreign Minister Mevlüt Çavuşoğlu said Monday that there had been no consensus with the visiting Russian delegation so far regarding the escalating situation in Idlib, Syria.

Jeffrey told a news briefing in January that the Syrian regime and Russian warplanes had hit Idlib with 200 airstrikes "mainly against civilians" in the past three days.