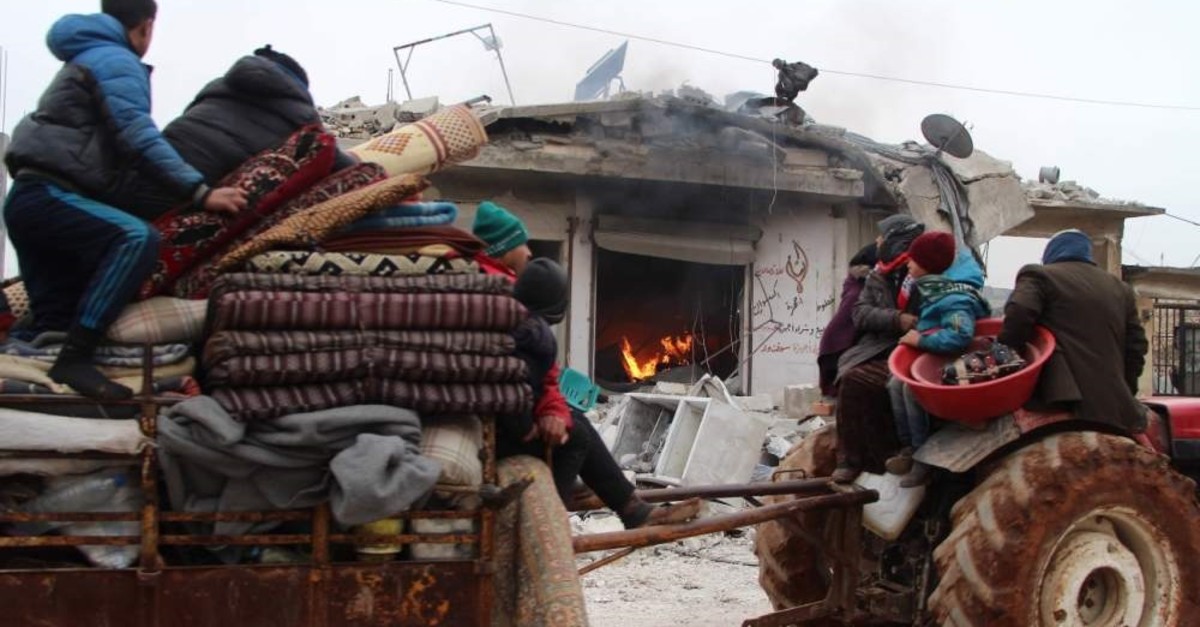 Displaced Syrians pass a house still on fire as they flee shelling on the town of Abyan, in the western rebel-held part of the northern Syrian province of Aleppo, near the border with Turkey, Feb. 13, 2020. (AFP)
by Anadolu Agency Feb 13, 2020 6:17 pm

Germany called on Russia on Thursday to use its influence on the Syrian regime to stop its offensive in northwestern Syria.

"These attacks must be stopped," German Foreign Minister Heiko Maas said in an exclusive interview with the German daily Suddeutsche Zeitung.

"We are now witnessing another dramatic escalation of the situation in Idlib, and it is reaching the level of a humanitarian catastrophe," he warned.

Almost 1.5 million Syrians have moved near the Turkish border due to intense attacks in recent months, sparking fears of a new refugee influx toward Europe.

Germany's top diplomat, during his recent conversations with Russian counterpart Sergey Lavrov, said he conveyed his government's concerns and expectations.

"Assad doesn't care about the death of vulnerable people in a cruel way. Russia must use its influence on the regime," he stressed.

Maas made the remarks ahead of the Munich Security Conference, the world's biggest security conference bringing together political and military leaders from all over the world, on Feb. 14-16 in Munich.

Turkish Foreign Minister Mevlüt Çavuşoğlu, U.S. Secretary of State Mike Pompeo and Lavrov are among the top officials expected to attend the conference.

Syrian regime attacks in recent weeks on Turkish troops stationed in Idlib have further sparked tensions in the region.

On Monday, five Turkish troops were killed and five injured in an attack by Bashar Assad regime forces in Idlib, following a similar attack last week killing seven soldiers and a civilian contractor working with the Turkish military.

The Turkish troops are in Idlib – a cease-fire zone – under a deal between Turkey and Russia, as part of an anti-terror and peace mission.

Turkey has since retaliated against both attacks, hitting scores of targets and killing some 200 Assad regime troops.