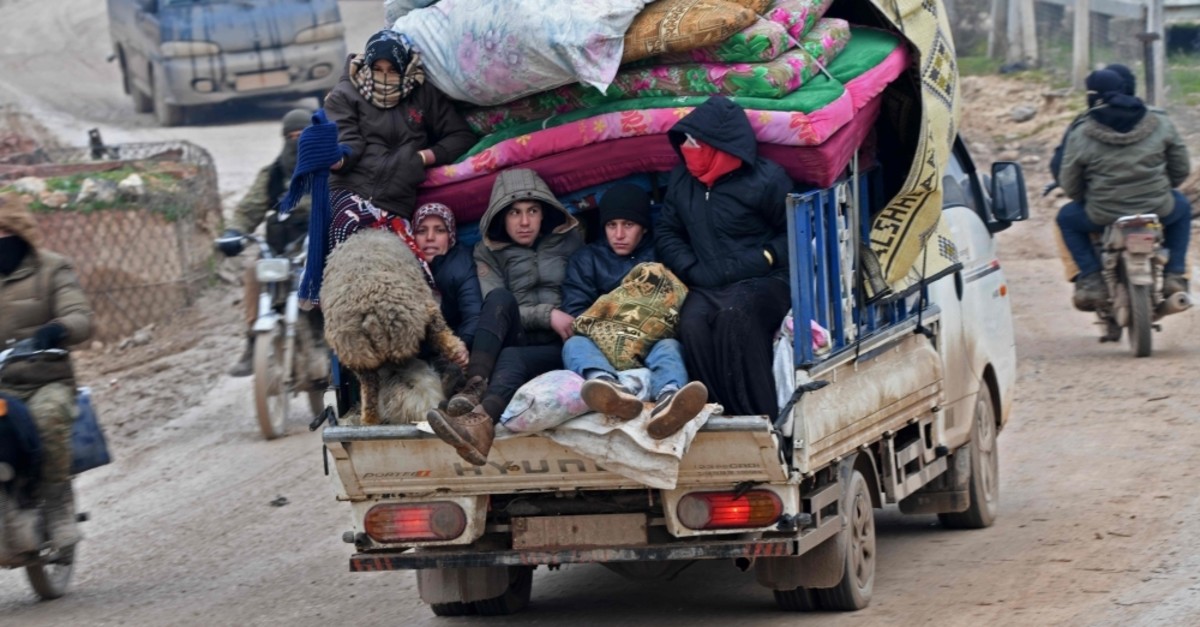 The Assad regime's horrific attacks targeting civilians in northwestern Syria's Idlib continue, with nearly 140,000 more civilians displaced over the last three days alone due to ongoing violence. Idlib is on the brink of a further humanitarian catastrophe due to the Russian-backed regime's ceaseless attacks, with displaced civilians losing their lives amid the harsh winter conditions as they try to flee bombardments.

As part of their advance toward the city of Idlib from south of the province, regime forces have been continuously bombing residential areas, turning many settlements into ghost towns.

If regime forces capture al-Atarib, they will be stationed only 10 kilometers away from the main road which civilians are using to flee toward the Turkish border and which Turkish Armed Forces (TSK) use for the military deployment to the region.

Turkish military forces have been deployed to the village of al-Jınah, 4 kilometers away from al-Atarib, in order to set up a base to stop the regime's advance.

Turkish soldiers there have also helped displaced citizens carry their belongings on the way toward the areas of relative safety near the Turkish border.

Turkish troops are in Idlib, nominally a cease-fire zone, under a deal between Turkey and Russia as part of an anti-terror and peace mission.

Families fleeing airstrikes and advancing troops in Idlib province are sleeping rough on the streets and in olive groves, burning toxic bundles of rubbish to stay warm in the biting cold, aid workers say.

Vast convoys of families with mattresses stacked on trucks trekking across the war-torn province have been witnessed by reporters across the region, amid an unusually bitter winter.

Many are sleeping in cars and in fields despite snowfall and sub-zero temperatures, raising fears of a major humanitarian catastrophe.

Recently, a father with his two children, who had to flee their homes due to the regime attacks, lost their lives to cold on the same bed. Another 1.5-year-old girl named Leyla froze to death with her eyes open.

More than 800,000 Syrians, mostly women and children, have fled their homes during the Russian-backed Syrian regime military campaign to clear the opposition groups in northwest Syria since Dec. 1, a senior U.N. spokesperson said Thursday.

The exodus is expected to continue, with thousands of people on the move as whole towns and communities flee to the safety of areas near the Turkish border, David Swanson, the U.N. regional spokesman for Syria, told Reuters.

"Tragically, the number of people displaced – the vast majority of them women and children – has now surpassed 800,000," Swanson said.

Russian jets and Syrian regime artillery have pounded towns and villages since early December in a renewed assault backed by pro-Iranian militias and aimed at clearing the opposition.

"Residents are fleeing by the thousands in open trucks or by foot, often at night to escape detection despite the bitter cold temperatures," Swanson said.

The United Nations Office for the Coordination of Humanitarian Affairs (OCHA) estimated that some 82,000 people are sleeping in the open air.

"Shelter is the most urgent need, as millions of people have been pushed into small areas not equipped to support that many people, especially during the cold winter," OCHA said.

It called the situation in Idlib "one of the worst" crises in the nine-year war.

U.N. officials say the region is on the brink of a humanitarian catastrophe. Those on the run in Idlib and the neighboring Aleppo province are joining close to 400,000 people who fled earlier bouts of fighting to the safety of camps near the Turkish border.

International aid organizations have called for a halt to the violence.

The latest offensive has brought the military campaign closer to heavily populated northern Idlib along the border, where nearly 3 million people are trapped, according to the United Nations.

Idlib has been a stronghold of the opposition and anti-regime armed groups since the outbreak of the Syrian civil war in 2011.

The area has become a refuge in recent years for people fleeing or being evacuated from previously opposition-held areas elsewhere in Syria. But now that Idlib is under attack, there is nowhere left to go.

But more than 1,800 civilians have been killed in attacks by the regime and Russian forces since, flouting a 2018 cease-fire and a new one that began on Jan. 12.

The conflict in Syria has killed more than 380,000 people since it erupted in 2011 following the brutal repression of popular demonstrations demanding regime change.

More than half of Syria's population had already been displaced, but the latest regime offensive against the country's last opposition enclave has sent the numbers soaring again.