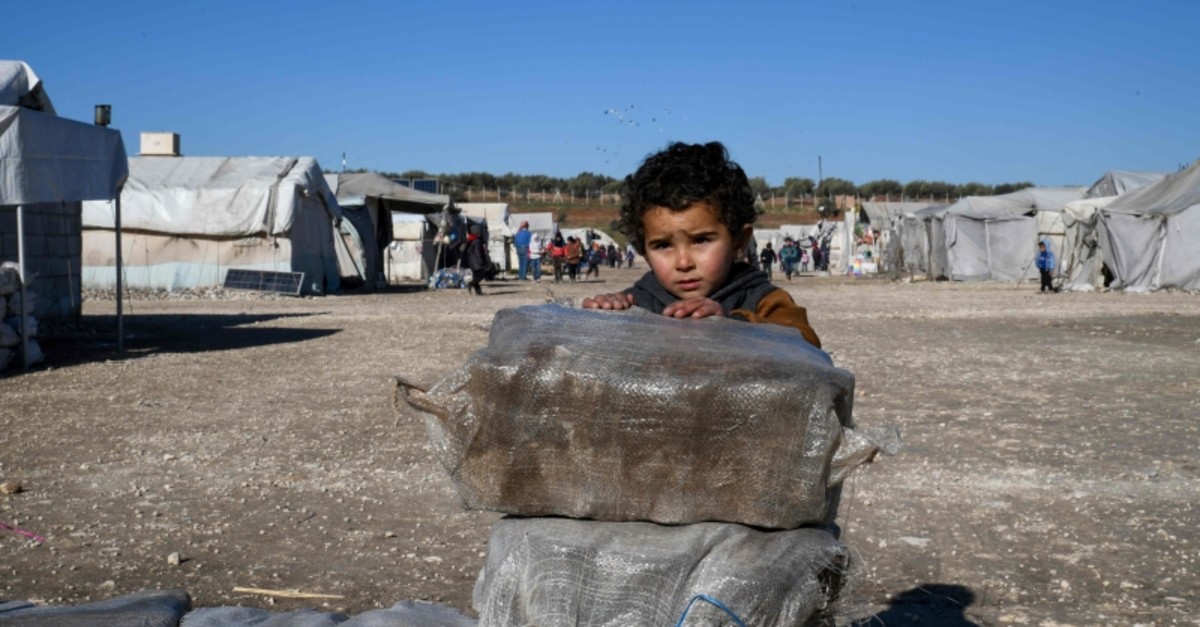 A displaced Syrian boy stands next to bags of aid at a camp for the internally displaced near Dayr Ballut, near the Turkish border in the rebel-held part of Aleppo province on February 9, 2020. (AFP Photo)
by Daily Sabah Feb 16, 2020 3:52 pm

Urgently needed aid deliveries to civilians in northwest Syria's Idlib province have resumed after a brief pause in distributions due to escalating tension, the World Food Programme (WFP) announced on Friday.

"WFP lorries have resumed their distribution work after a 24-hour pause," WFP spokesperson Elisabeth Byrs told journalists in Geneva. "This shows the difficulties that WFP and its humanitarian partners are facing in the field to help people, a lot of whom have been displaced many times."

The de-escalation zone has seen an uptick in violence recently as the Bashar Assad regime and Russia launched several airstrikes and offensives against civilians in an attempt to gain control of the strategically significant province.

Amid the ongoing hostilities, which follow almost nine years of war in Syria, U.N. Special Envoy for Syria Geir Pedersen has appealed for a lasting cease-fire, his spokesperson said.

"He continues to appeal for an end of the hostilities, noting that it's imperative to de-escalate the situation in the northeast," said Jenifer Fenton, spokesperson for Pedersen.

"He again continues to say that there is an urgent need for a sustained cease-fire and immediate, unfettered humanitarian access to the civilian population...He continues to engage with all concerned parties to try to de-escalate the situation and call for the protection of civilians."

Asked about the possible reconvening of the Syrian Constitutional Committee at the U.N. in Geneva, Fenton said that he had been working to "renew progress" in the political process.

"There is a need to build trust and confidence which can contribute to opening the door to a broader political process," she maintained.

Hundreds of thousands of people have fled Idlib province in recent weeks as Russian jets and Syrian artillery pounded towns and villages in a renewed government assault aimed at clearing the opposition. Senior U.N. officials said this month that the humanitarian situation had become more acute with at least 300,000 civilians now on the run in Idlib province, adding to the more than half a million people who fled earlier bouts of fighting to the safety of camps near the Turkish border. The latest offensive had brought the Russian-led military campaign closer to heavily crowded parts of Idlib province, where nearly 3 million people are trapped, the vast majority of whom are women and children, according to the U.N.

The Turkish Red Crescent (Kızılay) on Sunday distributed tents and heaters to Syrians fleeing clashes in and around Idlib while the aid agency also distributed beds, blankets and food to people in the Mashhad Ruhin area, close to the Turkish border.

Hakan Sarı, head of the Turkish Red Crescent's border assistance operations, said most people had to flee to the north due to clashes and heavy bombings in Idlib.

"We supply tents, particularly to families without tents, so they can pitch them under the olive trees," Sarı said.

The aid agency also distributed hygiene materials, as well as cookies and chocolate for children.