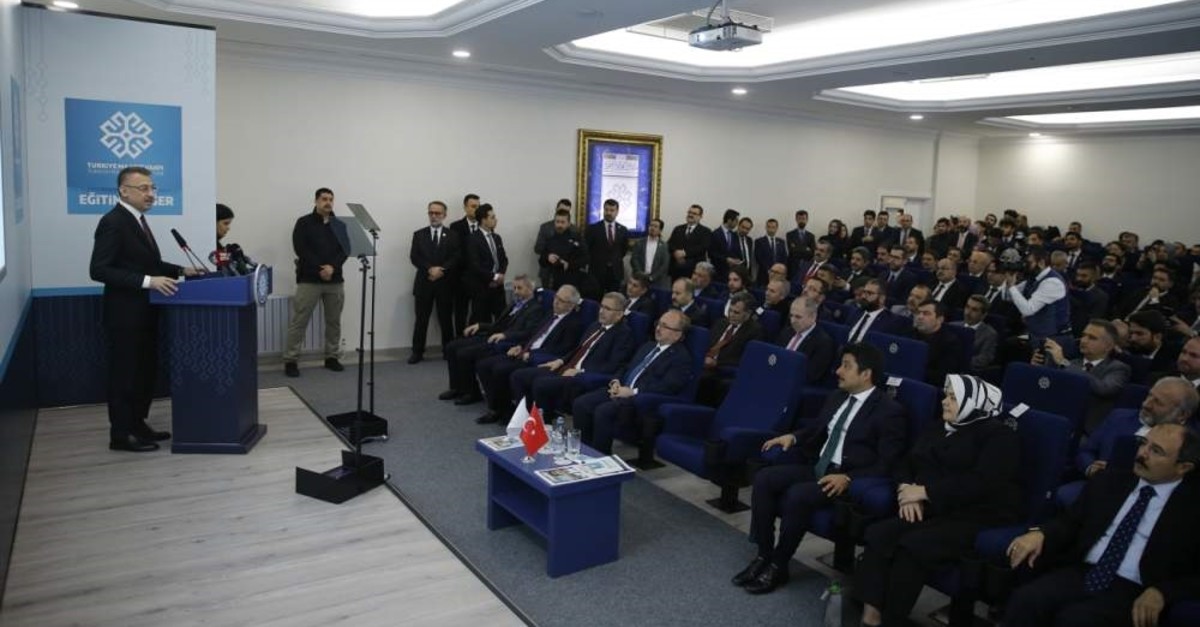 Turkey’s Maarif Foundation is an “antidote” against the “poison” injected by the Gülenist Terror Group (FETÖ) into Turkey and the whole world, Vice President Fuat Oktay said Monday.
The Maarif Foundation on Monday opened its eighth Country Representative Consultation Meeting in Istanbul.
Speaking at the event, Oktay said: “This is actually not just a poison within Turkey or against Turkey. Wherever they operate, they inject this poison into that country. Unfortunately, they continue to do so in countries they are currently active in.”

Oktay underlined that it took the Maarif foundation only three-and-a-half years to build official contact with 104 countries, open representation offices in 51 and operate in 66 countries. “In 19 countries, 213 FETÖ-linked schools have been taken over by our Maarif Foundation and protocols have been signed with 40 other countries for the transfer of these schools. In this rapid success, the contributions of the Maarif administration and country representatives have historical importance.”

Speaking at the same event, Maarif Foundation chair Birol Akgün underlined that the foundation has a comprehensive education network serving nearly 40,000 students with its 323 educational facilities and 42 dormitories in 43 countries. It currently has nearly 7,000 employees.

“We serve world peace by educating virtuous and good people and building friendly relations between our nation and other nations. We are aware that the world needs this,” he said.

Akgün also said that they know that the best weapon to defeat terrorist groups like FETÖ, the PKK and Daesh, and international threats like racism, xenophobia, Islamophobia and discrimination is to increase the number of good people with education worldwide.

The foundation’s eighth Country Representative Consultation Meeting is scheduled to take place between Feb. 17 and Feb. 21.

The Turkish government set up the Turkish Maarif Foundation soon after the FETÖ-orchestrated 2016 defeated coup, to administer overseas schools linked to the terrorist group.

The foundation has also established schools and education centers in various continents, from Africa to Asia, since its foundation in 2016.

FETÖ and its U.S.-based leader Fetullah Gülen orchestrated the defeated coup in Turkey, which left 251 people dead and injured nearly 2,200.

FETÖ also has a considerable presence outside of Turkey. It runs a chain of private schools that serve as a revenue stream for the terrorist group.

These schools abroad are being transferred to the Turkish state-run Maarif Foundation.

FETÖ was also behind a long-running campaign to overthrow the government through the infiltration of Turkish institutions, particularly the military, police and judiciary.